Veterans Leverage Their Leadership In the Classroom

"You Served For America, Now Teach For America" brings vets to the classroom 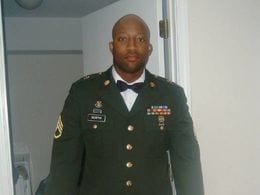 Like all good stories, this one starts with a girl.

In the midst of my eight years of active duty in the U.S. Army, an old girlfriend (who also happened to be a TFA corps member) would always say to me, “You’re a military dude, they could use your leadership in the classroom!” Her words changed my journey.

In 2011 I had been in the classroom for two years and was teaching at Prestige Academy Charter School in Wilmington, Delaware. I was pondering my next steps and asked a TFA talent recruiter if there was a job where I could work to bring more veterans to the corps. No such position existed. So I remained in the classroom. A year later I received an email that TFA was looking to launch a role to recruit veterans. This was where I needed to be.

I put together a proposal outlining what it would take to invest more veterans in our mission—a national campaign, the support of the veterans’ community, and going into spaces TFA had never gone before.

Now that proposal has turned into the veterans’ recruitment initiative that I lead: “You Served For America, Now Teach For America.”

Getting the veteran community on board with TFA was easy. Because of existing organizations like Troops 2 Teachers, people were already aware of the incredible strengths veterans bring to the classroom. Within months of launching in November 2012, we heard from Joining Forces, the First Lady and Dr. Biden’s initiative to mobilize all sectors of society to give our service members and their families the support they’ve earned. We quickly gained 100 allies in the veteran space encouraging their audience to consider teaching as a continued form of service. That’s a powerful thing.

With the community on board, the biggest obstacle, ironically, was that the veterans I first spoke with didn’t know how much they brought to the table. In their minds, there was nothing special in removing mines or bringing supplies to a devastated community – they were just doing their jobs. I needed to make them see what others saw: that their leadership was extraordinary and could be leveraged to close our country’s educational opportunity gap.

Veterans have what many civilian organizations would deem a “nontraditional: background. Many spent a decade or more in service before pursuing a college degree, or have spent so long in service that they question whether their skills match a civilian job sector.

In order to convince them of their value, I threw my full weight into recruiting. I’ve met hundreds of veterans at campuses and military bases, many who have told me the same thing. “Teaching is something I’ve always wanted to do, but never thought I’d have the chance to.” TFA gives them an avenue to fulfill that dream.

Now we have nearly 200 veterans in our program.  And those TFA servicemen support each other. Less than 10 percent of the country serves in the U.S. military – we’re a unique breed, and enjoy an instant recognition and comradery. I might fly my Army Pride, but I’ll drop everything to help out a Navy or Air Force teacher down the hall. With our veteran teachers one phrase comes to mind: got your six.

At the end of the day, veterans are broken up by branches and rank, but we’re all united in our service. This Veterans Day I salute all veterans, especially those continuing to serve in the classroom.