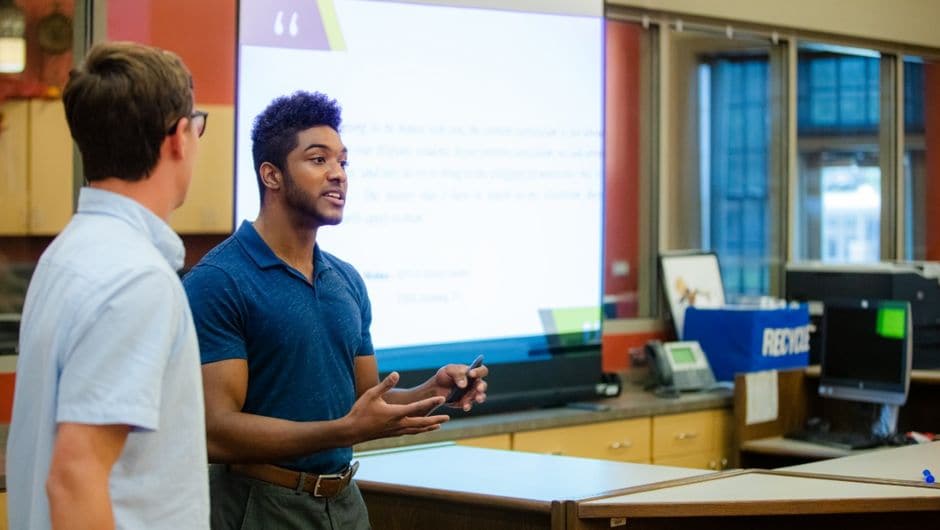 At Chicago International Charter School (CICS) Washington Park, an elementary school founded by a Teach For America alum, located in Chicago’s South Side, the motto is that kids will get to—and through—college.

“We preach it every day, and every day, the kids respond back with a chant: Hungry for knowledge to get me to college,” says Alyssa Kirshenbaum (Greater Chicago-Northwest Indiana ’18), a third-grade teacher at the school.

But in casual conversations with her students at dismissal or lunchtime, Alyssa finds they often didn’t have much knowledge about college. Asked where they wanted to go to college, students would respond with the names of their siblings’ high schools, or with the names of local colleges and universities—Spellman, Northwestern University, and so on—that double as classroom names at CICS Washington Park.

“They did not know—either because their families haven’t gone to college or simply because they just were not exposed to it—about college,” Alyssa says. “If we’re going to preach college, and talk about how important it is, we have to prepare kids.”

“If we’re going to preach college, and talk about how important it is, we have to prepare kids.”

Preparing Kids at a Young Age to Think About College

That needs to start early, since high school guidance counselors note that ninth grade is too late to begin the college conversation. Alyssa was eager to design a curriculum that would turn college from a far-away future aspiration into something achievable, with set steps (determine what type of school makes sense for you, evaluate finances, put in applications, and so on).

The hold-up for Alyssa in drawing up a curriculum was a lack of available time to devote to digging into the project.

Enter the Accelerate Fellowship. This Teach For America summer internship offers undergraduates heading into their senior year an opportunity to do hands-on work relating to educational equity.

“The main thing that sold me on the fellowship was the ability to have an interest of mine be my main focus throughout the summer and have a tangible impact on the communities we were going to be involved in,” says Isaiah Rutledge, who is slated to graduate from University of California, Los Angeles in 2020.

Alyssa knew about Accelerate because she, too, was a fellow. In fact, it’s why she’s a corps member today: fellows have the opportunity to receive an offer to the corps upon successful completion of the fellowship. Isaiah likewise plans to join the corps after he graduates: He has been offered a position with Teach For America New York thanks to this program.

“Because I did the fellowship, I had my acceptance [to Teach For America] in August, and I did not apply to other jobs,” Alyssa says.

During the summer-long Accelerate Fellowship, participants work on projects with TFA partner organizations (including schools, nonprofits, and programs led by TFA alums) in multiple locations. Fellows may start their time in New Mexico, then spend time working in Nashville, for instance.

For Isaiah, the ability to work in both rural and urban environments through the fellowship was a big draw. Before working with Alyssa at CICS, Isaiah did a week-long stint at Steel City Academy, a charter school founded and led by TFA alums in Gary, Indiana. 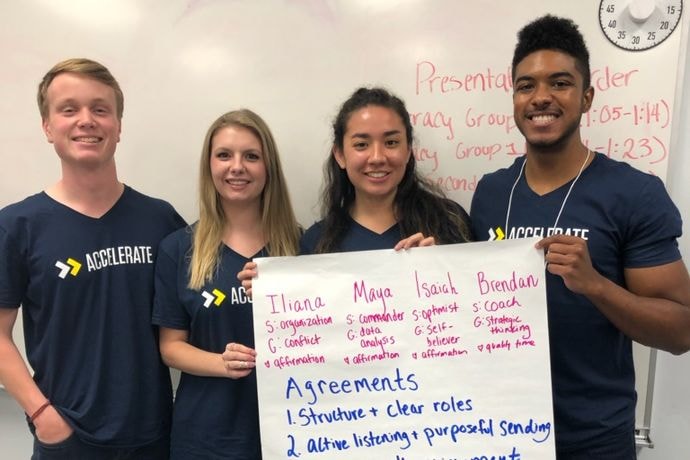 Last year, there were 31 fellows in the program. For the four fellows who worked with Alyssa in Chicago this past summer, the goal was clear: develop a curriculum for third-graders that would increase student’s knowledge about college.

“I designed this project with a wide goal and a lot of open ends for the fellows to take it as they will,” she says. “They designed an incredible program.”

To start, the fellows gathered information. “We went into two different schools in the community,” Isaiah recalls. Fellows visited a charter school as well as an alternative high school for students who were returning to the classroom after having dropped out previously. The fellows asked teachers and guidance counselors what students already know about higher education and what would be helpful for them to know at a young age.

One common thread of feedback was around finances—often, students were informed about college, but they (and their parents) weren’t well-versed in the financial aspects. This led to the fellows’ first project, creating a parent guide full of details on the financials, scholarship opportunities, and other essential information about higher education. “We wanted to start a conversation about the financials of college early on,” Isaiah says.

The next project was building an entire curriculum. In it, students will start by choosing between four options to pursue after high school: four-year college, two-year college, vocational school, and a military school, says Isaiah. The curriculum involves watching videos of the fellows describing their college experience, doing activities, and researching online. Students create a final project—a poem, poster-board, essay, and so on—with the goal of presenting them in front of the school. That way, says Isaiah, the whole school can hear about the third graders’ plans for their futures.

“This would be an opportunity for younger kids who haven’t heard about college, or vocation, or other terms, to get primed to understand these ideas,” Isaiah says—and inspires them to also look forward to doing their own presentations once they hit third grade.

The fellows worked independently, Alyssa says. She talked to them about the “why” behind the curriculum, and then gave them a broad outline of what she hoped to see, and set up the visits with schools and programs in the South Side. She describes herself as a point person to the fellows—but not a micromanager.

“The fellows took it upon themselves to decide who would do what. I was not over their shoulders saying who needs to do what or who needs to work together—they were able to maturely decide that on their own,” Alyssa says. “They took the curriculum way, way further than I would have imagined.”

She notes that it was an advantage to be able to have people currently in college share their personal experiences.

“I wanted to give the fellows a chance to lead, and let them bring ideas to the forefront,” Alyssa says. Taking risks and learning from them translates into important skills when it’s time to lead a classroom, she adds.

“Because we have the fellows, and because of their hard work, the lives and education of students will be positively impacted.”

Implementing the Curriculum: A Pilot Program to Start

Sometime after this school year’s spring break, Alyssa plans to kick off the curriculum.

Alyssa is starting small this year—the curriculum is only being used in her own classroom. She wants to test it out and refine it with her own students before sharing the curriculum with others. “Next year, once it’s refined, it will hopefully be implemented network-wide,” she says.

The Accelerate Fellows were essential to making this curriculum available—first to Alyssa’s students, and then hopefully to an even larger number of students in Chicago’s South Side. In fact, says Alyssa, they were indispensable.

“I’m going to be very honest, it would not have happened without the fellows,” she says. “Because we have the fellows, and because of their hard work, the lives and education of students will be positively impacted.”

Isaiah feels deep pride in what he and the other fellows accomplished over the summer. “I was able to grow a lot,” he says. “Overall, I think it was easily one of the best summers I had while in my undergrad, and if I could do it again, I would.”

Learn more about the Accelerate Fellowship.