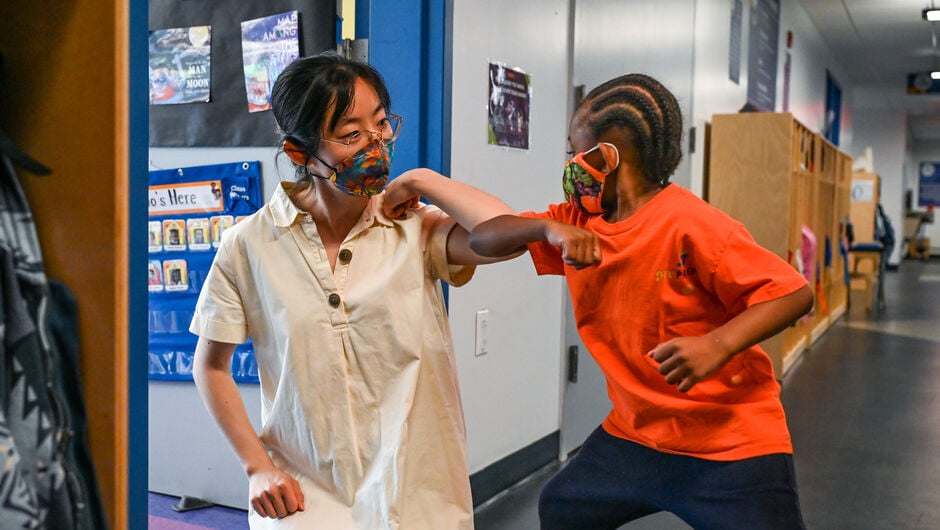 Since 1990, Teach For America New York has worked hand in hand with partners throughout our city to create opportunities for children in our most underserved communities.

Alongside the communities they serve, New York alumni and corps members have played an integral role in supporting the academic gains and educational progress New York has made since 1990.

Teach For America teachers and leaders have helped to create a culture of learning and excellence for students at Vista Academy in East New York.

New York City has made significant progress in education. Over the past decade, we have seen record-level high school graduation rates, as well as gains in college and career readiness among New York City students. New York City’s promise of universal pre-kindergarten has resulted in an increase in the number of 4-year-olds enrolled in pre-K from 20,000 in 2014 to more than 70,000 in 2017, setting future generations up with a strong foundation in their early education.

Teach For America New York’s almost 6,000 corps members and alumni are among the countless educators, activists, parents, and community leaders who have pushed to raise the bar for educational excellence in our city, and remain committed to supporting the work of making educational equity a reality in New York.

TFA NY focuses its presence in low-income schools, hard-to-staff subjects, and neighborhoods where the need is greatest. We deliver data-driven, culturally responsive programming that provides corps members with the skills they need to understand community context and immediately impact student success. Together, they are meeting critical needs in NYC:

Read our Annual Report to learn more about the positive changes our corps members, alumni, partners, and staff are creating in NYC.

Schools to Learn From

A number of Teach For America New York partner schools have been selected for Teach For America's Schools to Learn From program for providing an excellent education to their students. These schools serve as "learning laboratories" on pedagogical best practices and vision for other educators across the nation. Past New York selected schools in the Schools to Learn From program include:

In the past five years, 6 alumni-led schools in New York City were recognized by the Department of Education’s Showcase Schools program, with two out of the six being selected as Showcase Schools over multiple years of the program.

Stories of Our Impact

Searching For A Third Way to Measure Success

Finding My Career Calling Through Teach For America

Finding My Role in the New York City Alumni Movement