Students at a young school united to protest the construction of a dump nearby. Luckily, a trio of student power-podcasters were there to record the drama. 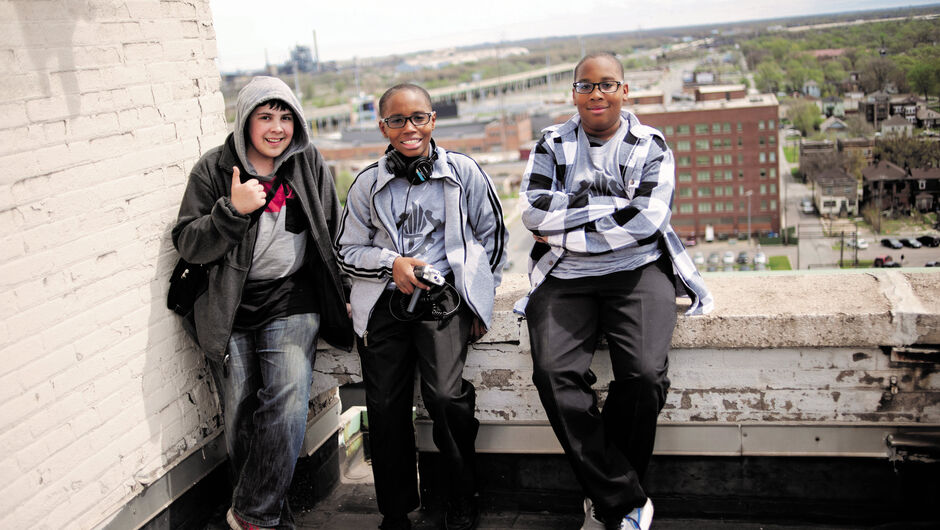 If you visit Steel City Academy in Gary, Indiana, be prepared to have a microphone thrust in your face. The hand at the other end of the voice recorder will belong to one of the school’s trio of friendly, confident student podcasters: ninth graders Erin and Evan Addison (twins) and their best friend Andrew Arevalo.

No matter where these three go, they can be found recording sound (with equipment they got from a Chicago radio producer named Bill Healy). And they go many places. Their principal, Katie Kirley (Chi-NWI ’07), gives them license to roam the school and report on happenings, like the time Steel City adopted Joy, a Goldendoodle dog. They even recorded from the top of a downtown bank building where Evan rhapsodized at the sight of Gary spread out below them, and described what he was feeling: “That breezy feeling, like you want to spread your arms and feel the wind.”

They recorded themselves visiting Gary City Hall, where they filed requests under the Freedom of Information Act for public records of emails sent by the mayor and City Council members. That moment became a soundbite in the biggest story of the trio’s podcasting career: their account of how the families of Steel City Academy helped persuade the government of Gary to, at least temporarily, rescind a permit for a company to build a dump near their school. (The City Council later reversed that decision and reinstated the permit.)

So how did this school, opened less than three years ago, produce a student podcast cited by The New York Times as one of the ten best in the nation? Two words: mission and ingenuity.

First, mission. Inspired by the design of the Native American Community Academy in Albuquerque, New Mexico, the school’s founders placed at the core of their student achievement strategy a commitment to give students the access and freedom to discover what they want to know, to practice what they love to do, and to develop and express their cultural identities. (No uniforms here.)

Students from Steel City Academy in Gary, Indiana, document the fight to keep a waste processing facility from operating across the street from the school.

The ingenuity is budget-related. Steel City launched as a non-networked charter school with lean staffing and limited bucks (especially in year one) for teachers. And so for one week each quarter, teachers suspend their regular classes and draw on every relationship they have to import professionals who introduce kids to their jobs, passions, skills, and life stories. During the most recent “Gear and Flame Week,” 46 community members taught sessions, led trips, or brought students to their colleges and workplaces.

One of those original visitors was Bill Healy, the Chicago public radio producer who came to help Erin, Evan, and Andrew script and edit the episode on the dump fight. Healy and the guys have been working together for two years. On his first visit, Healy (who teaches audio production to journalism students at Northwestern University) thought he was coming to do a career day drop-in, and that would be the end of that.

But when he wrapped his session on audio recording that day, Erin (then in seventh grade) wouldn’t get up and go to lunch. Erin told Healy he wanted to keep going. In fact, he wanted to produce a show about his new school. Would Healy help him? 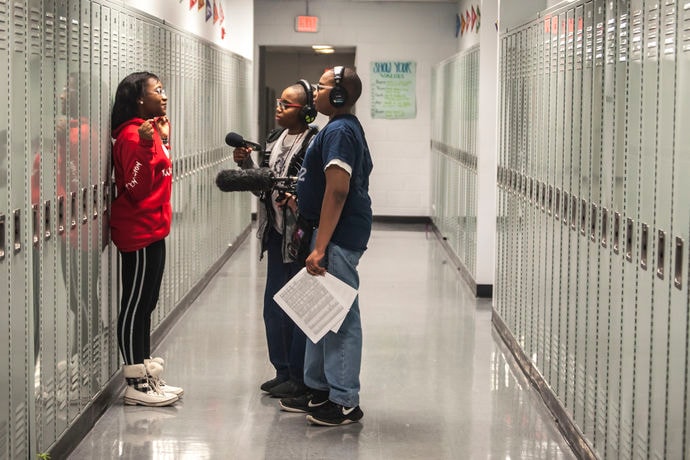 So, impressed by the seriousness of Erin, his twin, and his best friend, Healy keeps returning to Steel City for production sessions with the students. He says he’ll keep coming until they finish high school.

The team had produced six shows by the time in January when Healy came for a production meeting on a new episode that would cover the biggest story of the past year at the school. Andrew handed him a memory card containing hours of recordings students had made at hearings and rallies. What had happened was this: a company had gotten a permit from the Gary City Council to build what it called a recycling center for heavy waste materials to be shipped from Chicago to a plot by the school. Teacher Daniel O’Brien (Chi-NWI ’16) told the students in his Year Zero Environmental Justice club about that, and students, parents, community partners and staff members began to organize protests that eventually brought busloads of parents to public hearings. The City Council pulled the recycling center permit in October, then reinstated it in February, and so the story continues.

So on this day in January, Andrew worked with his mentor on the script of the podcast “Steel City Academy vs Maya Energy,” while Erin and Evan interviewed student protest leaders. As the school day was ending, the four were planning to meet for a Saturday edit session. Listen to the podcast on SoundCloud to judge if they succeeded in their goals for the episode, which were these:

Ground listeners in the moments. Give them mental images. Bring up emotion. Give details. Stay focused on inspiring and empowering.

This article has been updated and revised since publication in the Winter 2019 print edition of One Day magazine.