With Teach For America alums in key leadership roles in the state, there’s never been a better time to join TFA in Rhode Island. 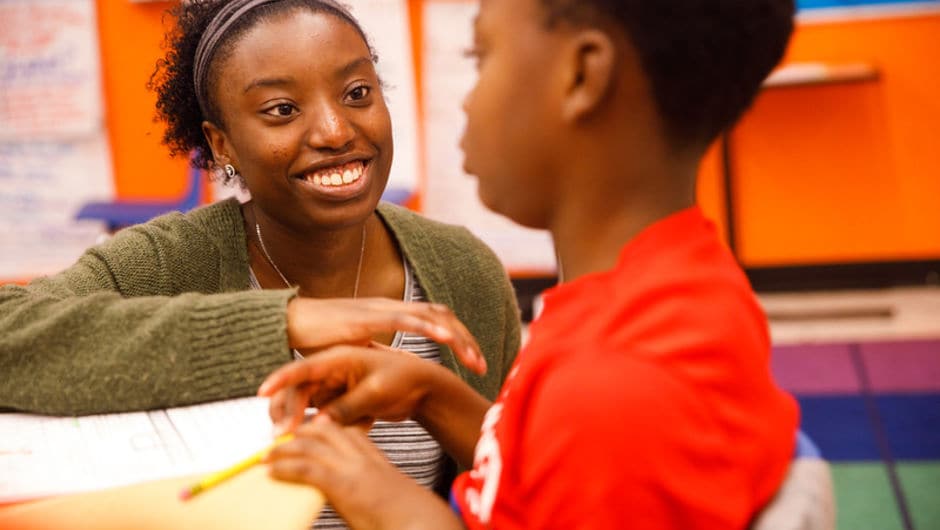 When it comes to deciding where to teach, don’t overlook the smallest state: Rhode Island. Teach For America Rhode Island launched nearly a decade ago, and since then, corps members and alumni have worked together—in partnership with local schools, universities, businesses, and other organizations—to create opportunities for children and pursue educational equity. As a corps member in Rhode Island, you’ll teach in schools in Providence, Pawtucket, and Central Falls.

With record-high teacher vacancies, accompanied by systemic issues in its schools, Rhode Island faces big challenges. Within the highest levels of the state’s government, though, there’s a new enthusiasm for digging in and engaging with these issues. The need within the state is great—but so too are the possibilities.

Take a look at some big reasons to choose Rhode Island when listing your regional preferences during your Teach For America admissions process. .

1. You’ll Be Going Where You’re Needed Most

Providence Public Schools opened the 2019-2020 school year with 82 teaching vacancies. That means roughly 2,000 of the state’s students do not have dedicated, full-time teachers. (Vacancies in STEM fields are particularly high.)

The teacher shortages is not the only pressing issue facing schools within Rhode Island. The academic disparity between white and Latinx children is the largest in the country. And while in many schools, the majority of students are people of color, teachers tend to be white—that means that students often don’t encounter classroom leaders with a background that mirrors their own.

Already, Teach For America is making a difference. In the Providence Public School District, there are 20 TFA corps members teaching STEM topics. And half of this year’s corps members identify as people of color. But there is, of course, far more that can be accomplished.

Throughout the state’s government, Teach For America is seen as a valued, essential partner. The challenge of unfilled teaching spots is a concern among the top  leaders of the state’s government—along with systemic concerns about education that have led to a state takeover of schools in Providence. The Providence Journal reports that Governor Gina Raimondo recently said, “We’re asking Teach For America to get more involved.”

3. Rhode Island Is Rich in Charm and Culture

Yes, Rhode is full of delightful beaches and waterside views, but living in the state also means taking advantage of easy access to both New York City and Boston, as well as living in (or near) Providence, a bustling, affordable, walkable city.  Rhode Island is rich in culture—a day can begin with drag brunch, continue with time spent by the water, and end with an art event sponsored by the Rhode Island School of Design (RISD).

Plus, there’s something special about being a corps member in Rhode Island. Collaboration is a guiding light among corps members, who feel connected with one another—you’ll often find them in each other’s weddings—as well as the community. As part of this tight-knit cohort, you can bank on the region’s executive director knowing your name. You’ll receive support from staff for the work you’re doing today, as well as what you’ll take on in the future.

RHode Island has a rich Guatemalan and Domincan population, as well as many people of Portguese and Armenian ancestry. Pawtucket is the second-largest community of Cape Verdeans within the United States, as well as home to a large number of residents from Liberia, according to the Providence Journal. The history and immigration patterns in Rhode Island make for a great deal of diversity, especially in urban centers. As a corps member in Rhode Island, you may be able to find places of worship, a wide array of foods from cultures around the world, and people you feel an affinity with.

There are 257 Teach For America Rhode Island alumni. Even after they finish their two-year commitment, these alumni stick around, teaching, leading affinity groups, and serving on boards. The general treasurer, the senior deputy chief of staff of the governor, the commissioner of education and her chief of staff are all TFA alumni. As a corps member, you’ll benefit from this strong alumni community. Teach For America’s commitment to educational equity can be seen at all levels of schools and government.

6. Take Advantage of a Wide Range of Regional Partners

A perk of teaching in Rhode Island is the ample graduate programs available. If you’re interested in policy, you can attend the Brown Urban Education Policy program (at a discounted tuition), to name just one. The region also partners with Rhode Island College, and deliberately makes it easy to individualize your masters, focusing on the areas that interests you most. Partnerships are also in place for corps members interested in school leadership or special education.

At the end of your time in the corps, you’ll have been a leader in the classroom—and possess an impressive resume, whether you remain a teacher or move on to other impactful work.