Students taught by teachers who share their identities and look like them benefit both academically and emotionally. 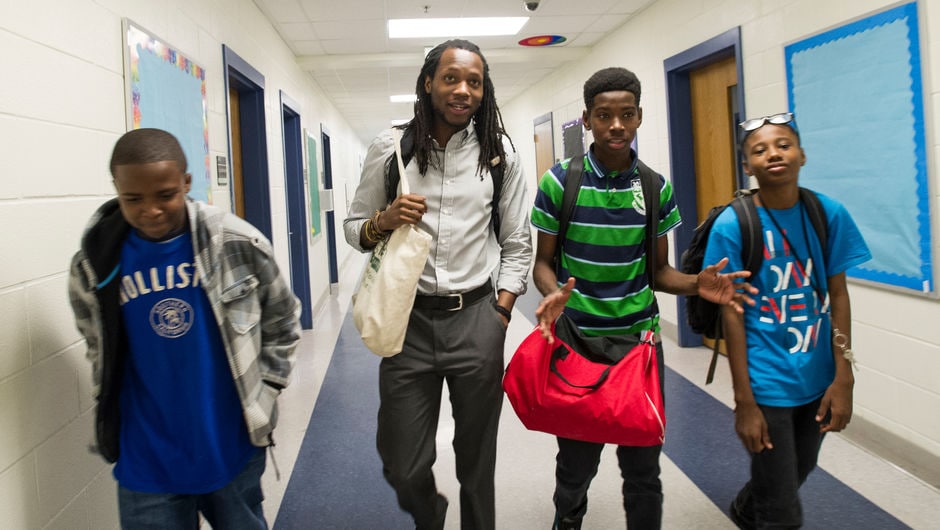 Growing up, Christina Torres (Los Angeles ’09) didn’t have a single teacher who looked like her.

“I grew up in a very white space, there wasn’t anyone who looked like me at all,” Christina says. “I was one of very few Latinx people in the area, let alone in the gifted and talented program I was in at school.”

Brandy Williamson’s experience during her K-12 years could hardly have been more different from Christina’s. Brandy (Miami-Dade ’18) grew up in Harlem, a predominantly Black community of New York City, where she attended schools with teachers of color from kindergarten through 12th grade.

“Having that experience, I didn’t think much of it until I graduated high school and went to college at a predominantly white school,” Brandy explains. “I just thought it was normal to have teachers who you could relate to on multiple levels, like class and race.”

Today, Christina and Brandy are teachers of color who primarily teach students of color. Both chose to enter the classroom because they knew firsthand the enormous impact having—or not having—a teacher who shared their identity had on them as children.

Studies show that students do, indeed, benefit from teachers who look like them. Black students who have even one black teacher by third grade are 13 percent more likely to enroll in college, according to research from Johns Hopkins University and American University. These same researchers also found that the positive “role model effect” of having a teacher who looks like you was especially beneficial for low-income young Black men, who are 39 percent less likely to dropout of high school if they had at least one black teacher in elementary school. Other research has found that students also benefit from attending schools led by principals of color.

At the same time, however, although nearly eight in 10 public school students identifies as a person of color, only about one in five teachers do so, according to recent national data on the demographic breakdown of teachers and students. (At Teach For America, 49 percent of 2018 Teach For America corps members identify as persons of color.)

The Power of Having Teachers Who Share Your Identity

The benefits extend beyond having role models and school leaders who share students’ identities, important as those are. For Brandy, it impacted the books she read, the lessons she learned, and the projects she worked on, as her teachers incorporated their shared identity into various aspects of their curricula.

“In social studies classes, our teachers talked to us about parts of our historical past, like slavery. We also looked back on Black historical figures, learned about different countries in Africa, and in high school, we talked a lot about African civilization,” Brandy says. “The first book that my high school social studies teacher gave us was a book called The Destruction of Black Civilization. It was way past our heads, and we didn't even know what we were getting into, but that book was really, really deep.”

“I didn't realize the impact my social studies teacher had on my life until I graduated,” she adds.

As she got closer to graduating from high school and attending college, Brandy’s teachers also connected with her about what it means to be a Black woman in society, and what to expect once she left for college.

“They really showed me the ropes and told me what it was going to be like in the real world. They talked to me about the stereotypes that might be associated with me based on my identity,” she says. “I realize now that my teachers were trying to teach us what to expect in the real world, because we were almost in a bubble: Everyone at my school looked alike, and everyone was mostly in the same class bracket. So our teachers talked a lot about college, and how it could be a culture shock for us.” 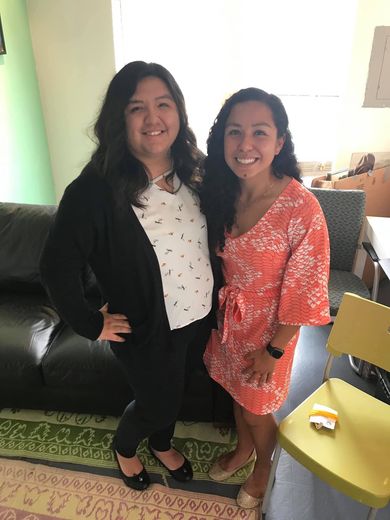 Another Level of Connection in the Classroom

Being without a teacher of color growing up didn’t just deprive Christina of role models to look up to. It also put the onus on her, alone, to stand up against harmful jokes and stereotypes she heard from her peers about the Latinx community. And that was hard for her.

“It would have been nice if I had a teacher to go to where I felt like, ‘Yes, someone sees me as who I am and maybe in some way sees themselves in me too,’” she adds.

When she joined the Teach For America corps and began teaching at a Los Angeles school with a majority of Latinx-identified students, Christina was determined to be the kind of teacher for her students that she never had growing up—one who would address societal expectations about what people of color are expected to be.

“A big discussion I had with my past students a lot is, ‘Why do you talk white?’ It's the thing I heard most from them, because I grew up around mostly white people and that's how I sound,” Christina says. “For other teachers, including myself, there was this assumption that because I’m brown, and they’re brown, that we would be the same and we would have the same experiences.” Her students quickly showed her that wasn’t the case.

In connecting with her students about their shared Latinx identity and community, Christina was able to open their world about what it means to be a person of color, as well as learn more about her own background from her students. Their relationship became stronger for it.

“As for me, it felt powerful to tell my students, ‘I don’t fully understand my Latinx identity right now. Can you help me?’ My students helped me learn Spanish better, and brought me mariscos for me to eat,” she adds. “They talked with me about the aspects of Latinx culture that I didn't have growing up.”

“What my students have told me is that just having someone that looked like them as a teacher sent them the message of, ‘You can be successful. You can push yourself. You can actually move beyond the single story that people have put on you.’”

A Unique Opportunity to Undo Damage

It’s important not to underestimate what it means for students to have a cultural affinity space in their schools, says Christina. For many students, a classroom led by a teacher of color can be a place to heal.

“I think some people misinterpret that and think ‘Are you saying that I don’t love my kids the same because I’m a white teacher?’ But no one is saying that.” Christina explains. “The point is that when a kid has a teacher of color, there are unique opportunities to undo some of the systemic inequity and beliefs about people of color that have infiltrated our system.”

“What my students have told me is that just having someone that looked like them as a teacher sent them the message of, ‘You can be successful. You can push yourself. You can actually move beyond the single story that people have put on you,’” Christina says. 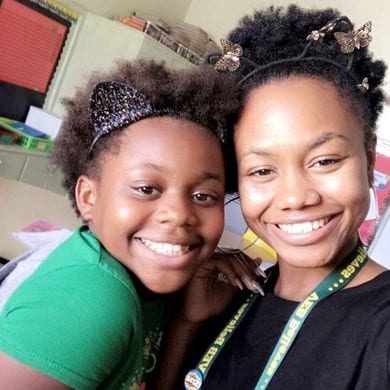 Brandy Williamson with one of her students.

A Role Model in Many Ways

Brandy now knows firsthand what it feels like to have young students looking up to her as a role model, watching all of the things she does in the classroom—both big and small.

“Once, when I took out my braids and I wore my hair out, all my students said, ‘Oh, my God. Ms. Williams. What are you doing?’ I told them, ‘This is my natural hair. I have my 'fro out today,’ and they were so surprised, saying ‘Oh, wow. You look so different.’ Then, the next day, two or three of my students came to class with their hair in a 'fro too.”

“So, I definitely see that my students follow me,” Brandy adds. “They’re looking up to me.”

Christina also discovered just how much her students were looking up to her when she ran into a former student of hers at Teach For America’s Latinx Corps Member Summit in San Antonio earlier this year.

“All of a sudden I heard, ‘Ms. Torres, is that you?’ I turn and I see this woman and I just look at her face and I'm like, ‘Oh my god, I know you.’ I hadn't seen her in eight or nine years maybe, but there was my student Ariana Rodriguez,” Christina says. “I ran over, gave her a hug, and she told me ‘I'm in my second year in the Las Vegas Valley.’ I think I might have immediately burst into tears.”

“To realize that Ariana had become a teacher through Teach for America and had made it through second year, just gave me this overwhelming feeling of pride.”

Writing Children’s Books With Students at the Center