The Strength of the TFA Network for Military Veteran Alumni

From emotional support to professional mentorship, four military veterans alumni share how the TFA Network continues to shape their career and life trajectories years after the corps. 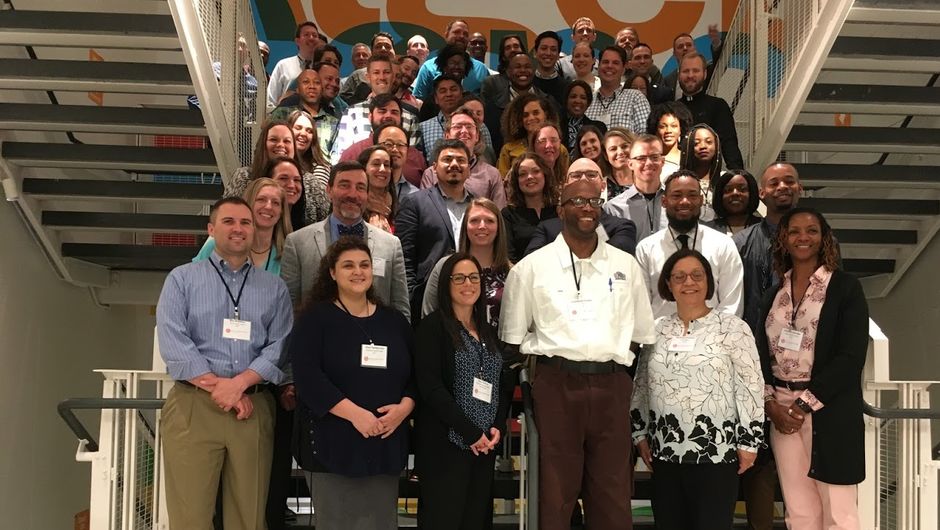 “Coming from the military, it can be difficult to find a career that provides a continuation of service. I think a lot of military vets have a hard time finding that,” Brett Chappell, a 2012 Phoenix corps member, says. But in recent years, a growing number of military veterans are looking to the classroom, and to Teach For America, as the place to continue serving their country.

We spoke with Brett and three other Military Veterans Initiative members to learn about their experiences with the TFA network. Each of these men are connected by their shared military and classroom service, their continued commitment to leading lives of impact, and the bonds of friendship and mentorship developed in the corps and and beyond. 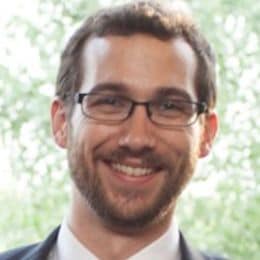 Before his time in the corps, Ryan Pavel (Detroit ‘12) was enlisted in the U.S. Marine Corps between 2005 and 2010, where he was deployed twice to Iraq to work as an Arabic Cryptologic Linguist. After his military service, while he was a senior at University of Michigan, Ryan learned about TFA. “The mission of TFA immediately appealed to me. It was clear that there is an enormous achievement gap in our country and that TFA was helping to close that gap,” Ryan says. “It seemed like an excellent way to continue public service.”

During his time in the corps, Ryan met Dr. Sid Ellington, the former director of Teach For America's Military Veterans Initiative. This meeting laid the groundwork for a much deeper professional connection years later at the Warrior-Scholar Project (WSP)--an organization that empowers student veterans to achieve success in higher education--where the two would work together once again in the service of education.

After learning about WSP from a friend and fellow military veteran with whom he deployed, Ryan helped launch a branch of WSP at University of Michigan. Today, Ryan is the Chief Operations Officer of WSP, where he continues to help enlisted military veterans make a successful transition from the battlefield to the classroom, as he once did himself.

Dr. Ellington also was a guiding force for Brett Chappell’s career. Brett enlisted in the Navy after the United States invaded Iraq, and was stationed at SEAL Team 8 in Little Creek, Virginia. After the military, he went back to school at Arizona State to finish his degree and find another fulfilling, service-oriented career. Brett was introduced to Teach For America, which he said is his “bridge back into an opportunity to serve.”

After the corps, Brett got an email from Dr. Ellington, inviting him to join TFA staff in New York to help recruit military veterans to the corps. This opportunity was the start of Brett’s career merging talent management with education, and a chance meeting with another military veteran alum, Charles Way Stewart, would eventually help his big career break. 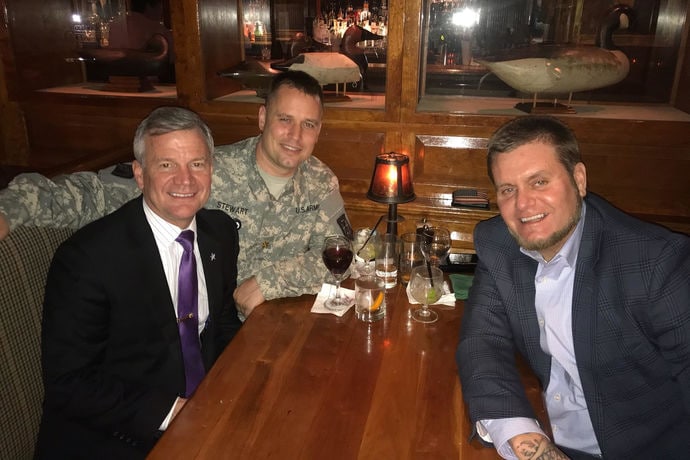 Dr. Ellington, Charles, and Brett in D.C., where they enjoyed dinner together and talked about life, TFA, and being MILVETS.

Charles and Brett met during a military veterans’ breakfast at Teach For America’s 25th Anniversary, and would continue to meet monthly for lunch in New York City to bond over their shared experiences and help support each others’ professional development. Charles supported and advised Brett through the process of interviewing for jobs in the private and nonprofit sectors. He was also a mentor and reference for Brett as he applied and interviewed with the nonprofit Seton Education Partner. Today, Brett is the organization’s chief talent officer.

“Going from a teacher to being in New York City and overseeing the entire talent of Seton Education Partners… it’s been pretty awesome and definitely nothing that I ever would’ve expected,” Brett says. And as for his relationship with his mentors: “I still talk to Sid and Charles on a consistent basis via email.”

“We push each other to use and apply the experiences we've had in the classroom and in the military towards how we develop as leaders.”

Charles Way Stewart (Dallas-Fort Worth ‘10) is a major in the United States Army Reserve and currently serves in the 426 Civil Affairs Battalion (Airborne). He became an army officer in 2006 and has served in Iraq, Kuwait, and Qatar as well as in the U.S.

Charles was introduced to Teach for America during his undergraduate years through campus recruiting and relationships with corps members in New Mexico. “I was just really inspired by the leadership qualities and the civic-mindedness of the people I met,” Charles explains. So, when he transitioned from active to reserve duty in 2010, he decided his next commitment would be with Teach For America. Charles taught second grade in Dallas during his core placement, and went on to teach two more years with KIPP Charter Network before pursuing business school and a number of prestigious fellowships. At one of those, at the Bill and Melinda Gates Foundation, Charles directly supported TFA founder Wendy Kopp and the development of a partnership between the Gates Foundation and Teach for All.

Charles’ participation in these fellowships and business school was, in part, thanks to the mentorship and encouragement he received from other military veteran alumni. “After the corps, I didn't know about business schools or fellowships. It took somebody to say, ‘Charles, you'd be really competitive for this. Have you thought about this?’ for me to pursue those opportunities,” Charles explains. Today, Charles works as a machine learning project manager at human capital management software company Workday, and continues to support his military veteran peers in their professional and personal endeavors.

“A lot of what I do now when I'm supporting my fellow MILVETs is trying to pay forward some of that support I got,” says Charles. “We push each other to use and apply the experiences we've had in the classroom and in the military towards how we develop as leaders.” 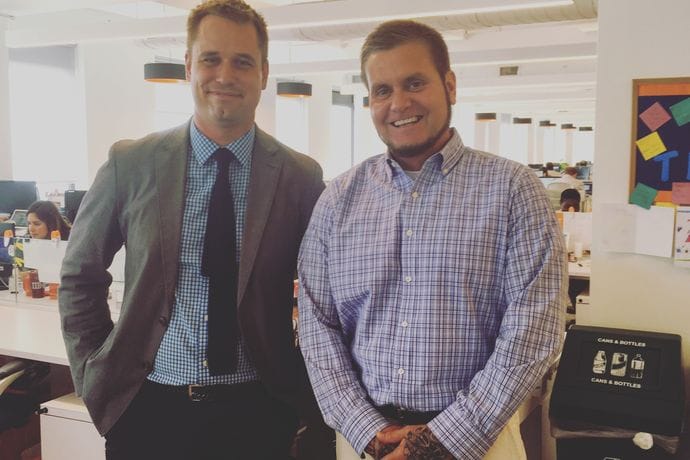 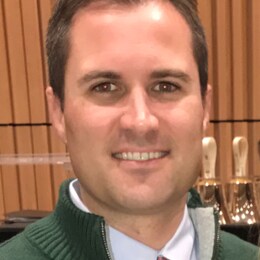 Ben Maddox’s (Rio Grande Valley ‘07) path to Teach For America and military service is a little different than that of his peers: he joined the military after he served with Teach For America. Ben attributes this experience as a ninth grade special education teacher in the Rio Grande Valley as the foundation for a lifelong career in public service.

After the corps, Ben attended law school at the University of Texas, where he became involved in education-focused political action. He founded Austin Kids First with a group of TFA alumni to support and elect candidates for the Austin Independent School District school board. The call to serve led Ben to commission as a naval officer in 2014 and join the Judge Advocate General’s Corps (JAG). The Navy JAG Corps provides military justice, operational law and command advice, and legal assistance to the Navy and its service members.

Ben became involved in the TFA Military Veterans Initiative in 2018 and attended the first TFA MILVET Summit that year. “I’m so glad I did because I met many other service members and veterans who were in the military prior to joining TFA or who joined the military after their TFA commitment,” Ben says. One of those alums was Charles, who encouraged him to utilize his role in military justice and as a Navy JAG to push for equity by applying for the Presidential Leadership Scholar (PLS) program.

Ben’s leadership project in PLS seeks to build consensus around the need for military decision-makers to undergo unconscious-bias training in response to the racial disparities that persist in the U.S. military justice system. “TFA directly showed me systemic inequity, and I am now doing my part to combat the issue within the realm of military justice, just as I did in the classroom 12 years ago,” Ben says.