TFA alum takes her duties above and beyond

For a sterling example of how a Teach for America Idaho alumna can have an outsized impact on her community, you need look no farther than to Jayna Loy. 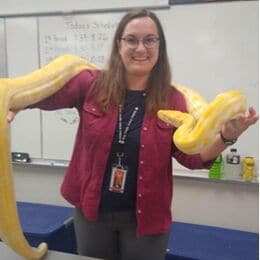 In her four years at Nampa’s West Middle School, Jayna Loy has been not only a highly effective seventh-grade science teacher. She has helped launch a comprehensive after-school program, coached volleyball, and started a volleyball clinic at the school as well.

Originally from Southern California, Jayna attended Northland College in northern Wisconsin, where she studied environmental geosciences with a focus on geology and water science. “I always intended to teach, but my mom is an engineer and she said to me if you want to teach science, don’t major in education, major in science.”

That turned out to be good advice, Jayna said, though it took her a few years after college to find TFA and start her teaching career. Upon graduating, Jayna and her fiance moved first to Austin, Texas, where she worked with Americorps on an after-school 4-H program.

After a year, she moved to Vancouver, Washington, where she again worked with Americorps, on river restoration projects for the local utility company. Some of her work consisted of taking high school and young adult conservation corps groups out to do planting and restoration work, which further reinforced her desire to get into teaching.

She landed a job in Vancouver as a before- and after-school program site manager at a local elementary school, and while working that job she applied for TFA. She was accepted and initially assigned to Mississippi, but deferred for a year to attend to some family business.

When she started her corps service in 2018, she switched her focus to Idaho, her top choice, and landed in Nampa. In her first year at West Middle School, she helped launch a federally funded 21st Century Community Learning Centers program, focused on the STEM (science, technology, engineering,and math) fields.

The program consists of physical activities, STEM activities,healthy snacks, and occasional field trips for the middle-schoolers. It lasts from the end of school at 2:45 p.m. until 5:30 p.m., four days a week. Three teachers staff the program, so Jayna typically spends three days a week pitching in.

“This program has turned into one of the parts about teaching at my school that has kept me really excited,” Jayna said. “These STEM kids, a little nerdy, excited to do fun activities and games, at the end of a hard day, they rejuvenate me.”

The after-school STEM activities Jayna helped start include a healthy eating and nutrition program in partnership with the University of Idaho, which includes a sizable garden students are responsible for tending. The program partnered with a church adjacent to the school, which also has a large community garden.

“We went back and forth, with people at the church helping with our garden, and our after school kids helping with their garden.”

The program also partnered with NASA last year in an engineering challenge, during which students had to build a “contraption, a model of a rocket ship to get to Mars. We got to do a Zoom call with people that worked in NASA, share our  projects and ask them questions about space travel.”

As if the after-school program wasn’t enough of an extracurricular commitment, Jayna has also coached seventh-grade volleyball. Many West students have never been exposed to the sport, so coaching involves teaching basic rules and techniques and recruiting at times reluctant students as well as usual coaching duties. Jayna recently received a $2,000 grant through TFA to conduct a volleyball clinic later this spring for the many West students who have never been exposed to the sport.

You might think that Jayna would have wanted to rest and recuperate over the summer, given how full her plate is at West. Instead, she worked last year at a summer school program for second-and third-graders through the Wood River YMCA in the Sun Valley area.

The program was an intensive academic intervention for students struggling with reading and math. “They put this really great spin on it so it felt like summer camp. The first half of the day was math, recess, then reading. But the afternoon was science enrichment and arts. And Fridays were daylong field trips.”

Jayna said she enjoyed working with younger students in Wood River, and being in a beautiful and bucolic setting. “It was a very busy summer, but it was a great experience, and quite an adventure in teaching,” she said.

And did she allow herself a break between the end of the summer program and the resumption of her duties at West Middle School? No.

“I came back from that and went straight to a full week of field trips with my middle school after school program,” Jayna said. “But that's OK. I loved that too.”