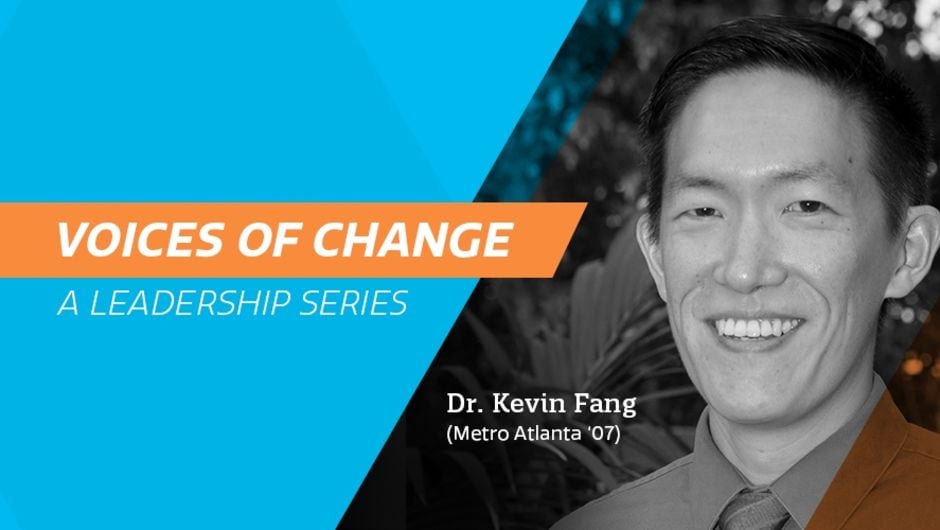 From career educators and physicians to civil rights attorneys and entrepreneurs—Teach For America is a bold and diverse network made up of leaders from all walks and sectors. Voices of Change: A Leadership Series highlights some of the corps members and alumni who are tackling the systemic problems of inequity and partnering with others to make meaningful progress for kids and communities.

When Dr. Kevin Fang (Metro Atlanta ’07) postponed medical school to teach ninth-grade biology in Atlanta, he didn’t expect his choice would drive him to become the change agent he is today.

Commitment to the Community

Fang works with the most vulnerable residents in the city of Los Angeles. As a fellow and the only LA-based pediatrician in Kaiser Permanente's highly regarded Community Medicine Fellowship Program, Fang divides his time between seeing patients at various federal and community clinics throughout Southern California and teaching in Kaiser's residency program.

“I take pediatricians-in-training to shelters, foster care programs, dental clinics—you name it,” says Fang. “Many of whom have never worked in clinics outside the Kaiser Permanente system nor had done much community health work. It's an eye-opening experience to say the least.”

Fang grew up in the affluent suburbs of Rockville, Maryland, or as he likes to call it, “the upper-class bubble,” where he noticed early on the disparities separating students enrolled in his magnet program from others at the public high school.

While studying biology and psychology at Duke University, Fang served as president of the Asian Students Association. His interest in social justice, however, grew through joining Center for Race Relations and books like Tracy Kidder’s Mountains Beyond Mountains—which chronicles the work of physician and anthropologist, Paul Farmer.

More Than Just a Teacher in Atlanta

Teaching ninth grade biology at a predominantly black high school in a low-income community in Atlanta was a “crash course” in the many opportunity barriers and challenges faced by those in underserved communities.

“At twenty-one, I saw myself as more than just a teacher, but a role model, brother, friend, and part-time parent,” he says. Fang also witnessed firsthand that his students were unable to access basic health care needs.

“It wasn’t about the lack of financial capital—it was a lack [of] social capital, and I wanted to [help] change that,” says Fang.

The Horizons Program at Case Western

After his two years in the corps, Fang enrolled at Case Western Reserve University School of Medicine in Cleveland, Ohio.

His experience as a corps member in Atlanta had given him a growing sense of purpose and urgency. “I wanted to create a pipeline through mentorship and expand health care literacy,” Fang explains.

Today, Horizons continues to thrive and prepare future leaders for careers in the health care profession. 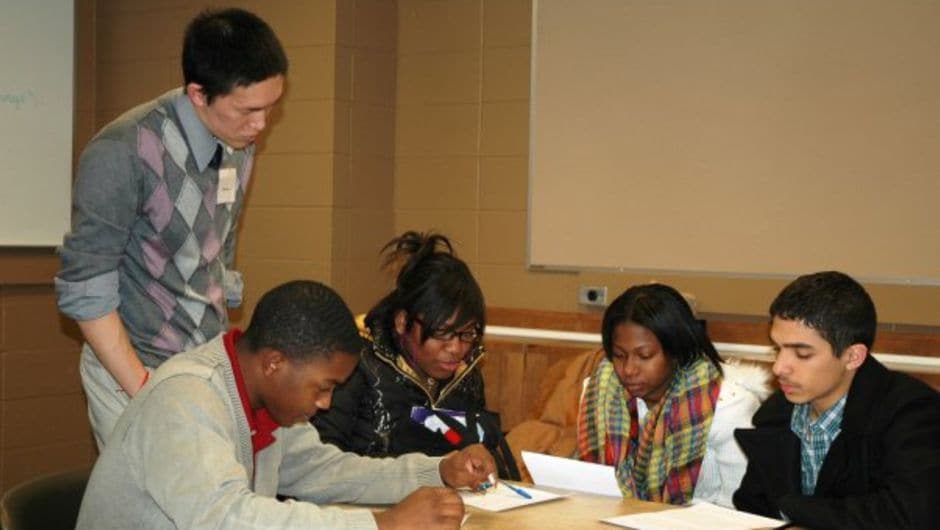 Fang, working with local high school students participating in the Horizons Program, which prepares future leaders for careers in the healthcare profession.

Fang came to Hollywood High School as an intern during his three-year pediatric residency at Children’s Hospital Los Angeles with the goal to study and improve student awareness of the brand-new wellness center on campus.

“Students had an important health and wellness tool at their fingertips, but one-third of students didn't know it existed and about half didn't know where it was located,” says Fang.

Fang went to work, applying his classroom experience to create curricula to help improve student health. In September 2016, Fang returned to the school with a group of clinicians. Together, they taught over 20 physical education classes.

At the Corner of Health and Opportunity

Fang still stays connected with his former principal and students from Atlanta. He recalls picking up the phone one night to an upset mother of a former student, who had ended up in “juvy” for assault.

“I got on the phone with him. We talked about what happened. About the wrong crowd he’d gotten in with and ways he could move past this. After I had visited him on house arrest, I contacted everyone at his school to make sure they’d look out for him when got back. And even though he lost his entire tenth-grade year, he caught up! Now, he’s about to graduate as a biology major—he recently presented his research on high copper contamination affecting southern toads, and I couldn’t be prouder!”

Fang is back at Hollywood High School as a fellow and a physician in the wellness center—the intersection of health care and education—where Fang will never stop working to build healthier communities and open doors of opportunity that can help put a student from Atlanta on the path to a meaningful STEM career.

"My students’ stories and my corps experience have shaped my career as a pediatrician," says Fang. "Even though I'm not in the classroom, I want to be doing my part as a doctor to help the teachers who still are."