2016 Indianapolis alumna and manager of corps member development, Emily Hancock, shares stories of how TFA members and students are encouraged by, and driving towards, meaningful progress in Indianapolis.

When I joined TFA Indianapolis, I was placed at an all-boys middle school. I was excited to be back on the east side where I grew up, but also a little nervous. As a white woman, I was apprehensive about teaching in a classroom of primarily male students of color because I wasn’t sure how we could connect given our different identities. I thought being from the same side of town could help make that easier. 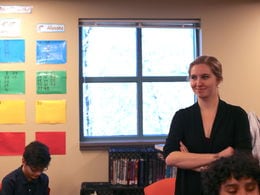 Emily in her second year of teaching

However, I quickly realized that the east side I knew was not at all like the lives of my students at 38th and Sherman. Yes, I could talk with them about the O’Charley’s on Washington Street and see them at the movies at Washington Square, but some students came from a home vastly different from mine. I had sixth grade students whose power at home was turned off preventing them from doing their homework, and I heard about many other things I never even thought to worry about when I was a kid. I spent much of my first year grappling with these differences as I worked to understand my students and their context, all while trying to be an effective Humanities teacher.

I had the privilege of being taught by some truly amazing educators as I grew up. I remember walking down the halls of Warren Central High School as a student thinking that no matter who you are, some teacher made an impact on you. I remember thinking what immense power that held, and how cool it would be to make that same impact. All this led me to TFA.

Halfway through my senior year of college, I applied thinking that this was my chance to get out of Indiana. I loved my home but thought there was more to be seen and done in other places. I explained to a TFA consultant what I was looking for in a region: big city with a small-town feel, different neighborhoods to explore, and probably somewhere close to the Midwest. To my surprise, she told me that my best fit was likely Indianapolis.

That conversation was three and a half years ago. Through my work as both a corps member and now a coach with TFA I have learned so much more about the city where I grew up that I never would have known before. I see first hand the people putting in work to make our community better. 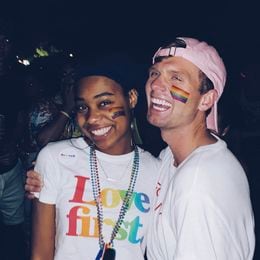 Marshall with friend at Pride

One of the ways Indianapolis is working to be more welcoming is with the LGBTQ+ community. Marshall Metcalf is a 2018 Indy corps member and second grade teacher from Kentucky who identifies as a member of the LGBTQ+ community. When he found out he was placed in Indy, he was apprehensive about finding community. However, when he got here, he was surprised by the popularity of pride in Indianapolis and found a community inside and outside of his school that was accepting of his identity and open to having dialogue.

“Now I'm happy I came because I've made some of my best gay friends that I know will continue to be my friends forever,” Marshall said. “I didn't expect that, and I didn’t expect my gay friends to be so diverse. Not all of them are white.”

Many corps members appreciate how cost effective the city is. It’s easy to live downtown, have fun on the weekends, and not spend a ton of money. Ana Acosta, a 2019 corps member and Kindergarten teacher from New York who identifies as Afro-Latina, had dreams of owning a car, having her own room, and working as a teacher.

Another benefit of being cost effective is that it allows corps members to experience new things at reasonable prices. Manasi Arya, a 2019 corps member and Special Education teacher who identifies as Indian-American, tries a new place every week, including bubble tea cafes, coffee shops, and vegetarian friendly restaurants. 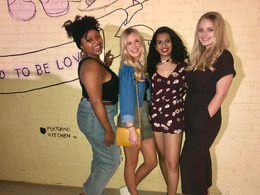 “I really appreciate the diverse restaurants,” Manasi said. “I feel like you can look up 'Vietnamese restaurant' and they’ll probably have something like that. That’s really, really cool for a small city.”

For having a metro-area of roughly one million people, Indianapolis has a unique small-town feel. I can hardly go anywhere without seeing someone I know and having a conversation with them. There are so many communities to plug into across the city that it is easy to find a home here.

“It's a very homey environment,” Manasi said. “It's kind of like the best of both worlds in the sense that it's like a city but it’s small and cheap.”

“All of those things that I always wanted in New York, but I couldn’t have because we didn’t have money - all of those things became a reality now that I'm in Indianapolis. I have really appreciated all the growth that I've done just from moving here.” 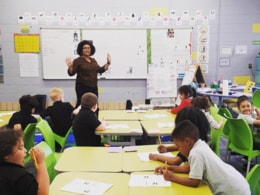 Ana teaching in her classroom

Ana lives with her sister on the south side and finds community on the west side of Indianapolis, where there are many Spanish-speaking people and businesses. Saraga is an international grocery store that stocks food from countries around the world, including foods from her home country of the Dominican Republic.

“I found things there that I only eat in the Dominican Republic when I'm on the island because it is specifically sold there and it’s made by them,” Ana said. “So I was in shock to find all these products.”

Ana is also encouraged by the work she sees in her school in their work to employ and learn about diverse cultures: “I am very hopeful that we are going in the right direction towards making those changes and having people who are willing to have those uncomfortable conversations and realize, yes, we can do more for these children of color,” she said. 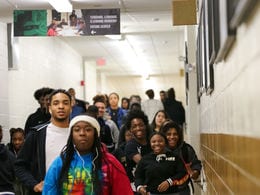 The students in Indianapolis are also dedicated to improving their city and their schools. As one example, at Crispus Attucks High School, a historically black and formerly medical magnet high school in downtown Indianapolis where TFA corps members teach, students are interested in working in various roles in healthcare. They also see the potholes and gun violence in their communities and want to make their city better. From being a pediatrician to a nurse to working in the labs at Eli Lilly, they imagine lives and careers that benefit themselves and their communities. Through pathway programs, their high school is working to prepare them for life after graduation.

“When I came to Attucks it opened up my eyes to what I actually need to do,” one student said about the special health science classes her school offered.

Indianapolis still has a lot of work to do to become more equitable, but I also know that there are so many like me, the corps members I support, and their students who are dedicated to making that change happen. From education to healthcare to the rising tech industry, this is a city that is trying to be, and becoming, better.