Jennifer Anaya (LA, ‘13) - On Finding "Home" at Her Placement School

Jennifer Anaya joined the corps in 2013 at Valor Academy High School in North Hills. Eight years later, she still calls the school “home” as the Vice Principal of Instruction. Read about her journey and love of teaching below. 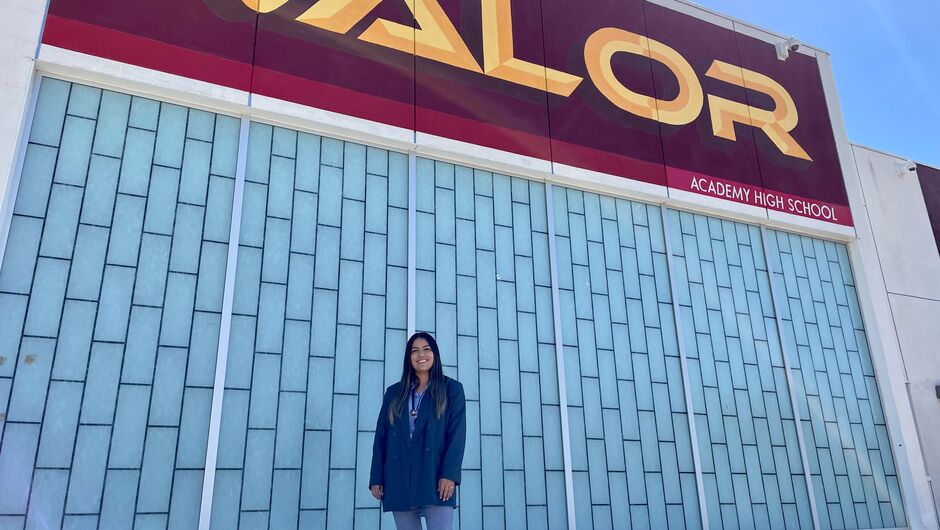 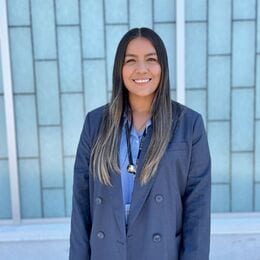 Jennifer Anaya spends anywhere from 6 - 15 hours a week commuting from her home in Southeast Los Angeles to Valor Academy High School in North Hills where she is the Assistant Principal of Instruction. It may seem unbearable to some, but it's a commute she's been doing every school day for almost a decade when she started at Valor as a founding history teacher and Teach For America Los Angeles (TFA LA) corps member in 2013. "People think I'm nuts," she says through laughter, "but I really care about this community. It's very similar but also very different from the community I grew up in."  Around 540 students currently attend Valor Academy High School–94% receive free and reduced lunch and 98% identify as students of color with the vast majority (92%) identifying as Latinx/e. Jennifer was raised in Bell Gardens in Southeast LA. “It’s a pretty small town, about 2 square miles and it’s like 98% Latinx/e and low-income,” she explains.

As a teenager, she went to the local public high school before attending UC Santa Barbara (UCSB). As a first-generation college student with no idea what to expect, UCSB was quite a shock. "I felt I wasn't prepared. I was afraid to speak up. I wanted to leave (during) my first year, or transfer," she recalls. That all changed when she joined Hermanas Unidas, a Latinx Affinity group on campus that made her feel “at home.” During her college years, she navigated different spaces on campus, shifting between feelings of belonging and empowerment to isolation and confusion. “College opened my eyes to the differences between going to high school in Bell Gardens versus going to high school in a more affluent community,” she shares. She noticed her classmates’ high school experiences (and their access to clubs, AP classes, extracurricular activities, and academic supports) were often tied to their socioeconomic status. It was something she had theoretically known before college, but it became a very real part of her everyday life at UCSB and something she desperately wanted to change. So, she joined TFA LA.

Arriving on campus as a first-year teacher at Valor Academy High School, she knew the path ahead was not going to be easy but felt she was exactly where she was supposed to be. Jennifer created the curriculum for her students almost entirely on her own as the founding history teacher for the then-brand-new campus. It was a "journey" but one that fostered her love of teaching and enabled her to develop and thrive alongside her students. Her influence was immediate and at the urging of Valor’s Principal, Dr. Evelyn Licea (a TFA alumna herself), Jennifer became the Department Head serving as a liaison among students, her fellow history teachers, and school administration. "I feel like she saw something in me and that motivated me to want to do more and have a larger impact," she reflects. This was just the start of Jennifer’s leadership journey. In the years that followed she became a Grade-level Lead and then Instructional Coach, and helped to mentor new teachers, determine curriculum, monitor and support teacher development, and respond to student performance or behavior concerns. Then, in 2019,  she entered her current role as the Assistant Principal of Instruction.

“When I started teaching and I was in my own classroom, I was like wow, I don't think I know everything that I need to know, but I felt really great about where I was placed.  I've been here for 9 years.”

As the Assistant Principal of Instruction, she now spends the majority of her days alongside teachers enabling them to reach their full potential as educators through coaching and feedback, curricula development, and relationship building. But, she never misses an opportunity to be with students and is frequently spotted hanging out with scholars during lunch. Classroom visits allow her to witness students’ “a-ha moments” as she calls them. "It's still one of my favorite things, seeing that light bulb turn on (for students).” Working with teachers, she loves when she is able to show them their brilliance and impact on students. "This year has been really hard," with the pandemic, staff shortages, and attendance, "but helping (teachers) figure out…that although there are challenges, they are doing a great job and there are good things to be proud of,” says Jennifer.  It's especially nice to make these connections with new teachers like the corps members regularly placed at Valor.  "It's great to have corps members at our school--they align with our values…they believe that all students can and want to learn."

Even though she's not in the classroom every day Jennifer is always thinking about how the school and its teachers can best serve students. Since taking on her role as Assistant Principal of Instruction, there has been an increase in the percentage of students passing the statewide English Language Arts/Literacy and Mathematics student performance assessments (CAASPP). Her drive, penchant for fun,  and empathetic leadership style makes her a favorite of staff and scholars alike. A recent graduate of Valor spoke of Jennifer's influence during her valedictorian speech. "She shared how having me as a teacher really motivated and encouraged her to want to aspire to be an educated Latina. That's always something that I keep close to my heart."