6 Reasons to Teach in Kansas City

Since 2008, Teach For America has locked arms and led with Kansas City year after year, thanks to our loyal community of partners and benefactors. 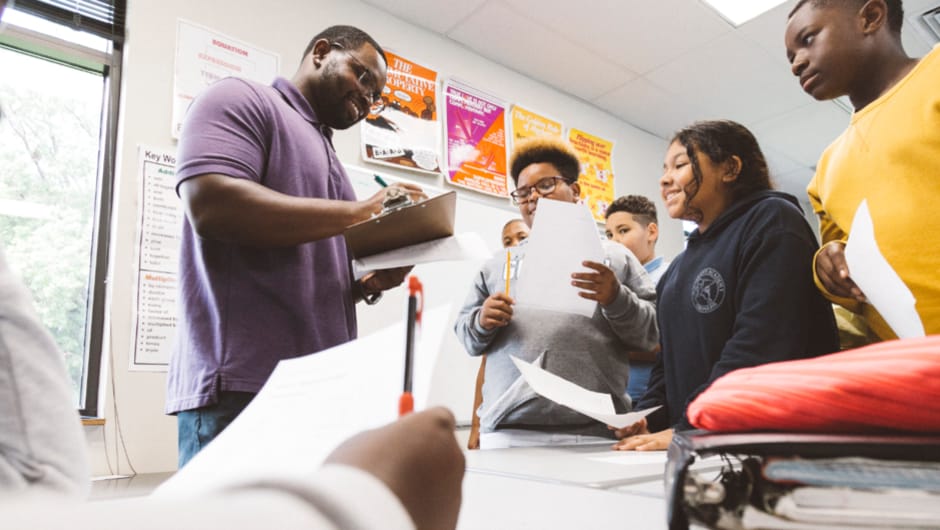 Ever since Teach For America established its presence in Kansas City more than 10 years ago, graduation rates, attendance, college readiness, and state test scores have risen steadily each year. This is a life-changing phenomenon for the district’s 30,000 students—and it wouldn’t have been possible without creative public school teachers who challenge the status quo.

At the same time, there’s much more to be done. By joining the corps in Kansas City, you’ll be at the forefront of a movement that is raising the bar for educational excellence in real time. Here are just a few of the many things that would come with choosing to teach in Kansas City public schools as a Teach For America corps member.

You’ll Join the TFAKCFAM, a Vibrant and Growing Educational Community

TFA has an established presence in Kansas City—a community we call the TFAKCFam—that has already made a lasting impact. Over the years, the city has welcomed more than 1,000 of our corps members, and they’ve led over 150,000 pre-K through 12th-grade students to academic success. Teach For America Kansas City consistently ranks among the highest performing regions across participant satisfaction and leadership development out of all TFA sites.

Thanks to the size of the Kansas City corps, we’re able to host and facilitate growth opportunities that help our corps members realize their dreams.

“Teach For America has benefited me in indescribable ways,” TFA Kansas City alum Rachel Foster says. “The organization has put many professional development opportunities in my path, such as the TFA Computer Science Fellowship. Because of TFA, I’m constantly learning and growing!”

Another special opportunity that you won’t find anywhere else is TFA Kansas City’s annual Shark Tank: Teacher Edition event. Like its namesake television show, at Shark Tank, corps members and alumni pitch their ideas to donors interested in funding education initiatives. The donations make it possible for teachers to benefit their students in the ways they believe are most vital, inside and outside of the classroom.

“My favorite memory from being in the corps would be participating in TFA KC’s Shark Tank: Teacher Edition,” Jessica Tolan, another KC alum, says. “This experience pushed me way out of my comfort zone to present a ‘music education in the ECE (early childhood education) classroom project. With the funding I received, I was able to give my students experiences they might never have had—seeing musicals, having all kinds of instruments in the classroom, etc. It’s an experience I will never forget.”

Your Passion Will Be Valued

“When I was a first-year CM, I taught 24 first graders the impact that littering has on our planet,” Rachel says. “We learned all about reducing, reusing, and recycling. By the end of the year, I had a classroom full of advocates of the planet who would picked up trash they saw and kept our school community clean. This lesson was not in a textbook, but it’s really critical to learn at an early age. I am so proud of them to this day!”

The People of KC Love Their City

Soon after you set foot in Kansas City, someone will tell you that its nickname is “the City of Fountains,” because only Rome is home to more fountains. But this pride in KC extends far beyond the region’s architecture and landmarks. It’s a spirit that permeates the city. Kansas City is home to professional football, soccer, and baseball teams, which brings the city together to bring strong culture and love for the Kansas City heart.

“Working in the KC region is special for a multitude of reasons, but the biggest one would have to be the pride that the people of KC have for the city,” Jessica says. “It is unreal how much people love this place.”

Diversity, equity, and inclusiveness are central to our work. To that end, Kansas City corps members have seized many opportunities to launch transformative initiatives for young people of all backgrounds. One example is Code the Block, founded by math and coding teacher David Persley. Code the Block is a one-of-a-kind program that makes it possible for Kansas City’s underserved students to become key stakeholders in the local tech landscape.

You’ll Grow as a Leader

The work we do at TFA is not easy, but it is important—and it changes us. It makes us into leaders. For example, one TFA KC alum joined the Missouri state legislature—a career path she says was enabled by her TFA experience.

“If I hadn’t joined Teach For America, I wouldn’t be a Missouri state senator,” State Sen. Lauren Arthur, a 2010 TFA KC alum, says.

There’s also a dedicated leadership development program in Kansas City called the Green Fellowship. Green Fellows are highly effective TFA alumni who are selected to move to Kansas City and teach for at least two years after their corps commitment. They receive professional development that helps them connect with local leaders, learn together, and work toward a capstone project that benefits their school and/or community.

“The Green Fellowship has given me a school leader mentor who is like a father,” says Von Smalley, a TFA KC Green Fellow and 2013 TFA Chicago alum, “and a network that is unmatched.”

In Kansas City and nationwide, there’s a common thread among TFA corps members: they go on to do great things. Among TFA’s 55,700 alumni are policymakers, CEOs, school leaders, lawyers, and community leaders. Today, thanks to our strong alumni community and many years of coordinated work, TFA Kansas City’s commitment to educational equity can be seen throughout the city’s schools and communities.