Building Classrooms Where Students Define Themselves as Heros

Shukri Elmi starts her first year teaching in her hometown community, where she hopes modeling authentic identity will foster student's own sense of heroism 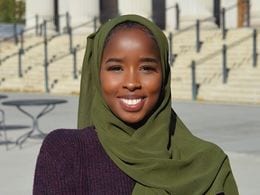 This September kicks off Shukri Elmi’s first year as a Teach For America Twin Cities corps member and though she admits she doesn’t have everything quite figured out yet, there is one thing she’s sure about.

“My classroom theme will be superheroes because I love Marvel movies. I want to teach my kids you can always be your own superhero,” Elmi said.

Elmi has always been her own sort of superhero, guided by a desire to be involved with her community and friends. During her time as a student at the University of Minnesota, she was vice president of the Al-madinah Board and on the Board of Governors while majoring in sociology and political science.

She heard of Teach For America the fall of her senior year and applied, though didn’t think too much into it. Her plan was already set -- attend graduate school at the Humphrey School of Public Affairs and maybe move to a bigger city for a change of scenery. Then her sociology and political science classes got her thinking deeply about the different influences and factors that led her to where she was, along with the opportunity she held.

“I had everything planned out for me because I had older siblings, but I never thought about people who don’t,” Elmi reflected.

Through conversations with her professors and a desire to understand the systems she hoped to influence, she decided graduate school could wait. Elmi was ultimately accepted into TFA and placed in her hometown region of the Twin Cities.

Being hired as a 2nd grade teacher at Higher Ground Academy was a full circle moment for Elmi, since she attended the school for half of kindergarten and first grade. Elmi’s parents immigrated to St. Paul, Minnesota in 1999 with her three older brothers and have lived there ever since. Higher Ground Academy was a staple of her childhood and community, where many leaders worked and where weekend Islamic school was held.

“When I was hired at Higher Ground, I knew I really wanted to work with parents. My parents didn’t speak English when I was younger and conferences were hard for them. That became a big deal, so they had to come on certain days. I didn’t feel comfortable with that,” Elmi said.

As a Higher Ground Academy teacher, Elmi joins an established TFA community. Higher Ground Academy has partnered with TFA Twin Cities since the region launched in 2010 and currently has 12 corps members. The school’s Executive Director, Dr. Yigsaw, was featured in TFA Twin Cities’ 10th Anniversary Celebration this past June and four alumni work at the school as part of a talent clustering model for corps member support and development.

As for the first few weeks of school, Elmni is focused most on bringing herself into the classroom, superheroes and all.

“I'm excited to bring who I am into my classroom and see how that evolves with my students. I want to be a reflection of them and talk about the stuff that goes on at home and relate it back to the classroom.”