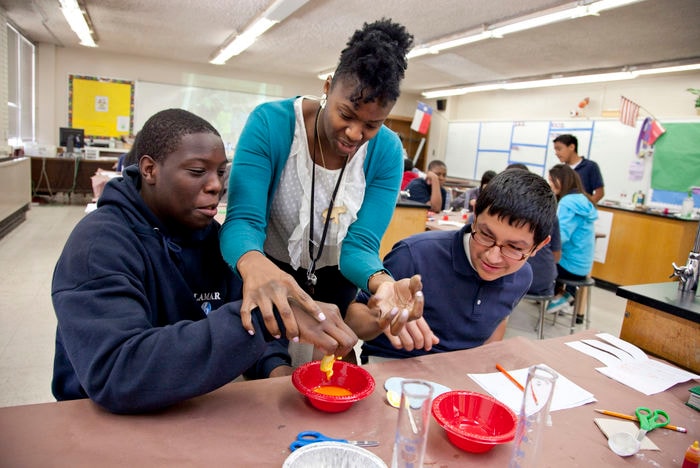 We've been in Houston since 1991, and our network is leading some of the most innovative education initiatives in the country.

For the last thirty years, Teach For America has been a pacesetter for education reform in the city of Houston. The same entrepreneurial spirit that made Houston the world's energy capital has propelled efforts in education and we've been a big part of it. Thousands of corps members have taught in Houston’s lowest-income schools, reaching nearly 200,000 students collectively and becoming some of the city's most prominent education leaders. Together we are building a coalition of teachers and community leaders that will continue to transform the educational landscape.

Houston has a storied history of innovation in education. Since 1991, Teach For America Houston—in partnership with school districts, families, and students—has been at the vanguard of innovation in improving educational outcomes for kids. Some alumni have played leadership roles in Houston Independent School District (HISD) as school board members, principals, and district leaders, while others have founded organizations designed to support lower-income families with college readiness, career pathways, community infrastructure, and more. The combined efforts of students, parents, corps members, alumni, and community leaders have resulted in elevating conversations around school choice that have impacted programs and policy not only in Houston, but across the nation.

Houston has a storied history of innovation in education. During the 1990s, KIPP and YES Prep charter school networks were founded here by Houston alumni and corps members began working in their classrooms soon after. Both KIPP and YES Prep have alumni working across campuses at all levels. Our partnership with Houston ISD, the seventh-largest school district in the nation, began in 1991 and our relationship continues to expand as our alumni and corps members work with the district on its goal of creating a college-bound culture in its schools.In 2009, Teach For America Houston began working with BakerRipley, first at their Headstart campuses and later at alumni-led Promise Community Schools. BakerRipley provides wraparound services, including financial support and job and career development in order to support the whole student and their community. Teach For America Houston began its partnership with Aldine ISD, one of the largest districts in Texas, in 2019. The same year, Aldine ISD moved from a C-rated to a B-rated district with the Texas Education Agency and TFA corps members and alumni continue to work across the district in partnership with its goal that all students will receive an unparalleled education that grants them access to choices in their future.

Today, corps members are a part of the fabric of this city. They find themselves in the company of like-minded educational leaders who share a passion for making things better for all kids. The city is currently home to over 1,700 Teach For America alumni, many of whom are still in the field of education—teaching, serving as principals, administrators, or school and district leaders. These school and district leaders—along with a cadre of alumni in other sectors and several non-profit organizations targeting educational inequity—are pushing Houston to live out its promise to transform outcomes for underserved students.

For nearly three decades, Teach For America has worked alongside communities in Houston to prepare students for college and career opportunities. Today, a network of 1,700 alumni and corps members are partnering with children, families, and educators to prepare students for the future in one of the most diverse cities in the U.S.

Get in Touch with TFA Houston