When Your Students Become Your Family

Scarlet Cornelius (Greater New Orleans '04) has continued to support her students beyond the classroom, creating an extended family in the process. 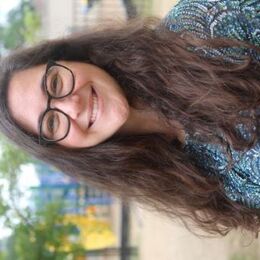 A Louisiana native, Scarlet Cornelius originally intended to go to law school. Instead, she decided to join Teach For America to teach in her home state. During her second year of teaching, Hurricane Katrina hit and she evacuated along with most of the other corps members in Greater New Orleans. Her hometown of Bogalusa was hit with the eye of the storm. She didn’t know where her family was for two weeks and they were without power for a month.

Although it was a traumatic introduction to her career in education, Scarlet didn't give up. She continued to teach and eventually moved into other roles in education at the request of her students. As she continued to follow her students' lives and develop opportunities to help them succeed in their pursuits, her students and families invited her into their lives. Along the way, she also built important relationships with her colleagues and other TFA alumni. Now, she has an extensive community of students and peers that have become her family.

In the interview below, we asked Scarlet to tell us what she has learned about the importance of building relationships - and lifelong friendships - with her students and colleagues.

What was your Teach For America corps experience like?

I joined the corps in 2004 and was placed at Ralph J. Bunch Middle School on the east bank of Jefferson Parish. My principal, Ms. Drew Dumas, was incredible. She very quickly took me under her wing and became a mentor for me.

When Hurricane Katrina hit, Ms. Dumas asked me to come back to teach after Jefferson Parish schools opened in October. I bought a car and commuted from Bogalusa to Jefferson Parish to teach. Eventually, I bought an air mattress and lived with a colleague for a month before I was able to get back to my house in Orleans Parish. That school year, everyone was in survival mode. I felt very fortunate that, unlike so many other corps members in Greater New Orleans, I was able to spend two years at the same school, with the same principal, in the same content area. We had huge classes – sometimes 45 kids.  I focused on providing stability. For so many students, immediately post-Katrina, school was the closest thing to normalcy.

As a TFA alum still working in schools, how have your relationships with your students grown over the years?

In 2006, I was introduced to Adam Meinig, a TFA alum who was starting KIPP Believe College Prep. It was the first traditional KIPP school in New Orleans and it kicked-off with 90 fifth-graders. He hired me as the founding math teacher. I taught middle school for several years and began receiving phone calls from former students who moved forward to KIPP Renaissance High School (now KIPP Frederick Douglass High school). They wanted me to come to their school. I took heed and made the move, serving as Dean of Students and Assistant Principal at KIPP Renaissance for two years.

In 2014, as my first class of students from KIPP Believe were starting to graduate, I took a role as an alumni advisor and helped to start the KIPP Through College program. I’ve become very close with that group of students. Five of my founding students teach alongside me at KIPP New Orleans now. They often joke that I am following them through life – and I am. My community is now encompassed of my students and their families. I celebrate their successes and their losses with them. That is my hope for every educator – that they feel that kind of connection and build a “village” with their students and families. 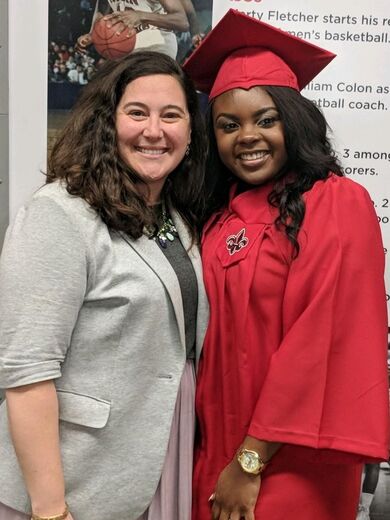 Scarlet Cornelius (GNO '04) and her former student Khaila at her college school graduation.

I’m very proud of the relationships that I’ve built with my students. I witness great milestones everyday of former students like Khaila. I taught her in fifth and sixth grade, was her assistant principal in 11th and 12th grade and was her college advisor at the University of Louisiana at Lafayette. I witnessed her graduation from ULL and watched her now-husband propose to her right after her graduation, which was one of her childhood dreams. I attended her wedding and wrote her letter of recommendation for her to attend graduate school at Tulane University. Today, I am still close with her and her parents. I have witnessed and played a role in the entire trajectory of a student’s life, and that’s the fuel that continues to drive me every day.

How did you and your team develop the KIPP Through College program and the KIPP Alumni Teaching Force?

I worked with KIPP Through College for five years, and over time saw that we needed to cultivate students’ passion and purpose in high school to help them understand “why and how to be successful in college." Joey LaRoche, another TFA alum, came to me with an idea he had piloted to teach high school students how to be teachers. I worked with him to restart the program as the KIPP New Orleans Alumni Teaching Force. Students in their senior year take an education class and the following year, they’ll be able to receive college credit. Two days a week, they serve as a teaching assistant at a nearby elementary school. We provide observation and coaching. Last year, 17 students completed the program and this year 19 students participated virtually. The students also receive support from us in college, even if they choose a non-education major. We’re working with New Schools for New Orleans to bring the program to other schools and CMOs across the city. This reinforces my belief in “by the community, for the community.” It allows us to bring homegrown teachers to classrooms in New Orleans. Armed with the right tools, we hope students are encouraged to return and teach at KIPP. This is my third year running the program, and this is my favorite role yet.

“The more comfortable I became as an educator, the more I realized I had to model authenticity and show my students the real me, which helped to create stronger relationships.”

How has your outlook on leadership changed over the years?

When I look back on my early years of teaching, I saw myself as a math teacher and didn’t realize my purpose as a role model for students. Now that I’m teaching students how to be teacher, I impart upon them the importance of building relationships with every student. In my role as a mentor, I am there for students and add value to their lives. I’ve learned that celebrating challenges, failures, and mistakes are incredibly important. I’ve learned to see everything as a learning opportunity and a coachable moment and I feel very honored that I’ve been able to grow into that person. I believe my career in education has made me a better parent and a better person – we can’t ask our kids to be people they’re not and to be perfect when we aren’t perfect. We weren’t perfect when we were their age! The more comfortable I became as an educator, the more I realized I had to model authenticity and show my students the real me, which helped to create stronger relationships.

How has the TFA network contributed to your growth as an educator and as a professional?

The TFA alumni that I’ve worked with at KIPP have become my family – from Adam Meinig, who brought me to KIPP Believe, to Joey LaRoche, who initiated the idea that became the KIPP New Orleans Schools’ Alumni Teaching Force, to many other alumni who saw my potential and had faith in me and my work. Together they gave me hard feedback and they continue to hold me to higher standards. In my personal life, Sean Duncan and I served in the TFA GNO corps together, evacuated together during Katrina, and years later he officiated my wedding. Another alum, Diana Archuleta, and I lived together for five years and I was in the room when she gave birth to her children. I get to see my daughter’s clothes revived and reimagined in my dear friend and another fellow GNO corps member, Sally Witherspoon’s daughter. They truly care about me. The TFA bond allows us to be each other’s biggest cheerleaders and biggest critics. Our friendships make us the best we can be, and for that, I am eternally grateful.