Markus Flynn was called to Minnesota as a Twin Cities corps member. Now, as Executive Director of Black Men Teach, he is committed to recruit, prepare, place and retain Black male teachers in elementary schools.

By Maryam Zahid and Alyssa Story 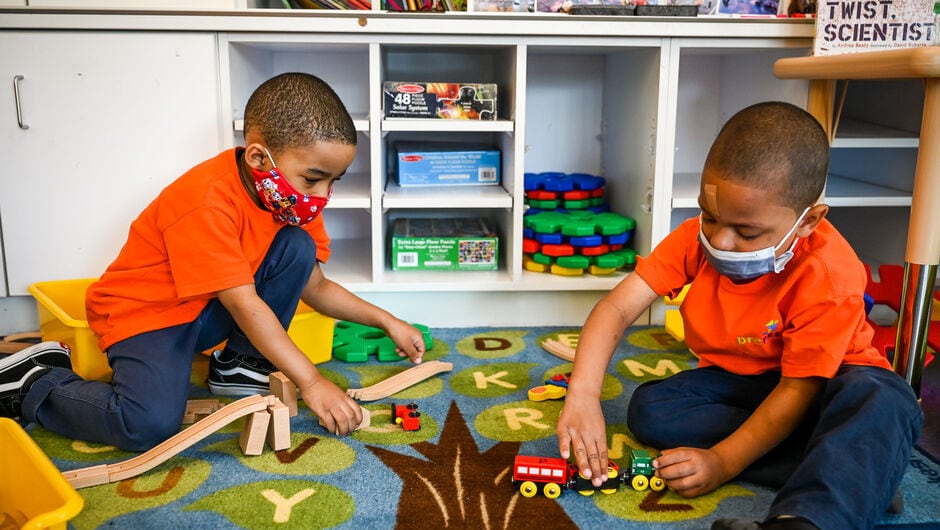 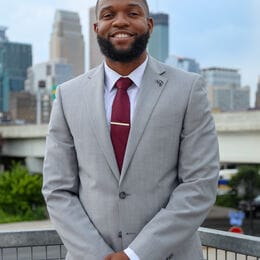 “My first introduction to Minnesota was a level of hypocrisy so blatant it almost made me scared to move to Minneapolis.”

Markus Flynn (Twin Cities ‘19), the Executive Director of Black Men Teach, researched Minnesota prior to moving to Minneapolis from Chicago as a corps member in 2018. In a speech given during Alumni Induction in 2020 Flynn states, “I can’t say I was surprised by what I found as I had already heard about the Minnesota Paradox before. I saw the state appear on multiple lists simultaneously: First as the second best state for education after Massachusetts, and then as the state with the second to largest Black-White achievement gaps in the country, along with some of the lowest graduation rates for Black, Indigenous and Latinx students."

He also noted that Minnesota was listed as the 4th best state in the country to live in, yet in other lists it appeared as the worst state to live in if you are Black. How could this be? Markus Flynn doesn’t believe in coincidences. Throughout his time as a Teach for America Corps Member and into his work with Black Men Teach, he worked to deepen his understanding of these disparities while fighting for a solution that begins in the classroom.

Markus proceeded to move to Minnesota as a 2019 Corps Member, teaching 6th Grade Science at Prodeo Academy. “In my opinion, teaching is the purest form of activism. What connects us [2019 corps members] is our unwavering commitment to activism and I cannot imagine a city that needs this more than the Twin Cities,” reflects Markus, noting the equity-forward approach Teach for America takes towards education.

Flynn had the eventual goal of transitioning out of classrooms and into leadership positions within education and his position as a corps member allowed for him to intimately understand the experiences of a classroom teacher. “If I wanted to be a school principal,” said Flynn, “I had to go to the classroom first."

With two years as a teacher under his belt, Flynn understands just how impactful a teacher's influence is on students. A student spends a large amount of time with their teacher and looks to them as a role model. The impact of teachers is something that continues far outside of the classroom, and the mark an educator leaves is at the core of a person's life.

“If you're able to impact education,” said Flynn “you get to impact the course of the trajectory of the whole community." The bottom line is that students thrive when they have culturally responsive educators that represent their communities and believe in them. However, there is a severe need for a pipeline of diverse educators to fulfill these roles.

Even though about half of all public school students are students of color, only 17 percent of teachers identify themselves as Black, Asian, Native American or Latino according to a Stanford study. Of that 17 percent, only two percent are Black males. In Minnesota alone, there are less than 50 Black male educators in elementary schools.

“When I moved to Minnesota I knew I needed to find an affinity group for black educators and so I started doing google searches, no joke.” Eventually Markus came across Black Men Teach, a non-profit with the goal of connecting more Black men with primary and secondary classrooms. In 2020, after Flynn had made some headway getting connected to the organization, he saw they were launching a search for their first Executive Director.

“The opportunity to be [Executive Director] and do this full-time is something I couldn’t pass up on,” said Flynn, “I really love teaching, and I had no plans of leaving the classroom that soon, but this is probably one of the few opportunities that could exist, across the country, that could pull me out of the classroom.”

As the first Executive Director of Black Men Teach, Flynn uses the real experiences of educators and student testimonies to understand needs of classrooms. “The reason I felt like it was my dream job,” said Flynn “ is because part of what I felt like my mission in education was to increase the representation of teachers by inspiring my students.”

Flynn believes that career paths and inspiration are forged in the classroom, and the stark lack of diversity in the demographics of teachers, especially in predominantly Black classrooms is damaging to students and to the prospects of growing a pipeline for Black educators. Currently, one 1.4% of Minnesota’s teachers are Black.

The impact on student trajectories when Black men teach is undeniable. Multiple studies have shown the power of having Black teachers, especially on Black students. When Black students have at least one Black teacher by 3rd grade, they’re 13 percent more likely to enroll in college. For low-income Black boys, the rate of on-time high school graduation rate climbs by nearly 40 percent. Additionally, when classes of predominantly Black and brown students have a teacher of the same race or ethnicity, they are held to high expectations 66% of the time, compared to only 35% of the time when they have a teacher who did not share their race or ethnicity.

Black Men Teach partners with K-5 schools, higher education institutions, teacher preparation programs and community organizations to show Black men viable, affordable pathways to teaching, and support them as they navigate training, licensure, and new classrooms. They employ their Theory of Action to achieve their goal of 8 partner schools having  20% of their teaching staff be Black men within 6 years, while building a pipeline that will develop 100 Black male teachers within 10 years.

Reflecting on Minnesota and what it is going to take to create long-lasting change, Flynn calls upon a quote from Martin Luther King Jr, “One of Dr. King’s more famous quotes reads ‘The arc of the moral universe is long. But it bends towards justice.’ Clearly that man has never been to Minnesota. What I would change is: ‘The arc of the moral universe is long and extremely resistant to change. But if we all grab a hammer, it has no choice but to bend towards justice'.”