The Zoom-In Bulletin Board: Steal This

How one teacher uses a bulletin board to “zoom in” on questions that were tricky for her class on their previous assessments. 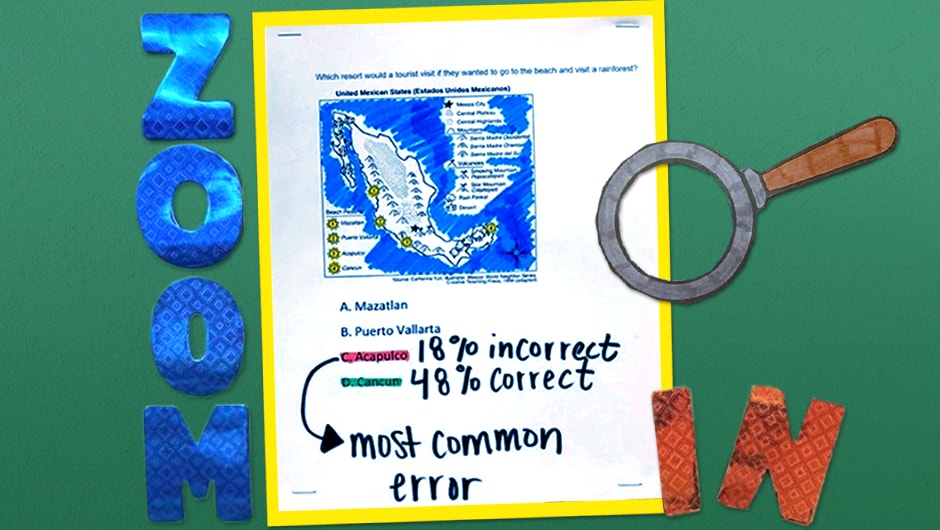 This story is part of a monthly feature called Steal This. Every month, we will highlight creative classroom projects that can be easily replicated by other teachers without special training or budget. Last month we shared how one teacher designed a voting simulation project that engaged future voters. Got a project you’d like to see covered in Steal This? Let us know about it.

During her time as a fifth-grade social studies teacher with Teach For America, Corrine Brown (Greater Cleveland ’17) knew that data mattered. When going over the module test results at the end of each unit with her dean of curriculum, Corrine wanted to find a solution that would help her students better understand the data behind their grades and what it meant.

To help engage her students in their own assessments and places where they needed to be proficient, Corrine came up with a Zoom-In Board. The bulletin board showcases at the end of each module the question most missed by the class and use this as a means of reflection.

Read on to learn how you can steal this idea for your classroom.

How To Set It Up

The Zoom-In Board is economical and efficient. When Corrine first used the board, she took a question from the test, colored it in with marker (the color printer wasn't working), wrote the correct answer on it and the percentage of students who got it right and then wrote the most common error. In the end, the materials she used amounted to just paper and a marker.

Corrine used her Monday morning class meeting to introduce the bulletin board to class. Together, they gathered around the board to find where the disconnect was. They discussed the specific question, the solution, and why some students picked one answer versus another. Finally, they talked about how they could solve it correctly if presented with a similar question in the future. The Zoom-In Board can be as elaborate or as low maintenance and easily maintainable as you’d like it to be.

When students receive a grade or test score back, they often just toss it, or register the grade and don’t examine it further. They often don’t have the opportunity to take a closer look and assess what they had gotten wrong, let alone how to fix their mistakes in the future. Corrine found having the most common mistakes visualized in the classroom was helpful to students, especially when they encountered a similar question on future assessments. The students also engaged with the Zoom-In Board and eagerly waited for Corrine to post a new problem, which she did every two weeks after the unit exams.

Corrine’s school utilizes mastery-based grading or standards-based grading. This means students always go back and revise their assessments after grading. While students are faced with a different assessment the next time around, there often is a direct correlation between them understanding what errors they made the last time and being able to apply that understanding during the next checkpoint.

Corrine believes that everything in the classroom should have a purpose and be talked about. If not, it probably shouldn't be there.

With that in mind, the Zoom-In Board can be as elaborate or as low maintenance and easily maintainable as you’d like it to be. You can discuss it in a morning meeting as Corrine did, or if you don’t have time, you can do a review during a quick gallery walk.

For Corrine, who currently teaches fifth- and sixth-grade reading and math intervention in Cleveland, Ohio, the overall purpose of the bulletin board is self-improvement: “The important thing is that kids can reflect,” Corrine says. “It’s about seeing how we did the first time and seeing how we can grow in the future.”

Did you steal this project for your classroom and get students’ published? Let us know.