A week before our 2017 incoming corps members engage with the Indianola community at their Mississippi Induction, we go inside the intervention program at Carver Elementary School that helped turn assessment scores around. 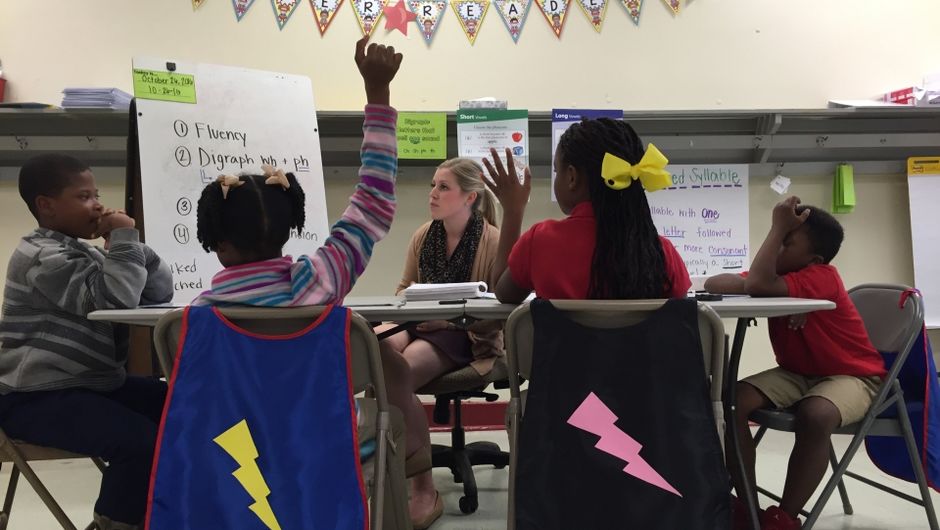 After one of her students finishes reading, Kristan McCullum (Mississippi ’11) hands her a marker. “You only missed two words,” McCullum says, “and you’re going to be mad about this one.” The student nods, then begins to color her graph, her sense of purpose apparent.

Other teachers at Carver Elementary School, in Indianola, might be surprised by how quiet this room is. The students here are often labeled the “bottom of the bottom”— the students most at risk to fail the state’s Reading Gate test, and thereby get stuck again in third grade. In a typical classroom, the results often appear as behavior problems. But McCullum is not a typical classroom teacher: she is a Literacy Fellow with the Indianola Promise Community (IPC), and, three times a day, five days a week, she works with different groups of “high risk” third graders. 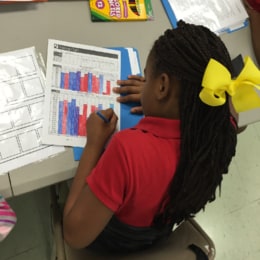 The results show that the system works: last year, high-risk students at Carver were 2.5 times more likely to pass the Reading Gate on their first attempt. The IPC’s data suggests that the interventions at Carver alone raised the pass rate by 7 percent—district-wide.

The Indianola Promise Community, sponsored by the Delta Health Alliance, is a network of nearly 30 programs and initiatives, together forming a “pipeline” that supports children and families in Indianola. Created in 2009 and modeled after the Harlem’s Children Zone in New York City, the IPC combines health care, government, community, faith-based, and education services. Many of these services are provided in concert with partner organizations.

The IPC Literacy Fellows program was in part an attempt to unite with one more partner: Teach For America.

Two years ago, a new tutoring program stalled out, in part due to the lack of qualified applicants. Then IPC staff noted that there were many TFA corps members who, after their initial two-year classroom commitment, wanted to stick around, but in a different capacity.

“We wanted to tap into their vision, their energy, their intelligence,” says Allison Poindexter, the project director overseeing the program.

So at the beginning of last school year, McCullum moved back to the Delta after a year away completing a Masters program at Columbia University. “Third grade is such a crucial year, and I wanted to be a part of that,” she says.

She joined three other Fellows for a challenging year of work. The IPC and the district had to come to consensus on which students to serve because the four Fellows, none of whom had taught in Sunflower County, would need to build relationships in the school. “Why would some teacher want to hand their child [to us] for over an hour?” Katelyn Bienemann (Mississippi ’11) says. “They didn’t know what we were doing. They didn’t know if we were qualified or not. But they’ve taken us in now.” “Our team of Educators in the SCCSD attempt to exhaust the day by ensuring that each student receives as much instruction daily as possible,” Miskia Davis, Superintendent of the Sunflower County Consolidated School District, explains. “To have a partner that realizes the urgency of inspiring and educating these children is imperative.  We are thrilled to place our youth in optimal learning environments with the IPC Fellows.  Smaller classes and quality one on one time with students is a model we would love to deliver to every child.  This partnership allows us to provide that to our students who need it most.   We are pleased with the gains we have collectively achieved for these young people.”

The Fellows’ students are pulled from their classes once each day, in groups of two to four, to work on fluency, phonics, vocabulary, and comprehension. The Fellows credit the program’s success to the quality of the curriculum, and the consistency with which it is delivered. By working in small groups, the Fellows ensure that each student gets substantial attention—and substantial time reading.

Kelly O’Brien (Mississippi ’13) is a first-year Fellow, and says that, after just a month with students, she is already seeing impressive growth. “Some of my students’ fluency has grown by 20 words per minute already,” she says. “That’s literally just from reading every day. It’s pretty phenomenal.” Drew Powell (Mississippi ’13), another first-year Fellow, notes that such jumps can be essential for students who might otherwise be written off. 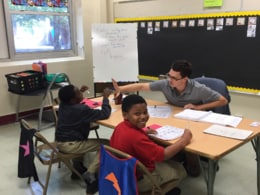 For the Fellows, too, the impact is clear. Powell, for example, says his experience has him thinking about returning to the classroom. He spent three years as a middle school teacher, looping with the same set of students—a small handful of whom he never could figure out how to help.

“I want to find those sorts of kids—the ones that get missed. I could have helped Corderius, I think. I think I could figure it out now—there just wasn’t time in the classroom.”

The Delta Health Alliance received a second US Department of Education Promise Neighbordhood grant in Decemebr of 2016 to initiate the Deer Creek Promise Community (DCPC) in Leland and Hollandale School Districts. Through DCPC, Delta Health Alliance will expand its successful Literacy Fellowship into these two school districts in the upcoming academic year.