The Art of Representation

According to James Baldwin, art must be a confession. In this capacity, art has the power to disrupt the peace and illuminate its darkness. Perhaps, representation is the art form that liberated me from myself through the creativity of Black life. I was 13 years old when I decided my Blackness was beautiful because I had a teacher whose Blackness mirrored my own. How old were you?

Ms. Brooks became my math teacher in 2006, right as I transitioned into middle school and began to discover who I was as opposed to who I wanted to be. I remember being in awe of how much her skin reminded me of my own. It was a soft combination of dark and chocolate brown hues that radiated flawlessly against the staple red lip she wore religiously. Ms. Brooks had a laugh that was full and that always came easy, even when expectations in her classroom weren't met. “There is a world out there,” she often said, “a world full of problems that are waiting to be solved. How will you show up?” She inspired me to remain curious about the world around me. She taught me how to problem solve and think critically using basic arithmetic and her favorite Beyoncé records. Ms. Brooks was not only my first Black teacher, she was my favorite teacher, and she taught me the importance of self-love by being unapologetically herself which was unapologetically Black.

In 2018, Johns Hopkins University and American University conducted a research study on the impact of teacher representation on students of color in American classrooms. The study found that same-race teachers positively benefit students who look like them. For Black students, in particular, positive outcomes are sparked by a “Role Model Effect” which can last into adulthood and potentially shrink the educational achievement gap. According to the researchers, by having just one Black teacher in elementary school, Black students were more likely to graduate high school and significantly more likely to enroll in college. Thus, the Role Model Effect has the potential to give Black students the ambition to achieve far beyond what they could imagine.

Though I didn’t realize it in 2006, Ms. Brooks invited me to come home to myself — even before I knew who I was. It was in her presence that I found solace in the shade of my skin. It was in her classroom where I learned that Black and beautiful could occupy the same space. Today, my work is dedicated to challenging and reimagining the systems, ideologies, and practices that do not positively serve Black people and our children. That’s how I choose to show up in the world and thanks to Ms. Brooks, that's how I've achieved more in my life than I could have ever imagined.

I was just 13 years old when I decided my Blackness was beautiful because I had a teacher whose Blackness mirrored my own. How old were you? 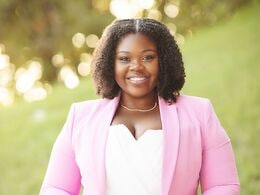 Love Toussaint (South Louisiana '15) is a Manager, Teacher Leadership Development in Greater Tulsa and supports a cohort of first year corps members. She is also a doctoral student at Johns Hopkins University and her research is focused on contextualizing the intersections of racial identity development and holistic wellness.