Two years in the corps helped prepare Jacob Babcock to run a successful (and empathetic) business. 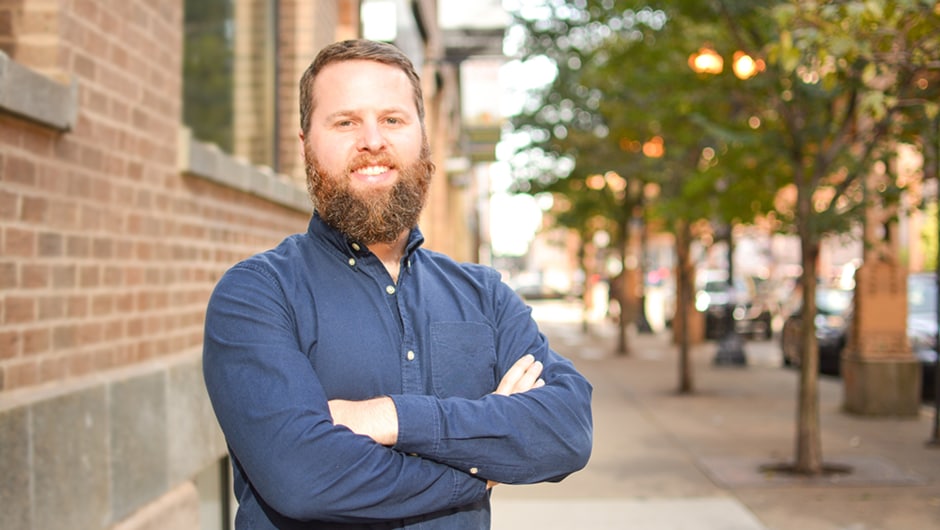 Joining TFA may not be the first option that comes to mind for college grads preparing for a successful career in business leadership. But, for many alumni, including Jacob Babcock, the founder and CEO of NuCurrent, a wireless charging company based in Chicago, it's proved to be an important foundation, helping to develop essential leadership skills.

Jacob was recently featured in Crain’s Chicago Business 40 Under 40, a short list of entrepreneurs, government operatives, corporate VPs, inventors, and others who have made a remarkable impact on the city. He is also a Teach For America alum (St. Louis '04) and credits his experience as a corps member for much of his success in leadership.

Jacob has spent his entire life in the Midwest, growing up in the Upper Peninsula of Michigan and Wisconsin, attending Indiana University, teaching in St. Louis, and founding his business in Chicago. While he grew up in a home that openly discussed issues of inequality and social justice, he admits that his upbringing in the wealthy, predominantly white suburbs of Milwaukee obstructed his awareness of the world beyond his own environment.

When he left home to attend business school at Indiana University, he was looking for opportunities to make a difference. Shortly after returning from a cross-country bike ride to raise money for people with disabilities, he attended a Teach For America information session.

He thought, “This sounds like a dream come true. It sounds like volunteer work—an opportunity to help people—but it’s a real job.”

He applied to early admissions, got in, and never considered doing anything else after graduating. He felt as if joining TFA was a calling.

He ended up teaching high school in St. Louis and says that with the exception of running his business over the last few years, teaching was the hardest thing he has ever done.

“I cried a lot in my first year,” Jacob admits. “It was a moment of reckoning and I realized leadership doesn't come for free. You're forged in that fire. And, on top of that, you're gaining this realization every single day that the world you grew up in is not the world that really exists.”

It was also extremely rewarding but not in the ways he was expecting.

“There were a lot of places to find joy," Jacob says. “I know a lot of corps members found a way to build relationships with kids outside the classroom. I coached football and that was a way to connect with some of my students in a different way.”

He also felt like TFA provided him with the training and mentors that helped him feel prepared and confident, even when, at the last minute, he was asked to go from teaching a core classroom of 20 students to becoming an extracurricular teacher of 150 students over the course of a day.

“It was a moment of reckoning and I realized leadership doesn't come for free.”

"I can't think of any other job in the world where, right out of college, you have 150 people looking to you as their leader. You have to set goals for them, motivate them, understand them, and empathize with them," Jacob says.

Today, if he's talking to a recruit who is thinking about doing Teach For America and wants to get into business, he tells them, “You could go to any big consulting agency and learn all those MBA concepts like discounted cash flows, different strategic paradigms, and presentation decks but you won't have anything near the leadership preparation that TFA offers. It's the most accelerated path to leadership I can imagine.”

What makes NuCurrent special isn’t just the innovative technology but the culture created by Jacob, for which he credits TFA. Jacob still supplements his business development with the TFA leadership curriculum he gained as a corps member. From leadership skills to goal-setting to corporate culture and hiring practices to diversity, equity, and inclusion, the concepts he learned at TFA are core to his management style.

“We scorecard everything,” he says with a laugh. “We use a lot of tools that Teach For America teaches.”

“ TFA is the most accelerated path to leadership I can imagine.”

As someone who is partially responsible for developing the next-generational workforce, Jacob wants other business leaders to understand the importance of closing the gap in educational equity.

“We're creating a talent base that will help our businesses. If the need is ignored, we will lose that talent. We shouldn’t just invest in the top of the talent pool. You need to start at the source and build everything up. Investing in educational equity is essential to anyone running a business and plan to be running a business 10 years from now. These students are the people that are going to be driving your workforce.”

Jacob can’t imagine what his life would look like without TFA. He recognizes he comes from a very privileged background. Without TFA, he knows he may still be oblivious to the systemic equities that exist in education. He pauses to think and finally says, “The exposure to that inequity changed everything, every single thing, about my life. It impacted everything and I don’t know who I would have become without it.”