Steal This: Letters to the Local Newspaper

How one teacher used a letter-to-the-editor project to encourage students to lift their voices in their community on the issues they cared about the most. 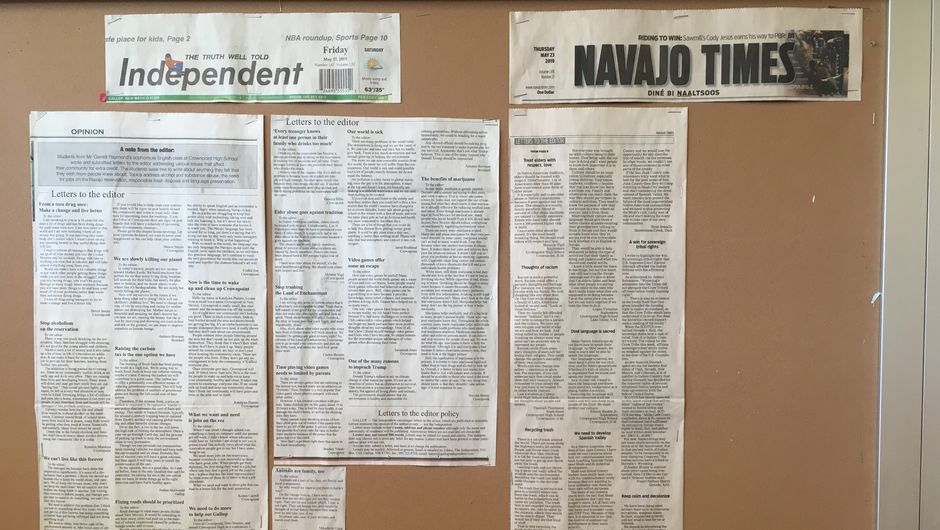 This is the first installment of a monthly feature called Steal This. Every month, we’ll highlight creative classroom projects that can be easily replicated by other teachers. Have a project you’d like to see covered in Steal This? Let us know about it.

Garrett Raymond, a first-year teacher in rural New Mexico, was seeking a classroom project that would engage his students in their local community. The idea he landed on: have students write letters to the editor of the local newspaper.

In the middle of annual testing season and with summer break on the horizon last spring, Garrett (New Mexico ’18) knew that student engagement was suffering in his 10th and 12th grade English classes. Looking for a way to focus his students while continuing to develop their writing skills, Garrett landed on the letter-to-the-editor project. Charging his students with writing a letter to the local newspaper on any topic they wanted—with the added appeal of extra credit if they actually submitted it to the newspaper—students set to work.

Much to everyone’s surprise, the letters started to get published. On topics from politics to drug use, students’ voices were elevated and validated.

Read on to see how you can steal this idea for your own classroom.

Garrett teaches in Crownpoint, NM, on the southeast edge of Navajo Nation. He wanted to find ways to push his students to become more active participants—more engaged citizens—in their town.

Garrett’s thought was that by encouraging students to get their ideas out into the world, students would see that others care about their viewpoints and ultimately lead them to greater civic involvement. 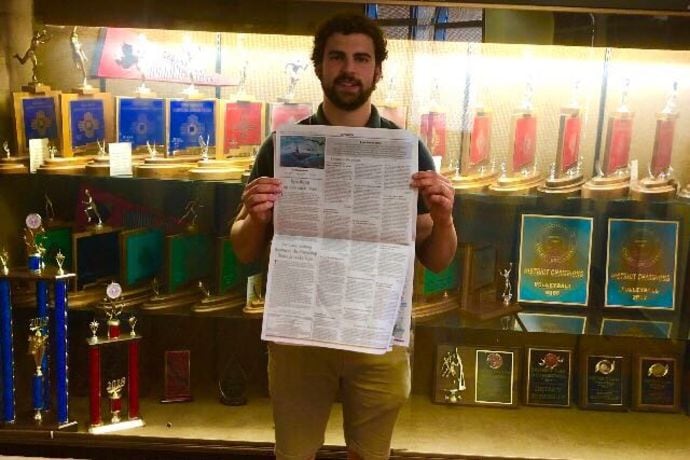 Garrett Raymond (New Mexico ’18) had his high school English students write letters to the editor of the local newspaper. Much to everyone’s surprise, they were published.

Garrett’s school sits in a community of about 2,000, and is about an hour from the closest city, Gallup, NM. He says that the internet at his school is spotty, and access to computers can be a challenge during testing season. He had to think creatively about resources for this project, which in some cases meant typing letters himself and submitting them on students’ behalf.

In addition to resource challenges, Garrett had to overcome student pushback. He says his students were not shy about the fact that they didn’t like the project initially. Yet things quickly shifted when their letters started to get published.

Garrett’s goal was to have his students form opinions around a topic and use modes of persuasion to convince others of their opinion. He started with the question, “If you have an idea that you want to get out into the world, how do you share it with others?”

This question led to a conversation about social media and freedom of speech. Garrett’s students also spent time reading published letters to the editor and categorizing them into various modes of persuasion.

To get his students’ wheels turning, Garrett started with a free-writing session with several different prompts: What is one thing about society that makes you angry? What is one thing that you know that you wish other people in America knew? What is one problem in your community that could be solved or improved, and how?

Moving onto the formal writing stage was a challenge for some students, particularly those who struggle with writing. But, the beauty of letters to the editor is they’re short and approachable, Garrett said.

Shorter pieces also allowed for a quicker revision process. Garrett said the peer review stage of the writing process was never big with his students, but a quicker turnaround time helped a lot.

Additionally, Garret said he let students’ creative juices flow by taking a hands-off teaching approach. It was helpful to make suggestions during the brainstorming process, direct students’ thoughts, and give guidelines to their writing. But allowing students to develop their thoughts and use their personal writing style is key, he said.

Submitting to the Paper

With no personal connection to the community’s local newspapers and still being relatively new to the New Mexico area himself, Garrett knew it was a long shot to get students’ letters published. He and his classes of high school sophomores and seniors were blown away to find their names in the paper just a few weeks after submitting them to two local papers, The Gallup Independent and the Navajo Times. This may not be a possibility in all communities, so consider reaching out to a newspaper ahead of time or finding ways to publish material digitally.

Garrett said that having high expectations for students is crucial. It can help free-form projects like this one go more smoothly. Start the year with high standards, and even if they’re not met for a long time, continue to hold your students accountable and push them to do better.

Garrett also advises being candid with students. Share the reasons for why you’re making particular decisions as a teacher, and then have conversations around why you have the classroom rules that you do. The more you can engage students in their own education, the greater sense of agency they’ll have.

Did you steal this project for your classroom and get students’ letters published? Let us know.