Must See TV, the College of Equity debuts on YouTube

Unable to clone himself, Brandon Hersey (the only African American male teacher in his suburban Seattle school) did the next best thing. He took his classroom to the internet. 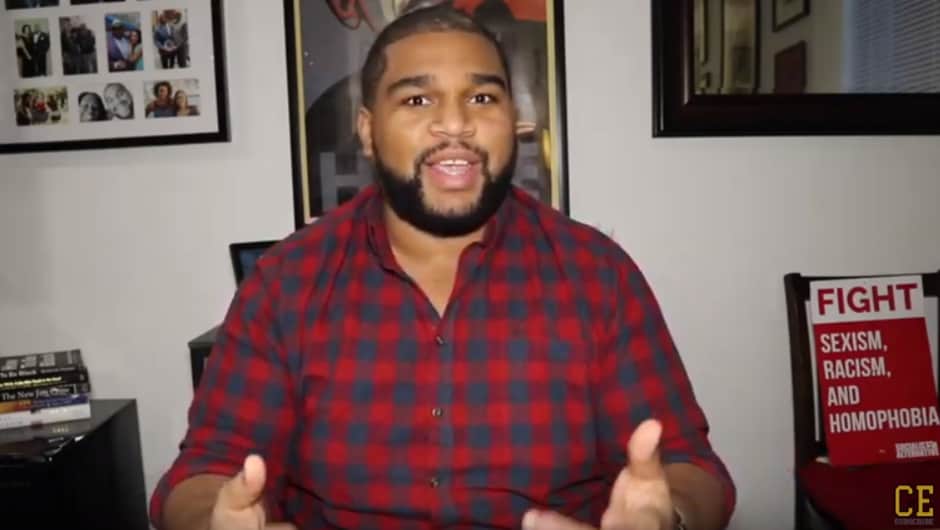 Brandon Hersey (Washington, ’16) is a new teacher, but he is sure about a few things. Online education videos are boring. African American male teachers are rare. And students of color are more likely to graduate from high school if they have even one teacher of color.

So he took things into his own hands this winter and launched the College of Equity—a snappy, social commentary channel on YouTube designed to help teachers connect on a deeper level with students of all races, genders or abilities.

His topics are ripped straight from the headlines with titles like Dear Trump: My Students are not from S---hole Countries and Scenes from the Seattle Womxn’s March. He could use your help spreading the word—subscribe here or better yet, share!

What was your inspiration for College of Equity?

I wanted to bring a lens of equity and education for students of color and female students to a platform that could be easily accessed by teachers, family and community members who were interested in finding ways to engage with students on a deeper level to foster relationships and dismantle racism.

I was really inspired by a Johns Hopkins University study that came out last year that said that having one teacher of color for one student of color had an exponentially positive effect on their chances of completing their K-12 education. I thought that was amazing.

But there are a lot of classrooms—due to gentrification, especially here in Washington state—where we see a lot of black and brown student faces pouring into traditionally white suburban schools. And the hiring processes for these classrooms has not had time to catch up with the incredibly fast changes that gentrification is causing.

Is that the case in Federal Way?

Yes. In my school in Federal Way, for example, we just had a huge apartment complex with five bedroom apartments put up. Of course a lot of families from South Seattle, Tacoma, even Olympia, really jumped on this opportunity to get these units and have a more affordable lifestyle for their families. Totally understandable. What the district wasn’t prepared for, especially my building in particular, was the influx of varying cultures that the staff here were not necessarily equipped to handle on a socio-emotional level.

I can’t clone myself, I can’t be in more than one classroom at once, no matter how much I would love to be. So I thought, what if I make my classroom bigger? I thought YouTube would be the best way to do that and that way I’d have access to anybody who needed tips, tricks advice on how to engage with students in a more equitable way.

Why the focus on teacher-student relationships, rather than other instruction tools?

The best way to show the importance of relationship is a story about my mentor, an instructional coach here at Federal Way. I made a video about the controversial H&M hoodie (that featured a black child wearing a hoodie printed with the logo “Coolest Monkey in the Jungle”). My mentor, who is an incredibly sweet white woman who grew up in Bellevue, came up to me and said, “I have a question for you. Would this have been a problem if the child in the sweatshirt was white?” And I said, “No.” And she said, “Well, I don’t understand that because we call all of our kids little monkeys, it’s a term of endearment.”

And I was like, “OK, well let me present this to you from my perspective. Being an African American male from the South, I have a lot of context for why this isn’t OK.” So I laid out the idea that African Americans have been compared to simians and apes, accused of having similar DNA, in an attempt to convict black men for crimes they did not commit. Basically, the ape comparison was a form of Jim Crow oppression to keep African American men in chains when slavery was no longer an option. Misusing science, comparing black men to apes, was a way to justify the incredibly racist tactics that they used to keep our people oppressed.

And she had no context for this. And she was like, “Of course that makes sense!”

That’s such a beautiful teaching moment, how do you see that change the environment for students?

Having the YouTube channel as an outlet breaks down the barriers, not only from colleague-to-colleague, but it also has that translational effect, so that a teacher watching the video has the opportunity to understand where a student might be coming from on a completely different issue. Because they have context now for why one thing (like a sweatshirt) may not be positive for an entire population, they may wonder “What else I have not had my eyes open to?”

That in itself makes this type of content incredibly valuable because it gives people the opportunity to learn and educate themselves in a low-stakes environment. In the way that political rhetoric has polarized Republican, Democrat, conservative, liberal, in order to have these courageous conversations and avoid the polarizing team sport that politics has become, we have to first assume good intent but also make ourselves open and vulnerable not only to start these conversations but to have these conversations in a way that isn’t necessarily judging the other person.

I believe building that understanding, building those relationships from adult to adult, yields an innately positive effect on an adult to child standpoint.