An alumni educator shares how her identity has shaped her experience as a classroom leader. 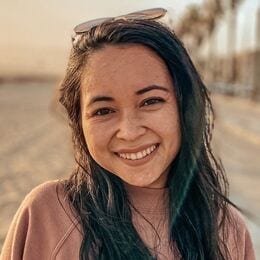 May is both Asian American and Native Hawaiian/Pacific Islander Heritage Month and Teacher Appreciation Month. We asked alum Sonca to share about her experience as a Vietnamese-American educator.

How does your AANHPI identity inform leadership in your classroom?

I was born in Vietnam, but my family and I immigrated to America when I was two years old. For me, my entire life has been based on living out the “American dream”—the dream of doing well in school, to attain an education, and become something in this country. But that dream didn’t come easy or cheap. For me, this dream meant growing up in communities where I’m always the “token Asian kid.” It meant feeling confused being in a country where I was neither Black nor white. It meant learning a new language to speak up against bullies in school. Yet, at same time, I was also pushed by my parents to preserve my roots at home and not feel ashamed of my heritage.

Drawing on experiences I faced growing up, I’ve learned how similar the story of my life is to the life of one little Filipino girl (we are going to call her, “Bella”) who entered into the doors of my classroom. For her, she was stepping foot into a learning space everyday where she stuck out like a sore thumb. In a school with a student population of 1,607 students, 1% classified themselves as “other.” At this school, “other” was the category she and I fell under.  So, it was no surprise that we naturally gravitated to each other.

As her teacher, I knew her struggle. Her struggle of wanting to be seen—to be seen not just as someone who is different; but rather, for her differences to be seen as an edifying cultural experience for all of us to learn from. Therefore, during that year I had to set one very clear goal for myself as an educator: to be culturally responsive. Even if it meant adjusting my entire lesson plans for just that one student—to me, it was all worth it. It was worth it because my classroom became more than just an academic space. It became a space where Bella felt heard, seen, and valued.

“My dad taught me that there’s liberation in using my voice.”

Who is an AANHPI leader/role model you look up to?

My role model is my dad. My dad was half Vietnamese and half French. Growing up as an orphan and a child of mixed race, he was often looked at as “shameful.” When he became a young man, he fought in the Vietnam War and spent many years in prison.

While held captive, he loved sharing war stories and poems he’s written to his prison buddies. He was a compelling story teller—so much so that even the enemies loved listening to him talk. In that, my dad gained a different lens of the idea of “freedom.” While seeking freedom in fighting for his country, he ended up finding freedom in his voice. This awakening moment became transferrable in my life as I was growing in the United States and did not know English.

My dad taught me that there’s liberation in using my voice. To me, learning English was not only a weapon for survival, it was also my ticket to freedom.