Learning As We Lead

In 2007, Vasy McCoy left his architecture career and joined the Greater New Orleans corps, starting a journey of lifelong learning that followed him from the classroom to school leadership. 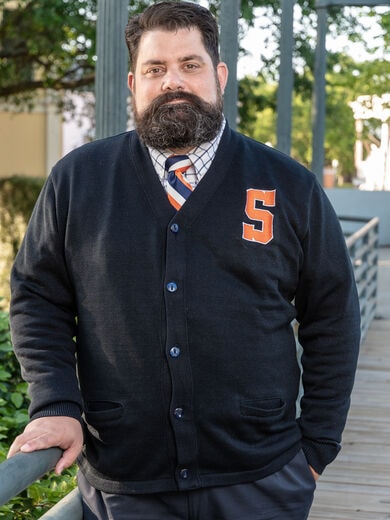 When Vasy McCoy (Greater New Orleans '07) decided to join Teach For America, he already had a Masters degree and had been in the workforce for almost ten years as an architect and adjunct professor. The choice to change careers was challenging as a 30-year-old, but Vasy soon found that education was his true calling in life.

Now a school leader for ReNEW Schools in New Orleans, Vasy's journey has helped him understand the value of vulnerability, community, and lifelong learning. These lessons weren't always easy to come by, but his reflections on growth - both his own and his teams' -  have helped guide him along the way. In the interview below, we asked him to tell us about his journey from architect to school leader, and what he's learned along the way.

Why did you decide to join Teach For America?

In my architecture work, I was building K-12 schools, and in my adjunct work, I saw that a lot of students who had success in high school but weren’t prepared to succeed in college – and that system was particularly stacked against BIPOC folks and kids who weren’t upper-middle class. In other words, kids who didn’t have multiple backstops. That inspired me to switch careers to education, and  in 2007 I decided to join Teach For America. My wife went to Tulane, so we were eager to land in New Orleans to help with rebuilding efforts after Katrina.

I turned 30 during Institute, and so I was older than everyone else in the corps. As a result, there were some things I was more prepared for. I was already used to getting up early and working long days. And, coming from the architecture world, I was used to failure and critical feedback. I was eager to fail, learn, and grow.

What were your first few years in the classroom like?

My first role was teaching science at Sarah T. Reed High School, while it was still being run by the Recovery School District, and there were a lot of other TFA corps members there.  It was early in the days of the transition to charter schools, and the young teachers were able to learn a lot from the veterans as the school evolved and worked together to build on each other’s learning. I stayed for a third year to be a part of the school’s continued growth. And though there were significant struggles, the work that we were doing then set the groundwork for what schools have evolved into over the last ten years.

Even at 30, I was blind to the challenges that daily life held for many of my students. I knew that I came from a background with every possible advantage, but I still wrongly believed that hard work and perseverance were the great equalizers. I didn’t give enough credence to the fact that many students had experienced extreme trauma and the roadblock of bigotry throughout their life. The biggest lesson I learned during that time was that my students had extremely powerful souls, and that I had to honor and support them with every advantage I was given.

How has your outlook on leadership changed over the years?

I came to ReNEW in 2010 as an assistant principal for middle school and was also teaching several periods during the day. Because there were six brand-new principals at ReNEW at the time, we had the opportunity to learn from different people who were all exploring different innovations in their leadership. That was the point when the instructional support from TFA played the most major role in supporting our teaching force. The energy was high, but it took us a couple of years to gain the experience to match that energy. The folks that stayed have become amazing teachers and leaders for our school or throughout the city – two of our three assistant principals have been at ReNEW since the beginning, and half of our leadership team are TFA alumni. I think that like any other profession, you’ll be so much better 10 years down the road, but you have to hold on to that initial spark and energy.

“I’ve learned that building a strong school culture is about vulnerability and openness and serving the other people on your team.”

When I came into this work, out of the professional world of architecture, I had a very businesslike mindset and I wanted to be respected. I’ve learned that building a strong school culture is about vulnerability and openness and serving the other people on your team. I also learned that leadership and leading adults is a completely different skill set from teaching and leading kids. It was important to my growth to have a lot of educators around me who were eager to learn about leadership, didn’t pretend to know it all, and who had a growth mindset. I didn’t have to pretend to have all the answers and we grew together.

My driving leadership concept centers around “agape” – a type of love that is freely given to all, an unmerited love. This means that the kids don’t have to earn our love and respect, they are loved as soon as they walk in the door. I feel the same way with teachers – I will love and support my teachers from the beginning, which makes it easier to build a community and develop sustaining trust.

If you had the opportunity to talk to Vasy from 2007 and give him advice as you were entering your experience in the corps, what would you tell him?

One of the hardest things about that time was that everything was new and happening so fast that it was a blur. It was a unique time to have an important impact because the school system was being created anew. I would tell myself to slow down and take it in, to learn from everything. I also wished I’d gotten involved in community-building sooner, as I initially focused a lot on academics and not enough on creating strong community relationships. I also wish I had paced myself with New Orleans food!

One of our behavioral interventionists at ReNEW was a student of mine when I taught at Sarah T. Reed. I’d worked with him a lot when I was teaching because he always seemed like he was trying to find himself, which was understandable given that he was dealing with several traumas, including Katrina. It was gratifying to see him apply for a role at my school and to see how far he’d come. He’s been with us for four years now and remembers snippets that I had said and done in a classroom a decade ago that I’d completely forgotten about. It was exciting to see how lessons had clicked and stayed with him over the years.

What are you most proud of?

I’ve led two schools in the ReNEW network over the years, and I’m really proud of the culture we built at both schools. We know that academics are obviously incredibly important, but it’s not our only charge—especially now. A young adult can get through the world without knowing Algebra 2, but they can’t find real success without understanding how to have agency or deal with frustration or reflect, and it’s important to build a school that ensures that kids and adults focus significant attention on those skills.