Inspiring the Next Generation of Corps Members

Years after their lives were touched by Teach For America corps members who served as their teachers, a second—and now, even third—generation of students are following in their footsteps.

During the annual It Takes A City event in New York in May, hundreds gathered to celebrate the alumni, corps members, and advocates who impact the lives of nearly 100,000 New York City students each year. Among the social innovators presenting was the co-founder and CEO of Kinvolved, Miriam Altman (New York ’08), who shared a story about a particular class she’d taught ten years previously that inspired her to launch her ed-tech company, which provides tools and services to reduce absenteeism. After her talk, she ran into Ruth Frias (New York ’16), a second-year corps member, who had been a student in that very class.

When you run into your former student, who was part of the class that inspired you to co-found your company @TFANewYork #ItTakesACity - and NEITHER of you know the other was/is @TeachForAmerica Corps Member. SO PROUD! #allthefeels #fullcircle @Kinvolved pic.twitter.com/EWE2nSSMJ7

Raised in the Bronx by a single mom from the Dominican Republic, Ruth attended high school in Manhattan, where Miriam taught Global History.

Ruth remembers how, during her sophomore year, Miriam always managed to make her class engaging and maintained high expectations of all her students.

Ruth never realized Miriam was a corps member—or that TFA even existed—until she was a junior at Hartwick College when a family member who taught with the corps in Memphis suggested Ruth apply for an internship as an operations associate at TFA’s regional institute.

At her small liberal arts college, Ruth struggled to keep up with the basics that her peers—most of whom attended private schools—already seemed to know. Looking for a change, Ruth jumped at the opportunity offered by the internship. 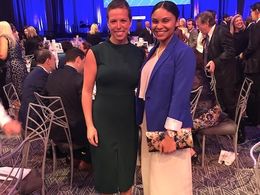 “I’m trying to give back to my people and community,” Ruth says. “In the corps, I realized that it is not only going to take teachers but a movement of people to make a difference.”

Recalling her first experience of TFA, Ruth says, “I immediately fell in love.” While in Memphis, however, Ruth also saw that the inequity she faced as a student went beyond just her own community and city. “Once I realized I was one of the students denied a quality education through no fault of our own, other than our ZIP codes, I couldn’t turn back, so I went back to college, switched majors, and joined Teach For America,” she says.

Today, Ruth teaches fourth- and fifth-grade science, five blocks from where she grew up in the Bronx. After her two years of service end, Ruth will attend Brooklyn College in the fall to study the recruitment of minority educators—a demographic vital to students in low-income areas yet, historically, difficult to retain in the classroom.

“I’m trying to give back to my people and community,” Ruth says. “In the corps, I realized that it is not only going to take teachers but a movement of people to make a difference.”

What these second- and third-generation educators represent is a new future of leaders and a growing scale and diversity within the TFA network, one that’s driving learning, innovation, and collective leadership further.

To transform a deep-rooted, unequal system and create generational change requires a widening coalition of leaders, including those people directly impacted by the issue. People like Ruth, who are inspired and determined to give back to the city and neighborhood that helped shape them.

Matt Westmoreland (Metro Atlanta ’10), a Princeton University graduate and Atlanta city councilman, returned home by way of TFA in 2010 with the goal of providing kids in his the community the quality of education that opened doors of opportunity to him years ago. 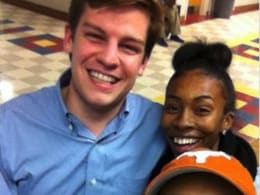 Matt Westmoreland (Metro Atlanta ’10), a Princeton University graduate and Atlanta city councilman, returned home with the goal providing kids in his the community the quality of education that opened doors of opportunity to him.

“The incredible work she did and the impact she had on kids at school left a big impression,” Matt recalls. "One evening, in the middle of the season, we started talking about how she came to our school through this program called Teach for America, and it stuck with me. So, I applied during my senior year of college and was fortunate to get placed back in Atlanta Public Schools.”

Matt taught history at Carver Early College High School, one of the highest-performing schools in one of the lowest-income communities in Southeast Atlanta. Unlike Miriam and Ruth’s school back in the Manhattan, Carver had a large TFA presence with many corps members staying beyond their two-year commitment.

After four years in the classroom, Matt went on to serve a four-year term on the school board before his starting career as a council member.

Since then, four of Matt’s students have gone on to join the corps, representing the third generation of corps members, leaders inspired by Matt just as Maron inspired him. Recently, he helped two former students prepare for their interviews. “We talk through their resumes, sample teaching lesson—everything—you name it,” Matt says. 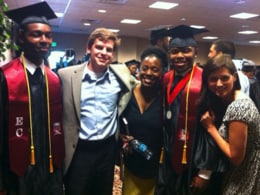 A Princeton University graduate and Atlanta city councilman, Matt returned home with the goal of providing kids in his the community the quality of education that opened doors of opportunity to him.

For students-turned-corps members, it is this kind of support that creates a sense of possibility and inspires them to have a similar positive impact on others. “The relationship has given me inspiration, guidance, and assistance,” Andre' Reaves (Nashville ’17) says of Matt.

A third-generation corps member, Andre' recently joined the corps in Nashville after three years as a college adviser in Atlanta. “It was alarming to me how many of the students I served had a negative experience with their teachers. Hearing stories of teachers degrading [their students] and seeing the confidence of my students welter was enough for me. After two years in college access, I finally made the decision to give the classroom a shot.”

Third-generation corps member Shanice Farmer (Metro Atlanta ’17) also credits Matt—her TFA mentor—and others at Carver with her decision to become a corps member in Atlanta, where she now teaches sixth-grade social studies. “They had a passion for the students and were excellent teachers, but more than this, they were role models, who pushed me to attend and finish college,” Shanice says. “I decided to join TFA because I wanted to be the change in my community and leave an imprint on youth.”

For Matt, watching former students go into the classroom is both transformative and exciting. “It’s an incredible feeling,” he says. “It speaks to the work TFA and its network is doing to transform schools and communities on a lot of different levels, not just in Atlanta but across the country.”