Alum Katie Morgan (Indy ’10) invited us to visit The Excel Center West, Goodwill’s tuition-free adult high school, where she shares her journey on transitioning from journalism to teaching. 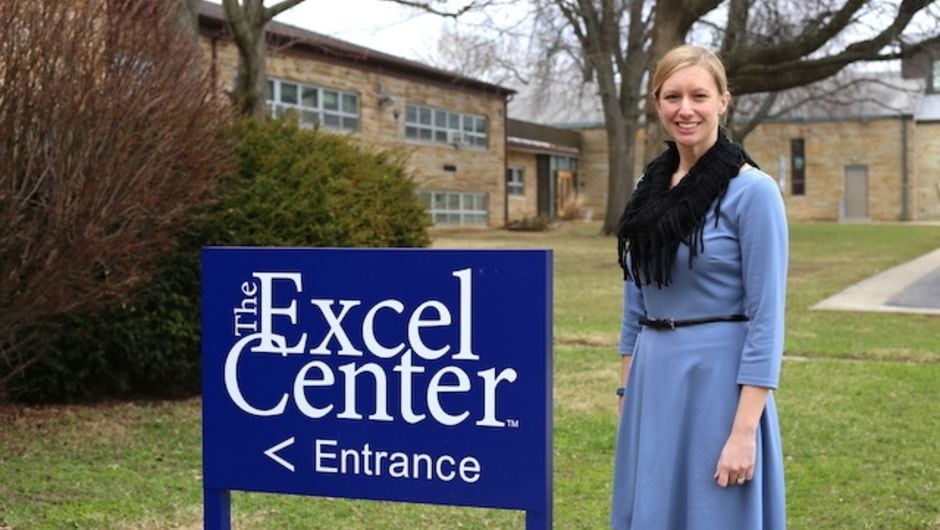 What do you enjoy most about your role as the director of The Excel Center West?

My favorite part about the job is development. I get to develop our staff members, support our team in getting better at their roles, and help them figure out their long-term careers. I also love developing our students. We see students come in who might have tons of barriers or might not have had success in school in the past, and I get to lead our team in supporting them and helping remove those barriers so that they become confident and grow in themselves. 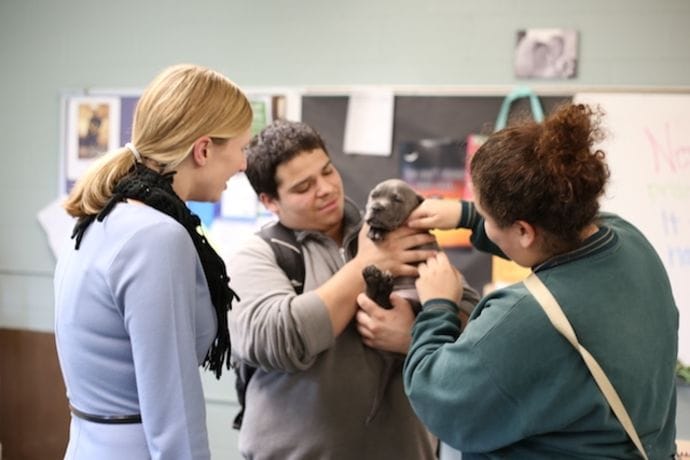 Katie at The Excel Center West with students.

I’ve worked in a couple different places doing various things, and it’s so clear here at The Excel Center West that we’re living and breathing the mission we say we are – we say we want to get adults a high school education so that they can be economically self-sufficient, and everything we’re doing is truly geared towards that. Goodwill’s mission is: “Goodwill changes lives every day by empowering people to increase their independence and reach their potential through education, health, and employment.” We focus on the education side into employment, and we’re truly committed to that overarching mission.

Why do you think tuition-free high schools for adults are a critical component of our Indianapolis education community?

Research shows that if a student has a parent who holds a high school diploma, the student is 50% more likely to graduate. By educating adults, we’re in turn educating parents, who are able to have an impact on their kids’ education. While we look at helping individuals earn a high school diploma, enter college, and get a job, we’re also looking at the two-generation impact – everything we’re doing to support these adults helps, in turn, the kids.

The other really important piece is the need. Here in Pike Township, there are over 5,000 individuals who are over the age of 25 and don’t have a high school diploma. In Center Township, that number is almost 25,000, about 25% of the adult population. 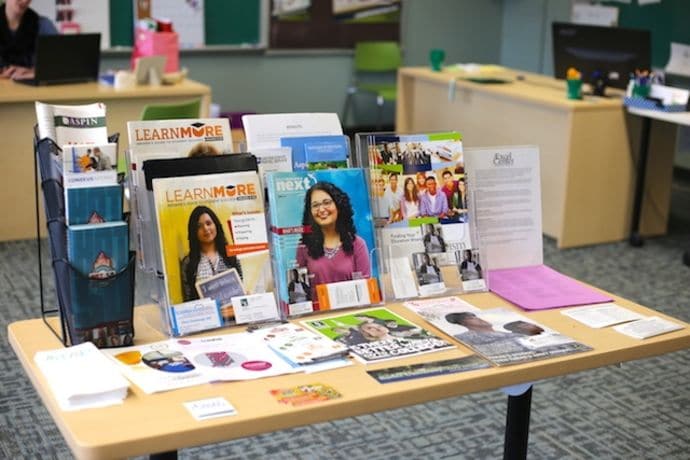 Resources for students in The Excel Center West's administrative office.

There are lots of people without a high school diploma who don’t have access to as many jobs or can enter college. The Excel Center West is creating a pipeline for individuals to enter the workforce and not rely on government funds. They’re able to be economically self-sufficient and fill many middle-skill jobs that are in need of being filled.

Before you joined the corps, what did you imagine your career trajectory to look like?

For my entire life, I thought I was going to be a journalist. Everything I was doing was geared towards news and writing, something in the communications field. I was the editor of my high school newspaper and had a public access TV show for which I did the news once a week. And in college, I wrote for my college newspaper and was the news director for our radio station.

Around the end of my sophomore year, I was taking a TV class. As I was lugging around the giant camera, I realized I didn’t enjoy the technical side as much as the writing aspect. I was also coaching swimming and volunteering at the time and began to develop a love for working with kids. I started questioning if I would feel totally fulfilled through journalism long-term. It was something I loved to do but I wanted more, which is how I started thinking about becoming a teacher. I went to the education office and started to look at what it would take to change my major – they said four more years of school, and I was already halfway done. Soon after, during my junior year, is when I found out about TFA. I met with a recruiter, looked more into it, and got really interested. TFA came at the right time.

“Here in Pike Township, there are over 5,000 individuals who are over the age of 25 and don’t have a high school diploma. In Center Township, that number is almost 25,000, about 25% of the adult population.”

You were on the founding team for Excel Center West in 2013. What did you feel and experience as a founding staff member?

I came on as the college and career readiness counselor. The school was just opening, and we did a lot of boots-on-the-ground work for student recruitment. We knocked on doors, passed out flyers, held a block party to draw interest, and did many things I wasn’t expecting to do for the first month or two. But it ended up being such a positive experience because as a team, we realized everyone’s position was important. There wasn’t any sort of “I’m too good to put my tennis shoes on and ride the bus to find students” – everyone did it, and it created a sense of team unity. In the process of founding or starting a new school, there are so many things to figure out and many road bumps. But if you can have a really strong team, it’s going to make your school even stronger.

How did TFA-Indy play an integral role during and after your corps experience?

I felt really lucky to be a part of a cohort of corps members that were having the same experiences and partnering with me throughout the whole experience. We’d go to class together on Tuesdays and Thursdays and all get dinner afterward to talk about class and the school day. We worked through the pain together, the joys together, the silly stories together. That helped make being a first-year teacher that much more manageable. I think all first- and second-year teachers go through a lot when they’re learning and planning their practice. Having that cohort helped me feel confident and ask questions in a safe environment. I didn’t feel like I needed to be timid because I had this group to support me. 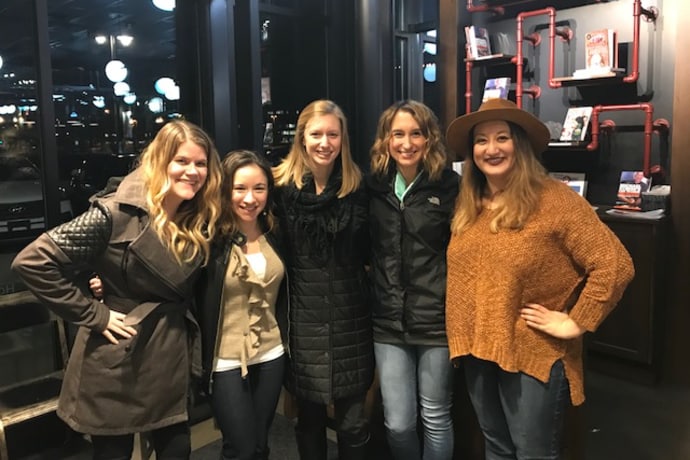 At George Washington in particular, where I was placed during the corps, I got to co-teach with an alum in her third year of teaching, Felicia Sears (Indy ’08), and also work alongside three other corps members, Ashley Sciacca, Vicki Ketchum, and Alaine Sims. Having a bunch of people in the same position as me helped me in bigger school meetings, and we had professional learning communities every day as well.

When I was transitioning to The Excel Center West, Brennen Humphrey, a fellow 2010 alum, was a huge support. She had worked for The Excel Center Michigan St. for two years as a corps member, then transitioned to the Anderson center, and was coming to West to be a lead teacher. I didn’t know she was going to be joining the West team until I saw the position and reached out to her to learn more. She had rave reviews and so much positive things to say about The Excel Center.

Being part of TFA is so inspirational because you get to see other alums go out and try different things. That gave me confidence that I could become a school administrator.

You’re from Cincinnati but chose to stay in Indianapolis. Can you describe some differences between these two urban Midwestern cities?

I love Cincinnati. It has more of a neighborhood feel, with lots of little neighborhood. Indy has its neighborhoods as well, like Mass Ave and Broad Ripple, but feels more "one." I’ve lived in Broad Ripple and on the south side of Carmel, and I can ride my bike from up there to downtown to go to Indy Eleven games, to Mass Ave, or even ride north to the arts district in Carmel or to Butler. The fact that I can so easily get around by riding a bike feels so connected. Even though it’s bigger than Cincinnati, there’s something about Indy that feels smaller because everything is so accessible.

Someday I might move back to Cincinnati, where my family is. But there aren’t opportunities in Cincinnati as there are here. Here, I got my master’s in education administration at Butler, have such a great cohort, and had an incredible TFA corps experience. There are so many things I have the opportunity to do that I wouldn’t have if I were in Cincinnati.

What advice do you have for current corps members? 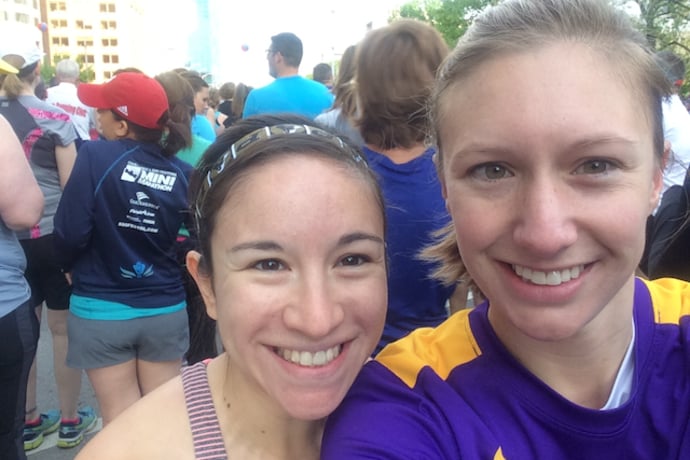 Katie Morgan with alum Felicia Sears at a mini-marathon.

Get connected with your fellow corps members but also find ways to put down your roots here. Find ways to get involved with corps members outside of teaching. If you’re passionate about running, do the Run317 races. Circle City Athletics, where I did intramural kickball, helped connect me to people and give balance to my teaching life, something that kept me in Indy other than my job. The city has so much to offer. You just have to take the risk to search it out.