Alumna Caitlin Hannon (Indianapolis '10) talks about Enroll Indy—a streamlined enrollment system for students and families—and about how she became personally invested in expanding equitable opportunity for all children. #OneDayINdy 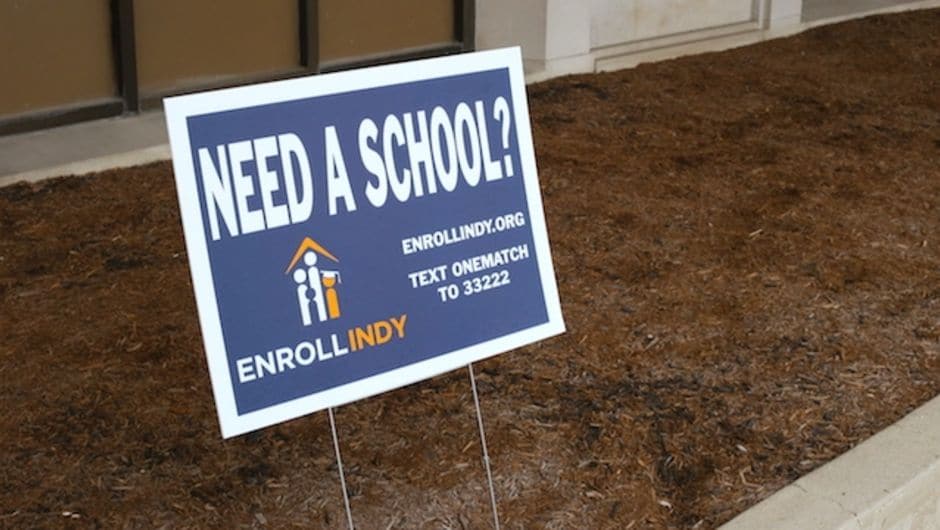 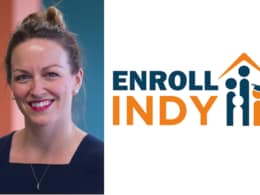 In 2015, alumna Caitlin Hannon received an Education Entrepreneur Fellowship from The Mind Trust to found Enroll Indy, a streamlined enrollment system for students and families to learn about and apply to Indianapolis schools of choice. Enroll Indy operates School Finder, a program that shares real-time information on 114 public neighborhood, magnet, and charter schools in Indianapolis. Last year, it also launched OneMatch, a one-stop application that lets families apply to up to 10 schools and get matched to one school for the 2018-19 school year. Approximately 8,500 students used Enroll Indy this year.

In addition to making the school choice application process more equitable, Enroll Indy is working wonders for teacher mobility, enrollment projections, and school transparency. Caitlin sat down with us to chat more about the organization’s background, goals, and multi-faceted impact.

On your website, you share that it was “a group of Teach Plus teachers who first called for unified enrollment in 2013.” Can you speak more to that?

In 2013, a group of Teach Plus fellows wrote a paper about teacher mobility in Indianapolis. Of more than 500 teachers surveyed, 53 percent shared they moved from their school by their second year of teaching, of which 78 percent were involuntary moves. Eighty-five percent of them reported that they made at least one move by their fourth year. I had experienced this as well during my corps—I taught 11th grade my first year then was displaced to another school to teach 7th grade my second year. 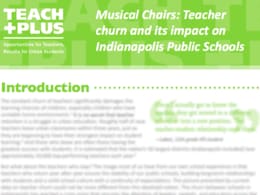 In "Musical Chairs: Teacher churn and its impact on Indianapolis Public Schools," Teach Plus fellows discuss the issue of teacher mobility in Indianapolis (2013).

The point made was that this was not a good early-career experience. Relationships and professional development were interrupted, which was not only unhealthy for teachers but for kids. We tried to figure out the root cause and met with the school district about why displacements were happening so often. The district shared that they were finding it difficult to anticipate how many kids were going to show up for the school year. Staffing was based on enrollment projections, but at the time, the number of charter schools was increasing, making projections more difficult. A student may be at Arsenal Tech one year, then also apply to other charters—which would mean that each of those schools would be planning for a kid who may or may not show up. If we had everybody’s data in the same system and knew their rosters, we would be able to anticipate enrollment conflicts and plan better.

As a next step, we brought together stakeholders in 2015, doing interviews and focus groups with parents and external organizations. We heard parents saying, for example, “I just moved here and have a kindergartener. Should I just walk into the closest school? How do I know the rules?” We have all this school choice, but a low-income single mom may have a vastly different experience than a two-parent household that has connections with information about all the policies and deadlines.

For me personally, that became a very clear problem statement of what we could make better. Other cities like Newark and Denver were already facilitating a more streamlined process for kids that provided better data and helped inform students and parents about choice. This was a problem that I wanted to try to tackle. As a result, I decided to leave the school board and Teach Plus to launch Enroll Indy.

In what ways does Enroll Indy ensure equitable practices throughout matching and enrollment?

“What was a very opaque system that benefited those who knew how to get the right resources and connections became more transparent, ensuring everyone’s chances to get into schools of choice were the same at least in terms of accessing an application that’s simple and straightforward.”

Schools in our system still 100 percent control class sizes. Their rules can be different in terms of lottery preferences (for example, ensuring siblings attend the same school), and all these rules are built into an algorithm. The algorithm we use was build by a Nobel Prize winner in economics—Al Roth, professor of economics at Stanford. He’s also written algorithms for the National Kidney Matching Exchange, Match.com, and other major systems. The way it works isn’t like Amazon or Netflix, where it “recommends” schools to students and families based on fit. We don’t do anything like that—it’s just to match. It never places a kid in a school they didn’t apply for, and it’s is entirely driven by choices that parents make in the application process. 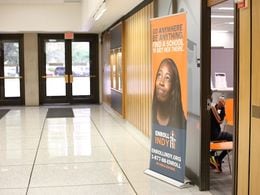 Prior to Enroll Indy, there was nothing to ensure equity or transparency. We published a 27-page policy manual with all the rules of the system. It was the first time that all the rules were in the same place. By nature of what we do, sometimes it sounds complicated—but it was way harder before, because the rules were so hard to find. A family could walk into a school and be told the school had no room for another student, then have their neighbor’s kid get a seat the next day and not know why. There was no recourse, monitoring, or neutral source on schools. Nobody was tracking the data around movement—or keeping schools accountable for things like Count Day funding.

Now, we have real-time insight into equitable practices for schools. What was a very opaque system that benefited those who knew how to get the right resources and connections became more transparent, ensuring everyone’s chances to get into schools of choice were the same at least in terms of accessing an application that’s simple and straightforward. It doesn’t matter who you are – you’ll have an equal opportunity.

I’ve spoken to other cities who implemented similar enrollment programs. Denver shared that there was one year when the children of their director of enrollment and two city councilors didn’t get into their first choice schools. In response, they said, “Yes, this thing is really working!”

How did you personally develop an interest in pursuing education – especially, expanding equitable opportunity for all students?

Policy and government was interesting to me. I believe in effective government and don’t believe in limiting the government. I struggled a lot seeing programs that were driven towards adults I felt that the system failed. For example, many adults who go to failing schools don’t get access to opportunities—then they have to be supported by the government in the long run and are expected to turn their life around at age 40. Why weren’t we getting them at 3, 4, 5-years-old so that we don’t need those support programs later in life when things are harder to change? 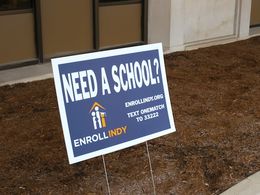 One of several yard signs advertising Enroll Indy outside of the IPS central office building.

I understood that education was the root of long-term systemic change; I think kids are a lot more open to change. If we exposed kids to opportunities that they wouldn’t otherwise have in their neighborhoods, it opens up a whole new world of opportunities to be more productive and to give back to their communities, rather than to not have a chance to be bigger than they are. Education was the place that made most sense in implementing long-lasting impact.

You’ve had a diversity of experiences—starting with doing policy in New York's Lower East Side schools, followed by joining the corps to teach, serving on the Indianapolis Public Schools school board, leading Teach Plus, and now heading Enroll Indy.  How has your view of education changed over the course of these experiences?

Over time, I’ve realized how complex education is. It’s easy to be an armchair or sideline critic, saying it’s easy to do X, Y, Z and simplify the problem.

If politics weren’t in the way, we could do right by kids. Until you get into different seats in the system and understand the different perspectives, it’s really hard to develop a sophisticated understanding of how to create change. Teach For America has helped afford me that understanding. From my time in the classroom to policy, I didn’t even think about that until I was in a classroom and realized that the people who were making systems-level decisions about education weren’t in the classroom. I thought, what was my path to become one of those people?

“Until you get into different seats in the system and understand the different perspectives, it’s really hard to develop a sophisticated understanding of how to create change.”

At Teach Plus, we worked with people in the classroom to help them shake policy. We helped teachers, with their ground view, understand what was happening at the 30,000-foot level. It provided me an opportunity to really understand the interconnectedness of my teaching experience, governance on the school board, and now mid-level experience executing on a specific area of education. That’s the takeaway—to get exposure to various levels of education and to a diversity of people who experience the problems differently. It makes me feel more capable of tangible, practical solutions than when I started. Having classroom and policy experience, I have a more nuanced view of the change that needs to happen.