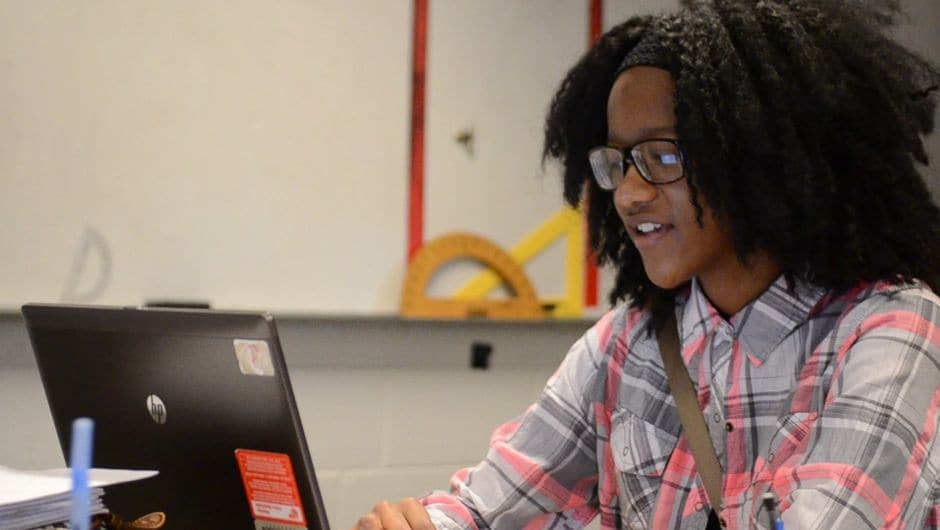 RIVERDALE--Tatiana Jones is entering the 2016-2017 school year without animus against taking math in her last three years at Riverdale High School. But the rising eleventh grader’s attitude has not always been blithesome towards the subject, and she credits her tenth-grade math teacher and dance team coach, Jacqueline Sims, for helping her make the paradigm shift in a healthy school culture.

“I now like math. I didn’t like it before because some teachers didn’t explain it well enough for me to comprehend it,” said Jones. “But now since being in Ms. Sims’ class, it has become better for me.”

Tatiana, and other students, came after school at least three days a week to receive tutoring from Ms. Sims, a Teach For America – Metro Atlanta corps member. Efforts like these from dedicated teachers, help increase math achievement points on the Georgia Career and College Readiness Performance Index, which measures school improvement and accountability for state schools.

“The tutorials helped because Ms. Sims would go to the board, we would go over problems that we went over in class, or she would find worksheets that look similar. And she would break it down.”

The results on the Georgia Career and College Readiness Performance Index (CCRPI) are encouraging. By working in partnership with both TFA and non-TFA teachers across the school, the percentage of Riverdale’s Geometry-Proficient students grew 8.1% over this past year. This contributed to the school’s improving CCRPI scores as Riverdale ranks in the 44th  percentile in Georgia for 2015 compared to a 16th percentile ranking last year.

Sims, who practiced family and juvenile law for three years prior to joining TFA, says her passion is rooted in producing successful students.

“I teach because I see our students really need teachers that care,” said Jones.

Sims says the increase in scores was a team effort—from those such as principals, security officers and also support from the TFA-Metro Atlanta regional team.

The school’s administration also strongly believes the high academic growth is closely tied to Sims’ contribution to school culture. Sims is a sponsor of the school’s dance team, where Tatiana is also the team’s manager. Tatiana states she really enjoys participating in the extracurricular activity, as a strong positive supplement to her course studies.

The school’s principal, Jamille Miller-Brown, says Sims and other TFA corps members and alumni within her school strongly impact a positive school culture, while also aggressively pursuing high achievement from their students.

“They have a good work ethic. They are very professional, receptive to criticism and they want what’s best for the students and that is consistent across our TFA teachers,” said Principal Miller-Brown.

However, Miller-Brown says there is still a lot of work needed to improve overall CCRPI achievement at the school. Riverdale’s overall CCRPI score of 72.2 falls below the statewide average of 75.8.

“We are taking steps to go in the right direction and we are excited about that,” said Miller-Brown.

In the meantime, Tatiana is taking what she learned last year and her renewed pride in math achievement to reach her graduation day in 2018.