I Paved My Own Road To Harvard. Now I Do It For Students.

Gabriel Fotsing (Mississippi '10), whose nonprofit has connected students from low-income neighborhoods with an astounding $15,000,000 in college scholarships, knows the obstacles they face all too well. 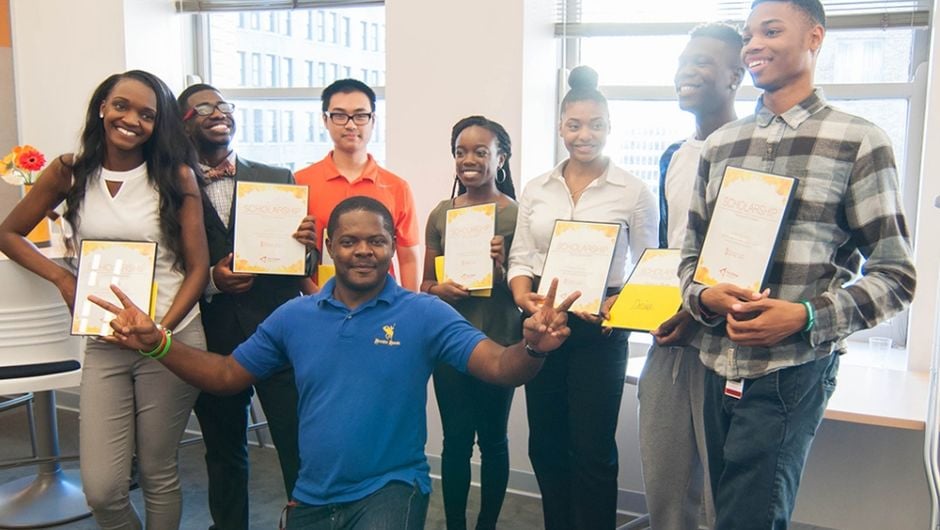 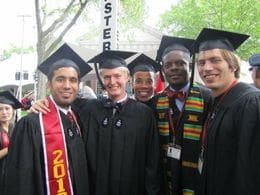 Fotsing (fourth from left) has displayed a resourcefulness throughout his life that has carried him from Harvard to TFA and now, The College Initiative.

Gabriel Fotsing (Mississippi ’10) is the epitome of the American Dream. He holds an undergraduate degree from Harvard, and has parlayed that into a successful nonprofit that provides scholarships for students to realize their dreams of going to college.

If you look at his résumé, it would be easy to assume that he comes from some well-to-do, established family. However, Fotsing’s road to success was not paved for him; he laid almost every brick himself.

“I had dreams of attending college when I arrived in the United States before my eighth-grade year in Houston, but there were two problems,” he remembers.

The first was that he didn’t speak any English; the second was that paying for higher education would be an uphill battle for his parents, newly immigrated from Cameroon and living in a low-income neighborhood.

“I worked really hard in school, reading everything I could to absorb the language as fast as possible,” he recalls. “After school, I practiced my grammar and picked up vocabulary anywhere I saw an opportunity—even episodes of ‘Scooby-Doo.’ It worked.”

And the second barrier?

“My language obstacle was gone by the time I was a freshman in high school. I went to the public library and looked up the various scholarships that were available for me to apply to,” he says. “From there, I constructed a game plan for the next three years, and that’s how I was lucky enough to go to Harvard and pay for it with a scholarship.”

After graduation, Fotsing joined Teach For America as a corps member at Lee High School in the Mississippi Delta. “With my background, I wanted to go to an environment where I could have the biggest return on impact,” he says.

Drawing on personal experience, he started The Trust, a program that mentored students navigating the college application process to help them earn a staggering $900,000 in combined scholarships. His ingenuity also came into play when he collaborated with the Clinton School of Public Service to secure grants to fund college visits and raised $46,000 in donations to take 10 students on an educational field trip to France.

Today, the Trust has evolved into The College Initiative, a nonprofit that now serves over 1,000 students nationwide. Despite a median household income of under $24,000, a full 100 percent of students in the program have been accepted to over 200 colleges and have been offered a combined $15,000,000 in scholarships for the 2015-16 school year.

One of them was Mike*, a DACAmented high school senior in the classroom of Manny Macias (Los Angeles '13). Mike is currently a freshman at UC Berkeley after The College Initiative guided him toward earning a financial aid package that would help him pay for tuition.

The key, Fotsing says, is offering students personal one-on-one assistance in comparison to schools that often have 1,000-to-1 ratios for overworked counselors.

“These are issues I saw where I grew up and where I taught, and Teach For America teaches you how to lead,” he says. “Once you manage a classroom, you can manage any situation and know what to prioritize.

“And on top of that, being able to tap into the expertise of the TFA network has helped us tremendously. I’ve met TFA alumni over the years who have helped with fundraising and growing our internal infrastructure so we can expand across the country to serve as many kids as we do. For that, I am very, very grateful.”

“Teach For America teaches you how to lead.”

The College Initiative is now in the middle of a five-year plan aimed at expanding in Houston, Atlanta, and Los Angeles. Cultivating the next wave of the educated American workforce has become Fotsing’s life’s work, and he gets daily reminders of the influence he’s had in people’s lives.

*Mike is a pseudonym.