How Could You Not Love Ms. Schulz?

A Student of the Year shares how her school’s Teacher of the Year helped her find her voice, plan a school walkout and exercise her First Amendment rights. 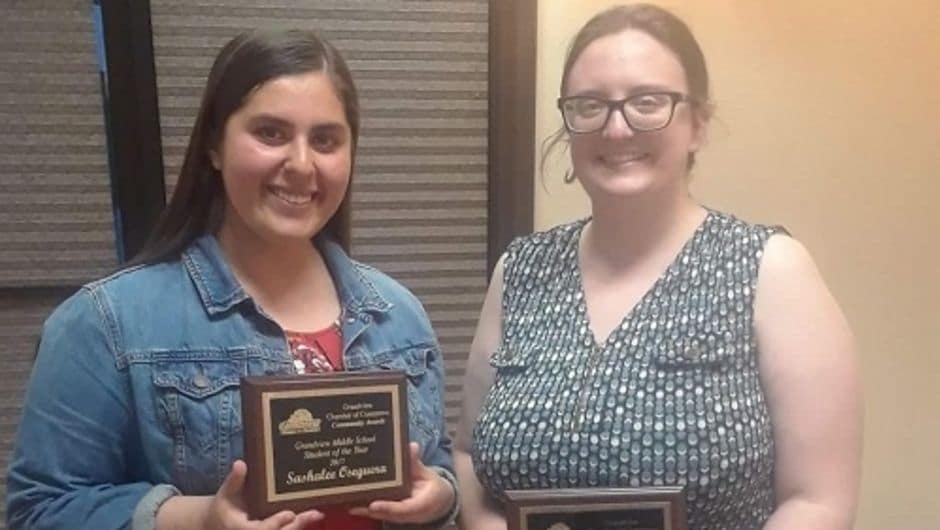 For the third time, a Teach For America alumna has been recognized as Employee of the Year at Grandview School District school. But this year winner Erin Schulz has something extra to be proud of. One of her students, Sashalee Oseguera, was honored as Student of the Year based on projects they worked on together to address some of the biggest crises facing our nation.

We want to give Ms. Schulz some props. She grew up on a sheep farm about two-and-a-half hours away from Grandview and was a member of our second corps in South Central Washington. She joined us after studying education at Macalester College in Minnesota. That program emphasized urban education, and she wanted to give the same energy and attention to rural students via Teach For America.

In the past four years, Ms. Schulz has taught English language arts to sixth, seventh and eighth graders, as well as journalism and an AVID college preparation course. We could rave about her work—but instead, we are going to turn over this space to her award-winning student, Sashalee, to explain her award and how Ms. Schulz inspired it.

Congratulations on winning Student of the Year! When Ms. Schulz nominated you for this honor, she said you are a student who went from asking “How can I help,” to deciding how to help others and leading the efforts. Can you explain that transition?

On Valentine’s Day of 2018, one of the largest mass school shootings occurred. The lives of 17 students and staff members were lost because of a 19-year-old former student of Marjory Stoneman Douglas High School, Nikolas Cruz. That day I had got home from school and looked on Twitter to find it flooding with news about the tragedy. My heart sank. I wanted to know how it happened, who did it. I read so many articles that night about what happened, and even watched videos about the survivors' experiences. It was then that I became aware of the problem of lack of gun control in America.

Days after the shooting, survivors like Emma Gonzalez started speaking out and protests were being organized. I wanted students at my school to be a part of this, to be a part of something greater than themselves, but I wasn’t quite sure how to lead such movements. For means of support and advisory, I went to Ms. Schulz and Ms. Wilson, my history teacher, to share my thoughts about leading a walkout, the same walkout that would happen nationwide on March 14th. Together we planned a meeting that I hosted and a classroom full of students ended up attending. During this meeting, we discussed how to plan a safe, peaceful, and quiet walkout, and the reasons why we were walking out.

To further this organizing, a couple students and I wanted to have a meeting with the principal, Mr. Heinle, to talk about the plans for the walkout. Once we had the meeting, he told us he would discuss it over with the superintendent, Mr. Strom. They decided to say yes our plan. Throughout this, I asked Ms. Schulz how I would be able to contact some news stations so that what we were asking for could be heard throughout the Lower Valley. She told me that I should try to contact them through Facebook, so that’s exactly what I did, and was successful in doing so.

It makes me so happy to say that the walkout was very successful and in fact, many walkouts over the country were successful. Two-thirds of the students at GMS ended up walking out. Leading the walkout gave me confidence in the future. It also gave a lot of students reassurance that our voices—and what we believe in—matter.

Before you organized the walkout, you also participated in a supply drive for students affected by a hurricane in Texas. Why do you think it is important for students to participate in such efforts?

I strongly believe that it’s crucial for students to be involved in events like this because doing so sets them up for the future. I can’t stress enough how important I believe being involved in the world is. Whether that’s helping communities or using our First Amendment right to try to ensure the safety of children and teens in schools. Young people need to see that they can be heard and that they can make a difference; that their opinions matter. In a few short years, our class (class of 2022) will be able to vote, to finally do something that we currently can’t and I want today’s students to know that they should be involved in decisions concerning this country we call home.

The same day you won the Student of the Year award, Ms. Schulz won an Employee of the Year award thanks to her advocacy for students. Your principal said she helps amplify the voices of students who may not otherwise be heard. How do you describe Ms. Schulz? What’s something you’ve learned from her?

If I could describe Ms. Schulz in one word I think I’d have to choose “amiable.” She does nothing other than radiate the definition of the word; she’s always glowing with kindness, warmth, and friendliness. She’s one of those people that everyone loves and can go to for support. I honestly don’t know how anyone could ever have any hate in them for her because it is like, How can you not love Ms. Schulz? Everyone one receives help from her if they ever need it, emotional and academic help. During these past two school years, I’ve seen her comfort students countless times and people have told me she’s been there for them, and she has also been there for me.

One thing I have learned from Ms. Schulz, besides all that she has taught me in AVID and in English language arts, is to put myself in other people's shoes. A question I constantly ask myself is “Why do people act the way they do?” She’s always explaining how there are different ways to see things. I guess what I’m trying to say is she showed me how to empathize instead of sympathizing, which is a trait I’m glad to have acclaimed because it has allowed me to understand others.