From the beginning, part three: Corps members share their first year of service

An interview with Whitney Owens (Idaho ‘21) 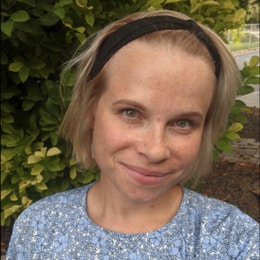 Over the course of the 2021-22 school year, Teach For America Idaho has featured interviews with two entering corps members, to track in real time how their experience is progressing as they begin their teaching careers.

The first interview with Whitney Owens took place shortly before the school year started. You can read it here. The second interview below took place in January, after Whitney had completed her first semester as a TFA corps member and had some solid experience upon which she could reflect. Read that piece here.

This third interview was conducted shortly after the school year ended.

Whitney teaches third grade at Centennial Elementary School in Nampa but will be teaching fourth grade at a different school next school year.

Whitney was born in Idaho but spent most of her childhood in Virginia. She moved to Boston after high school and attended Bunker Hill Community College. She transferred to the University of Massachusetts' Boston campus, where she received an associate’s degree in foreign language and theater. She then received a full scholarship from Berea College in Berea, Kentucky. She graduated with a degree in peace and social justice.

TFA: When we spoke in the winter, you discussed how the impact of COVID on your students was much stronger than you might have anticipated in terms of their behavior and academic preparedness. How did that change in the second semester?

Whitney Owens: It has improved. Overall, I saw them ease into their role as students a bit more, and to embrace and accept the expectations and rules and policies. They settled into making the right choices. And as a teacher, I got better at managing confrontation.

I started a few procedures that helped a lot. For example, if a student was starting to misbehave, I would send him or her to the teacher next door and that teacher would get the student to start doing their work. She was just trying to make sure I had extra help as a first-year teacher. And I had some pretty defiant students.

TFA: You also said during our last conversation that you were starting to do more intensive intervention work with students who needed it, even if that meant not always following the curriculum to the letter. How did that go?

Whitney: I did put emphasis on creating more enriched learning with extra resources. I used some second-grade materials. I brought in videos and different things to help the students to gain background knowledge and I wasn't so focused on just sticking to the regular curriculum. And I started to focus on bringing more engaging activities into my lesson planning, which also helped the students to engage in their learning and to have fun with it.

TFA: What kind of results did you see?

Whitney: We were using a program called Lexia Core5, that targets where the students are and what skills they need. We just honed in on using that app as a reading intervention. My kids were motivated to be the top achievers at the school. I had it on the board: “Let's be the Lexia Core5 top achievers.

Even the one kid who was behaviorally defiant consistently got into this activity and his reading grew about two levels. He went from low first grade to the middle of second grade with his reading. Overall, by the end of the year 79 percent of my students were at or near grade level in reading. At the start of the year, it was just over half.

TFA: Post-Covid, you cited behavioral issues as a major challenge. You even referred to student interactions early in the school year as like ‘Lord of the Flies.’ How would you say student behavior changed over the second semester? What kind of improvements did you see?

Whitney: It did a 180-degree turn second semester. A majority of the time, it was not ‘Lord of the Flies.’ It became the opposite. Some students had gotten medical interventions, which helped a lot. I also used knowledge from my first semester of education classes at Boise State University, at BSU course that Teach For America requires, and I had learned from my professor about non-verbal commands. I also had district training about using visual cues, because our students have a stronger visual cortex, having been surrounded by visual media their whole life.

The science behind it is that you're not inundating people who are audio sensitive with too much verbal information. You're still giving kids the information that they need, but visually instead of verbally. It helped calm the class environment.

I also implemented a class jobs procedure. This helped the students realize that they were part of a community. Having the responsibility towards the classroom I think, also manifested in being more respectful of their environment.

TFA: Another of your stated goals was to build resilience in your students. Looking back, how did that go over the course of the school year?

Whitney: I put a lot of focus on helping them to build on a few goals and that was supported. through the positive behavior intervention at our school. Building resiliency for my students was evident through those goals that we set. Meeting a goal meant getting a prize. We also did a lot of working on showing respectful behavior and trying to be independent with their work.

Positive, respectful, independent, dedicated, engaged, were the parameters we were hoping to observe in our students. I repeatedly talked about them, and we had a lot of discussions about what each of those terms means.

TFA: What do you realize now that you thought you understood going in, but actually knew nothing about? In other words, what didn’t you know that you didn’t know?

Whitney: I had no idea how small things need to be in place to help manage your classroom. I used to be a school bus driver, so I thought I understood how to manage behavior. But that’s such a limited time compared to being a teacher.

If you have a good plan going in for how you would handle situations, that's going to be even more valuable than knowing all of the content or whatever you're wanting to teach.

TFA: What are your biggest hopes for next year?

Whitney: I will be in a place where I can freestyle somewhat with my lessons, bringing in alternative materials, providing my students with access to different kinds of reading materials. I will be able to target the visual-learner students based on what their needs are. I’ll be able to attempt interventions on my own. I’m excited for next year.