From the Beginning: Corps Members Share Their First Year of Service

An interview with Whitney Owens (Idaho ‘21) 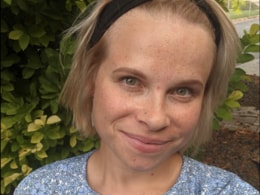 Over the course of this school year, Teach for America Idaho will feature several interviews with three entering corps members, to track in real time how their experience is progressing as they begin their teaching careers.

The first interview took place shortly before the school year started, and focuses on the corps members' backgrounds, their hopes and fears as they anticipate taking responsibility for a classroom filled with students for the first time.

Whitney Owens was born in Idaho but spent most of her childhood in Virginia. She moved to Boston after high school and attended Bunker Hill Community College. She transferred to the University of Massachusetts' Boston campus, where she received an associate’s degree in foreign language and theater. She then received a full scholarship from Berea College in Berea, Kentucky. She graduated with a degree in peace and social justice.

TFA: Tell us a bit about your background and how you came to TFA Idaho.

Whitney: I was married and had a son when I graduated from college, so I was a stay-at-home mom for a while. Then I became a school bus driver, and I really loved that, being able to have an impact on kids’ lives. Be there for them in the morning, talk to them in the afternoon and see how their days went.

Then, in 2019 I had to pretty much flee my ex-husband. Since my family still lives here, we drove out here from Kentucky. I had to rebuild my life from scratch. I worked here in Idaho for two years as a school bus driver.

My grandparents and some other people in my life kept saying, ‘I really think that you would be a great teacher.’ And so I started to listen to them. About a week after my divorce became final (in the spring of 2021), I got this almost spiritual message telling me ‘you need to look online right now.’ And so I logged onto the Idaho Department of Education website, searched ‘how do I become a teacher?’ TFA was on the list, I started an application, right before the deadline. I was one of the last people to be accepted. It has been a wild ride.

TFA: That’s quite a story! Where will you be teaching, and what subjects and grades?

Whitney: I’ll be a third grade teacher at Centennial Elementary School in Nampa.

TFA: What are the biggest educational challenges you are hoping to address as a TFA corps member?

Whitney: My main focus is to empower my students to be able to overcome those barriers in their lives that are linked to income or their location. I have had to experience overcoming large boundaries and barriers. And so I realize that a lot of it has to do with your internal strength, and your ability to persevere and to be able to break down those mental blocks that might be telling you ‘I can't do this,’ or ‘I'm not capable, or ‘it's not something that's an option for me because of my income,’ I want them to start to see themselves as able to achieve any dream that they have. I want them to feel that sense of passion from my side and hopefully they'll take it and run with it.

TFA: What are the things you're most anxious about or worried about as you're about to enter a classroom as a teacher for the first time?

Whitney: Just having everything planned out so that I have something for them every hour, every day. I want to have my curriculum plans set. I want to have my time organized so that I'm not at a loss. I don’t want them to see it in my face that I'm starting new. Because I know they'll clamp down on me if they see weakness.

TFA: And what are you most excited about?

Whitney: I’m just excited to get to know these kids and form that community and gain their trust to build relationships with them. Being part of TFA is all about being part of a mission, being able to be impactful in a broader way in the world. But it's cool that it's from a small, ground-level base. And so having that transformative experience or being part of a transformative process is the most exciting thing for me.