"When I surveyed the public education landscape over the past 20 years, Teach For America was the only organization driving real change.” 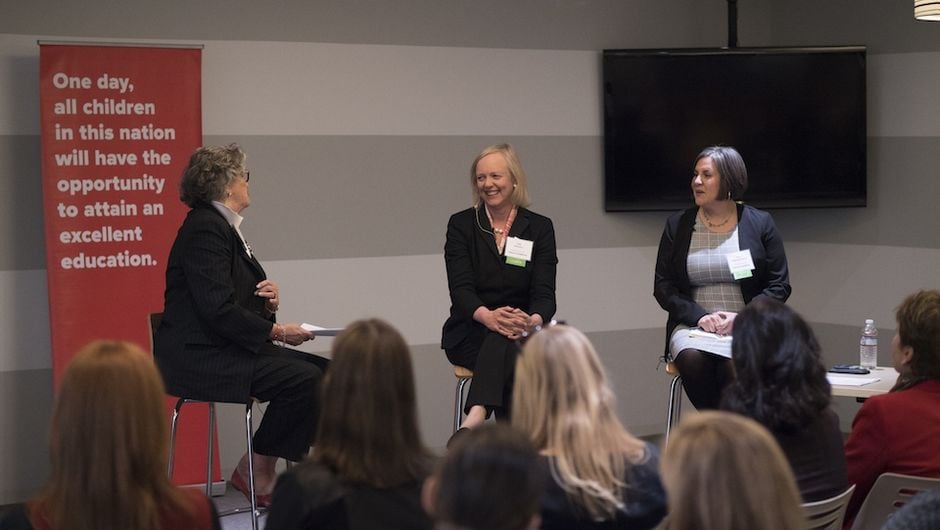 Meg Whitman is not one to shrink in the face of challenge. She transformed eBay from an obscure auction site into a Fortune 500 company, led a dramatic turnaround at Hewlett Packard, and now the one-time candidate for California governor is lending her corporate wisdom to public education as the incoming national board chair at Teach For America.

Meg made some of her first appearances as incoming board chair in San Diego this month alongside Teach For America CEO Elisa Villanueva Beard. Meg is a founding donor of Teach For America–San Diego and helped the region celebrate its fifth anniversary by sharing the region’s impact and vision for the future.
Teach For America has recruited and trained more than 125 individuals to teach in high-need schools in San Diego over the past five years, and is on track to grow to 1,000 alumni and corps members working locally for system-level change in the education, business, and policy sectors in the next five years.

"When I surveyed the public education landscape, Teach For America was the only organization driving real change,” Meg said. “It brings talented, fair-minded people into teaching who may not have considered it before. The experience is transformative for those individuals, their students, and our communities."

Meg and Elisa convened San Diego’s tech CEOs, women in leadership, and community members and urged them to deepen their support for local schools and join Teach For America’s movement to eliminate educational inequity. We caught up with the duo during a Women Leading in Educational Equity panel moderated by Mary Walshok, a dean and professor at University of California–San Diego, at the headquarters of Mitchell, Inc., a generous supporter of Teach For America.

“I think there is a tendency sometimes for women to not take risks, to not challenge the status quo. We had two women on the panel today who spent a lifetime challenging the status quo. What came across is you have to be brave, courageous, try new approaches. We need women who are going out on a limb for new ideas and new systemic change.”

Here are six highlights from the panel.

1. TFA Alumni Are Changing the Trajectory of This Nation

Meg attended Princeton University, where Teach For America founder Wendy Kopp wrote the thesis paper that launched our national teaching corps. But it was the lifetime commitment of Teach For America alumni to educational equity that convinced Meg to join the movement.

"Teach For America alumni are changing the trajectory of this nation. Two hundred alumni hold elected positions. Two are currently running for governor. Their impact spans from schools to the statehouse. That's the leadership we need to ensure all kids receive a quality education," Meg said.

Elisa joined the teaching corps after college, and nearly 20 years later became the CEO. She listed three beliefs that guide TFA’s work: First, the problem of educational inequity is systemic and requires a systemic solution. Second, there’s no quick fix to inequity, but talent is essential. And third, proximity to the problem matters; corps members build relationships with kids, and those relationships transform their life goals. More than 65 percent of TFA alumni work in education and 85 percent work with low-income communities.

“You cannot see what you see in the classroom and then turn away from kids,” Elisa said.

“Teach For America’s talent engine only works when it runs in collaboration with communities and connects students to the local workforce,” Meg said. San Diego organizations like Barrio Logan College Institute and High Tech High provide supportive learning environments, corporations like Mitchell and ResMed provide resources, and the result will be a globally competitive economy.

"I am a founding donor in San Diego because I believe Teach For America leaders will help make San Diego a city where every child has a shot to reach their full potential. Educational equity and the health and wealth of this community are inextricably linked," Meg said.

4. We Need to Support Strong Women in Leadership

Meg was inspired to become a leader by her mother, who went to volunteer for the Red Cross in Boston during World War II, and ended up on a troop ship in New Guinea. When she arrived, the base commander said they needed a mechanic, were any of the women interested? Her mother had never looked under the hood of a car. Four years later she was a certified airplane mechanic and truck mechanic. Her mom used to say if she could accomplish that, her daughter could do anything.

When Meg started at Procter & Gamble, her first job out of Harvard Business School, she said there were 100 brand assistants and only four were women. Her first assignment was to design the perfect-sized hold for a shampoo bottle. It wasn’t what she expected to do with her MBA, yet it was the first step toward Disney, FTD, eBay, and Hewlett Packard. She said she put her head down and did a better job than the guys. She’s not sure if that’s the mentality you need now to succeed, but it was part of her generation.

Getting to work so closely with Meg has been a game-changer for Elisa as she took the helm of a national organization with a network of more than 56,000 alumni, corps members, and staff who reach hundreds of thousands of children nationwide. She said Meg provides perspective, encouragement, advice, and counsel—all based on her extraordinary track record in the corporate world.

“I remember her saying to me once: ‘Elisa, it is so clear to me that you are a very tough-minded person. And you are going to have to be tougher,’ ” Elisa said.

5. Collective Leadership is the Future

Meg pointed to parent organizing as the next major component of education reform, and Elisa agreed, citing the efforts of Memphis Lift, a revolutionary parent group that was founded with the help of a Teach For America alum and expanded through the collective efforts of parents and community members.

“Collective leadership is at the heart of TFA’s strategy. The kind of systems change we need to create educational equity is going to require a broad coalition of those from all backgrounds and working in all sectors,” Elisa said.

UC-San Diego Dean Mary Walshok moderated the panel and reflected on Meg’s and Elisa’s contributions to the conversation and the equity movement:

“I think there is a tendency sometimes for women to not take risks, to not challenge the status quo. We had two women on the panel today who spent a lifetime challenging the status quo. What came across is you have to be brave, courageous, try new approaches. We need women who are going out on a limb for new ideas and new systemic change.”