Ever wondered what it’s like to live in San Francisco? Check out what our current corps members have to say! 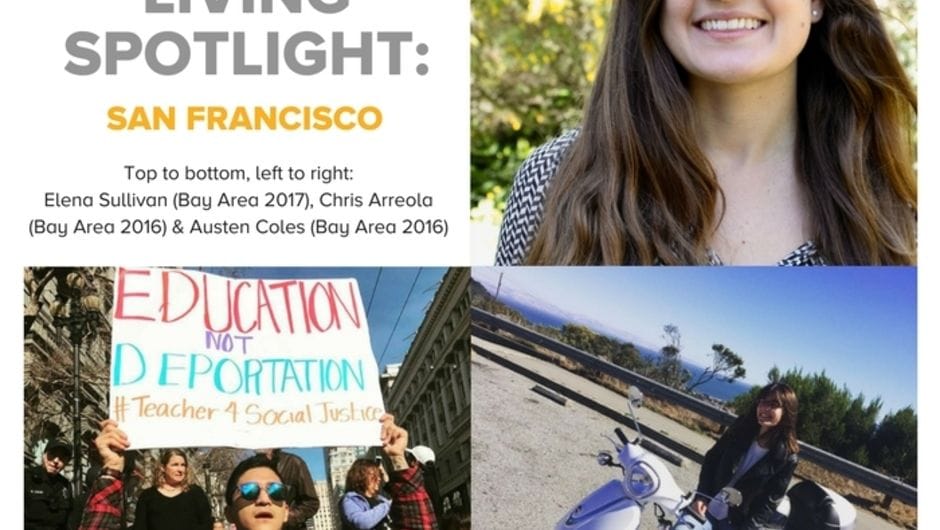 Elena: I live in Bernal Heights, which is a neighborhood on a hill with a sweet view of the city. Bernal Heights is special to me because my grandparents, parents, sister, and I used to live here. Several of my family members still live in the neighborhood, and many of the local stores and restaurants and the library that I used to go to are still here. Bernal Heights feels like coming home again.

Chris: I live in the Bayview District. There is a community sense you get in the Bayview that I think is unlike any other community in San Francisco. I see my students on the streets, and their families stopping to converse as they bump into each other. The grocery stores are still owned by people rather than corporations, and there’s a fierce sense that we will fight for our youth.

Austen: I live in Portola neighborhood. It is a great community that mainly consists of Chinese immigrant families who have been in San Francisco for a long time. It's such a treat to live here because there are so many delicious Chinese bakeries and street food restaurants. I also live next to the second biggest park in the city.

Outside of your neighborhood, where's your go-to place to explore?

Chris: I’m not about making some neighborhoods seem dope and others as not dope. They’re all beautiful; they are all filled with beautiful youth. They are all pushing out families that have been here for generations.

Austen: Each neighborhood has its own very unique vibe and that is really what makes the whole city great. Since there is an abundance of parks throughout the city, they are available in every type of neighborhood. Overall, I lean towards the Mission being my favourite because of its beautiful and political murals and artworks as well as the little taquerías and foods.

Describe your weekends in San Francisco.

Chris: The city is filled with beautiful art. Some places I go to often are Galería de la Raza, SFMOMA, the Museum of African Diaspora (MOAD), the Legion of Honor, the DeYoung Museum, and Clarion Alley.

Austen: I like to explore all sorts of city parks. There are so many places to do "urban hikes" where you are in the middle of the city but have a very natural feel to them. There are several parks big enough to do pretty strenuous hiking – and lots have tennis and basketball courts too. I enjoy going out for dinner or drinks in the Mission or Haight-Ashbury neighborhoods because they have a unique and edgy bar scene. When weather is good, I go to Dolores park and sunbathe/people watch. I also save up money to go to a lot of concerts throughout the Bay. Most every band that goes on a nationwide tour does a set somewhere in the Bay Area and if you're lucky they sometimes do two nights which makes tickets cheaper!

Elena: The beach! A few of us have gone to Fort Funston beach to kick around a soccer ball. I also really enjoy hanging up a hammock in Golden Gate Park and having some quiet time with a book and my journal.

Chris: I began to do more work with the TGI Justice Project and other organizations committed to equity. The people I met there were filled with radical love and compassion that made the space we shared feel like home.

Austen: I have always been adaptable to all the different places I have lived, but overall I think San Francisco has many qualities that can make it feel more "homey" to newcomers. In reality it’s a physically small city. You often see the same street names, can move around the city easily, and sometimes even run into friends/acquaintances while out and about. I find that this city has a unique identity that most everyone can relate to – while also having radically different vibes per neighborhood, which you will begin to understand pretty soon after moving here.

What about the students and families make San Francisco so unique?

Elena: I can really only speak for my elementary school in the Mission. My school is unique because teaching there has truly felt like becoming part of a family – the majority of the students have gone to Mission Prep since kindergarten, so the families have gotten to know one another and the staff is intentional about getting to know parents. A lot of the families live in the area, so when I am walking to school in the morning, I sometimes run into students with their parents who are also walking from their cars or the bus. This is pretty unique for San Francisco; a lot of families around the city have had to move to the East Bay or into different neighborhoods in the city due to rising housing costs, which oftentimes means that students change schools.

Chris: San Francisco is a city with a rich history of resistance. The Bayview is one of the last majority black communities left in the city. Living in a space where everyday people are fighting to stay in their homes and to receive a quality education is really intense. But it’s also what brings us together. Folks have an understanding that we are all in the struggle together.

Austen: The extent of social diversity in San Francisco cannot be understated. There is a very large immigrant population from everywhere in South America, the Pacific Islands, all over Asia and even Eastern Europe. It is amazing how the combined influence of all these cultures shape San Francisco as a city, and one with an identity that values diversity. The communities in SF are very socially conscious and willing to push the envelope on inclusiveness and promoting equity.

What’s the cultural wealth of this city you bring into the classroom?

Elena: As a special education teacher at an elementary school, there are a lot of assessments that students with IEPs must complete and a lot of meetings with parents regarding their child’s learning disability and academic goals. One type of cultural wealth that I have been intentionally trying to include in my time with my students and parents is linguistic capital. The majority of my students are bilingual and some parents only speak Spanish, so it’s important that the assessments and meetings are linguistically equitable; this might mean that a translator is present at the meetings with parents and that assessments are given to students in the language they are most comfortable in. I’m still learning a lot about how to utilize inclusive linguistic practices in my lessons!

Chris: The families’ perseverance and resilience. Also, the art that is all over the community that is oftentimes mistaken for graffiti or simple walked by.

Austen: Students have experiences that really have opened their eyes and minds to many things that young people in more rural or small cities couldn't have imagined. Many of the students are passionate about social justice and have had very hard experiences that have developed a sense of grit and determination for improvement. Cultural wealth is abundant, especially among our immigrant students who are able to bring multilingual perspectives and skills to the classroom – which is a huge asset to building a classroom that is a microcosm of the real world.