A Different Look at "America the Beautiful"

Through music and mentorship, two recording artists reimagine what a beautiful America could look like for all. 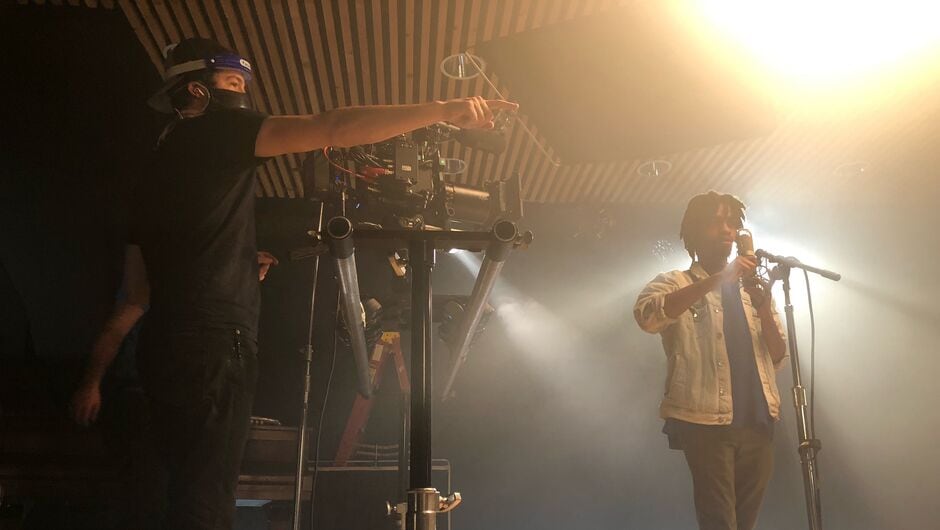 Andrew DeMuro (Greater Chicago-NW1 ‘12) is a singer, songwriter & recording artist who serves as the Regional Director for Guitars Over Guns Organization, a non-profit dedicated to empowering youth in Miami and Chicago through music education & mentoring relationships with professional musicians. Christopher Horace, who goes by F.A.B.L.E (“Finally, A Black Life Explained”) when he’s performing, is a longtime mentee in the Guitars Over Guns program and a Chicago-based recording artist.

With the help of DeMuro and the Guitars Over Guns ensemble players, F.A.B.L.E recreated the historic anthem “America the Beautiful” to reflect the multifaceted and often conflicting realities of life in America. We sat down with this dynamic duo to explore the inspiration behind the song, their journey as artists and how music has the power to shift lives and American culture for the better.

How did you approach remixing "America the Beautiful"?

F.A.B.L.E: Over the course of the pandemic, there's been a lot of controversy as to what America looks like, and what it looks like depending on what kind of person you are in this country. People of color’s perception of a beautiful America may look a little bit differently from others. On one hand, this is a beautiful country. But everything has its flaws. I wanted to try to find a way to like, talk about it without insulting it.

Andrew referenced Ray Charles’ cover of “America the Beautiful.” His version sounds a little fight songy. I wanted to try to give something to that same effect, but also use my ability as a lyricist to write in a couple of new lines, and really make it a remix.

Andrew: In our brainstorming session, we had Jimi Hendrix's version of the Star-Spangled Banner in mind. It is taking a song with patriotic yet problematic roots and reclaiming it. Spinning it on its head so that it belongs to a population that was oppressed by it originally. So that's what I feel is important about this "America the Beautiful" project. I’m incredibly proud of all of the young performers and partners that we engaged in on the shoot, but particularly to F.A.B.L.E [He] did so uniquely well with this song; that I hope it will resonate with the audience.

Watch the Behind the Scenes from "America The Beautiful: Reimagined"

Watch behind the scenes to learn what went into reimagining this historic anthem.

What would a beautiful America look like for you?

F.A.B.L.E: Ideally, in a beautiful America, everyone is equal, not just on paper.  Living without fear no matter what you look like, what your upbringing was, what your cultural demographic is. There'll be an equal number of opportunities for you, despite what you do. The reality is, at the moment, that's not the case.

There are protests all over the nation, just for situations like that. There's been a lot of controversy with the recent event that happened with the Capitol building, and people comparing it to Black Lives Matter protests, and how it felt like the consequences between the different events weren't weighted equally. But a beautiful America to me would be an America where that doesn't even have to be a debate because we don't need to protest either side.

Andrew: For me, I mean, I'll go to F.A.B.L.E’s lyrics, particularly the part where he says, “I stand in proud memory of those who made it so that I could sing this. In brotherhood of those who stand in witness.”

A beautiful America is an America that understands the past and can look itself in the face and say, ‘We can do better.’ That doesn't mean we won’t blame anyone, because people are definitely at fault. But in a beautiful America, we’re concentrated on the goal of equity.

It’s an understanding of where we've been, and an acceptance that we need to look ourselves in the face, admit, apologize and do better. That's the vision of America that I was taught growing up, which was kind of falsely taught like we already did that. Anyone who's lived through the past week, in the past four years knows that we are very much still doing that, and have a long, long way to go.

F.A.B.L.E, you said you wanted to offer a different perspective on America without being insulting. You could have easily gone the other way, considering everything that’s going on. Why did you frame your lyrics the way you did?

F.A.B.L.E: I always felt like in any sort of situation, there's a lesson to be learned. I've always had the mindset of educating. If we're trying to deliver a different viewpoint; being insulting isn't necessarily the way to go about it. You can deliver the truth without trying to make someone else seem wrong, even in instances where another person may be wrong. There is a better way to deliver the medicine than just giving it to them straight.

What was it like working and guiding the younger musicians on the music video set?

Andrew: Some of our mentors and instructors who work with our middle and high schoolers were able to rally musicians to be in his band for this project. Our mentors worked to prepare them over the course of the first couple of weeks of January. When they got into the studio, they already knew their parts and knew how to perform. F.A.B.L.E got to be the artistic director where he could say, “I really like what you did there. But can you try this? Or tell me what you were thinking when you had this in mind?” Because he still is a young artist, there is this kind of peer-to-peer mentoring taking place that we really value in our program.

So let’s pull it back for a little bit. F.A.B.L.E, how did you get into music? Were you always musically inclined?

F.A.B.L.E: My grandmother made it a habit of trying to teach all of her grandchildren piano. Unfortunately, she passed away before she was able to get to me. Around second grade, I started taking piano lessons through the program they had there. I always enjoyed it; it was a little haven away from the monotonous routine of schooling. Anything that was artistic, I really appreciate it. I really tried to take advantage of what I was learning from Miss Chapman when doing my piano lessons.

That eventually carried on into my dad wanting me to do Drum and Bugle Corps. I was forced to learn trumpet which ended up becoming my primary instrument and which eventually took me to Vandercook College of Music. Tuition got really crazy and I decided to go to the city college route. While doing that, I found an interest in audio engineering and the hip-hop scene. Everything just started evolving from there. I became a performing artist and it kept bringing more opportunities. I stuck with it and here I am. 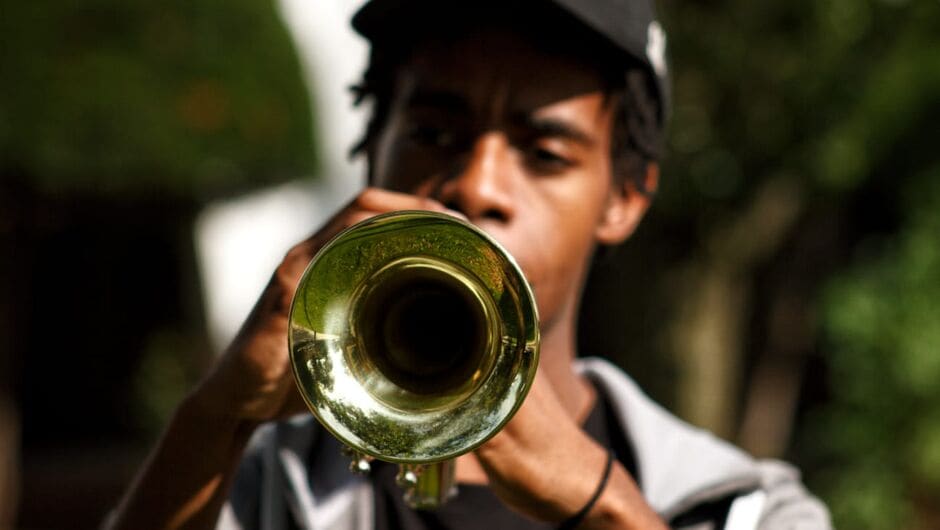 With his multifaceted musical background, F.A.B.L.E is able to bring a variety of sounds and stories to the projects he takes on at Guitars Over Guns.

Why did you choose F.A.B.L.E to lead this project?

Andrew: When I met F.A.B.L.E a couple of years ago, the majority of the studio population were rappers that had been doing this their whole lives. Their training came from working with their family, being in school, getting challenged by other rappers, or having that one teacher with who they really like to write with. But the training was less formal.

With F.A.B.L.E, he had a background from Vandercook, which is a college for music educators here in Chicago. He played the trumpet. He knew how to write and score music. What I saw was a uniquely capable individual for projects like this one.  So when opportunities arise, he's usually one of the first that I go to.  This project was no different. That's the relationship that we have. Our time knowing each other has been one where I'll keep bringing the opportunities as long as he keeps saying yes.

Andrew, how has teaching shaped your passion for music and mentorship?

Andrew: Music was the thing that clicked when I was in school. I'm really thankful for the great teachers and mentors who I grew up with. I wanted to find a way to make music part of my life, even if it wasn't my primary career.

When I was teaching my first couple of years, particularly during my tenure with Teach For America, I was new to the city of Chicago. As a first-year, second-year, and third-year teacher, I was looking for ways to bring things that I loved into the classroom, particularly to relate with students in a city where I didn't grow up.

I started an after school choir at my school because there was no curricular music program. We didn't have money for instruments, but everybody had an instrument attached to their body - their voice. So I said, just come after school, we'll sing, we'll make music acapella. We'll learn a little bit about each other in the process.

The thing that I took away from it the most was previewing what my experience with Guitars Over Guns would be like. The times I remember most about working with that choir was when we weren't singing at all. It was when we were building relationships with each other: spending evenings in, Saturdays and field trips with each other, the bus rides, the rides home, the meals that we shared together. I realized that without music, I don't know if that wouldn't have been possible, but it definitely wouldn't have happened in that way.

It felt so obvious to me that there is this gift that musicians have to communicate with kids. I knew that I wanted to stay committed to making that part of my life.