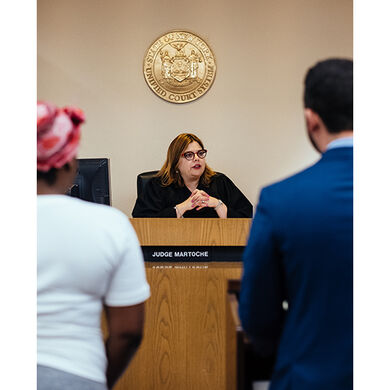 Courts throughout New York state are modeling themselves after Judge Amy Martoche’s unique approach to assisting victims of human trafficking.

In the spring of 2018, One Day visited Buffalo, New York, where Judge Amy Martoche (S. Louisiana ’93) founded and presides over the Human Trafficking Intervention Hub Court, or HTIC, one of the first courts in the nation designed to help people who are the victims of human trafficking.

When defendants appear in Martoche’s courtroom on charges of prostitution or related crimes, her court provides them with links to services such as counseling, legal advice, relocation assistance, and treatment for addiction.

At the time the article was published, Martoche’s court was the first in New York state to serve as a “hub” court, meaning that defendants not only in Buffalo’s Erie County, but also six surrounding counties, are directed to Martoche’s court and the services it offers. Martoche petitioned the state for the hub model because it extends the reach of the court’s rehabilitative services.

In the past year, the New York state legislature has made it so that all human trafficking courts outside of New York City automatically are hub courts. “This is a direct result of what we set up in Buffalo and pushed for,” Martoche says. The hub model has now been expanded to six courts throughout the state, with one more in the final stages of planning. To aid the expansion, Martoche has traveled to the other courts to help train the judges and lawyers.

In Buffalo, Martoche’s work continues. Since her court’s 2013 creation, Martoche has seen about 300 defendants. Of them, only about 20% have been rearrested on prostitution charges, compared to a typical recidivism rate for prostitution of about 80%. Miricle Livingston (pictured with her back to the camera) is one of the success stories. She first came to Martoche’s court in 2016. Now she is living safely away from her trafficker, enrolled in community college, and working with the court’s resource coordinator to find employment. She hopes to become a pharmacist. Livingston is also working with an attorney to apply to vacate her trafficking convictions.

Featured image: One year after entering Judge Amy Martoche’s court for victims of human trafficking, Miricle Livingston (in white, facing Judge Martoche) is living safely on her own and attending community college.