Menu to be demonstrated

Items to be prepared beforehand

Method
Combine all the ingredients in a high-powered blender or food processor and process until smooth.

Method
Combine all the ingredients in a food processor. Process until smooth, then transfer to a jar. Place a sheet of wax paper on top and then screw on the lid. (The paper prevents the vinegar from reacting with the lid.) Let sit in a cool, dark place for a day, then move the jar to the refrigerator.

Method: Place all the ingredients in a medium pot along with 5 tbsp water and bring to a boil over high heat. As soon as it comes to a boil, remove it from the heat. Let cool completely, then strain through a fine-mesh sieve and transfer to a clean jar with a tight-fitting lid.

Method
Roughly chop the celery, onion, green onion, culantro, and thyme. Add all ingredients to blender, then purée on high speed until smooth.

Method
1. In a shallow bowl, spoon rice over the bottom then top with curried chicken leg and dress with curry. Place the baigan choka next to the chicken and the repeat with the chutney.
2. Garnish with green onion, cilantro, and celery leaves then serve with lime on the side and enjoy immediately.

Method
1. Marinate the chicken: Combine the salt, onion, Green Seasoning, Curry Powder, House Spice, and chicken in a large bowl. Cover and refrigerate for 24 hours.
2. When ready to cook, in a large pot over high heat, add 2 tablespoons canola oil. When it shimmers, sear the chicken until deeply golden brown on both sides, about 4 minutes. Remove to a plate and set aside. Add ½ cup chicken stock to the pot, stirring to scrape up any browned bits, then return chicken to the pan. Add any remaining marinade, the Scotch bonnet (leaving it whole), Peppa Sauce, and chicken stock.
3. Bring the mixture to a boil over medium-high heat, then reduce heat to medium-low. Simmer gently, uncovered, for 1 hour. Remove the chicken to a plate. Add the potatoes, cover partially, and simmer 30 to 40 minutes, until just tender. Add up to ½ cup water as needed to keep saucy while the potatoes cook.
4. Remove and discard the Scotch bonnet, then return the chicken to the pot. Taste and adjust seasoning, then serve.

Method
1. Heat oven to 350°F. Rinse rice until water runs clear, then set aside.
2. In a small saucepan with a tight-fitting lid, heat oil over medium-high heat. When it shimmers, add the rice and toast, stirring frequently, for 8 minutes.
3.Add the stock and salt. Bring to a boil, stirring frequently, then remove from the heat and cover with the lid. Place pot in oven for 18 minutes.
4. Remove pot from oven and let sit, covered, for 5 minutes. Uncover, fluff the rice gently with a fork, and let it steam out for 5 minutes. Taste, add more salt if desired, remove the thyme and bay leaf, and serve.

Method
1. To Be Done Ahead: Prepare a grill for high heat. Rub the eggplant and tomato lightly with oil and season with salt and pepper.
When the grill is hot, reduce heat to medium-high and set the eggplant and tomato directly on the grates. Char the vegetables, using tongs to turn them often, until the skin is totally charred and the flesh is soft, 10 minutes for the tomato and 30 to 45 minutes for the eggplant Set aside in a bowl to cool slightly. Trim away the eggplant’s stem, then roughly chop the eggplant and the tomato, leaving the charred skin on.
2. In a large pan over medium heat, heat the oil. When it shimmers, add the onion and sauté until translucent, about 5 minutes. Add the GGP and cook until fragrant, about 1 minute, then add Peppa Sauce, thyme, chopped eggplant and tomato, and any juices from the eggplant and tomato. Bring to a simmer over medium heat and cook, stirring often, until most of the liquid has evaporated, about 5 to 7 minutes.
3. Add the butter a few cubes at a time, stirring to melt completely before adding more, then remove from the heat. Season with lime juice and salt and serve warm.

Method
1. In a large pan over medium heat, heat the oil. When it shimmers, add the GGP and sauté about 3 minutes then add the curry spice and cook for 2 minutes more. Add the brown sugar and mango cook for about 10 minutes stirring frequently. Add the vinegar, 2 tbsp of water and salt. Bring to a simmer and reduce by 75% to a syrupy consistency.
2. Remove from heat and transfer to a container to cool. Once cool, fold in cilantro then season to taste with salt. Kwame Onwuachi is a James Beard Award-winning chef, and author of the critically acclaimed memoir “Notes from a Young Black Chef,” which is being turned into a feature film by A24. Kwame’s resume is incomparable: he has been named one of Food & Wine’s Best New Chefs, Esquire Magazine’s 2019 Chef of the Year, and is a 30 Under 30 honoree by both Zagat and Forbes. He’s also been featured on Time’s 100 Next List and has been named the most important Chef in America by the San Francisco Chronicle.

Kwame was born on Long Island and raised in New York City, Nigeria, and Louisiana. Onwuachi was first exposed to cooking by his mother, in the family’s modest Bronx apartment, and he took that spark of passion and turned it into a career. From toiling in the bowels of oil cleanup ships to working at some of the best restaurants in the world, he has quite a dynamic collection of skills and experiences. Onwuachi trained at the Culinary Institute of America in New York City and has opened five restaurants before turning thirty; including the groundbreaking Afro-Caribbean restaurant, Kith/Kin, in Washington, D.C.

Next up, Kwame will appear as a judge on season 18 of Top Chef this coming April 2021. He first appeared as a contestant on the show in season 13.

Kwame currently serves as Food & Wine’s executive producer. In this newly appointed role, Kwame will collaborate on big brand moments and events, including the Food & Wine Classic in Aspen, where he'll host cooking demonstrations and events and also serve in a new role as F&W Pro ambassador to the hospitality industry. Kwame will also focus his efforts on expanding Food & Wine’s Best New Chef Mentorship program. In August 2021, he will host “The Family Reunion presented by Kwame Onwuachi,” a multi-day event scheduled to take place in Middleburg, Virginia that will celebrate diversity in the hospitality community. 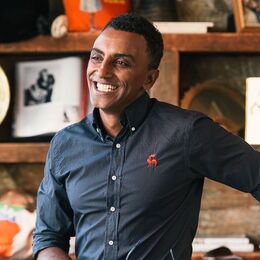 Marcus Samuelsson is the acclaimed chef behind many restaurants worldwide including Red Rooster Harlem, MARCUS Montreal, and Marcus B&P, and Red Rooster Overtown in Miami. Samuelsson was the youngest person to ever receive a three-star review from The New York Times and has won multiple James Beard Foundation Awards including Best Chef: New York City. He was tasked with planning and executing the Obama Administration’s first State dinner honoring Indian Prime Minister Manmohan Singh. Samuelsson was also crowned champion of television shows Top Chef Masters and Chopped All Stars, and was the winning mentor on ABC’s The Taste. Samuelsson received the James Beard Foundation Award for Outstanding Personality for his TV series titled No Passport Required with VOX/Eater and he is an executive producer of Viceland’s show HUSTLE.

He currently serves as Executive Chef-in-Residence of Buzzfeed Tasty’s talent program. A committed philanthropist, Samuelsson is co-chair of Careers through Culinary Arts Program (C-CAP) which focuses on underserved youth. Samuelsson also co-produces the annual week-long festival Harlem EatUp!, which celebrated the food, art, and culture of Harlem for the sixth year in a Telethon special on ABC. He is the recipient of the 2019 Vilcek Foundation Prize in Culinary Arts, awarded to immigrants who have made lasting contributions to American Society. He is the author of multiple books including The New York Times bestselling memoir Yes, Chef, The Red Rooster Cookbook: The Story of Food and Hustle in Harlem and his newest cookbook, The Rise, is out now.

During the COVID-19 pandemic, Samuelsson converted his restaurants Red Rooster Harlem, Marcus B&P in Newark, and Red Rooster Overtown in Miami into community kitchens in partnership with World Central Kitchen, serving well over 200,000 meals to those in need. Marcus is also the founder of the Marcus Samuelsson Group (MSG), which works to maintain Samuelsson's culinary and cultural pillars, creating outstanding experiences that celebrate food, music, culture, and art in all its endeavors from high-end restaurants and fast-casual cafes to media and experiential events. He has an audio project with Audible, titled Our Harlem, and his recent podcast titled This Moment with Swedish rapper Timbuktu is out now.