Meet the creator of Solidarity Gardens. 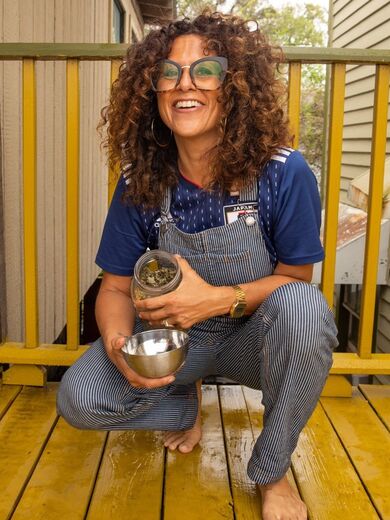 jackie sumell is the creator of Solidarity Gardens. In addition to her work with Solidarity Gardens, jackie is an artist and abolitionist. For the past 2 years jackie has been working in partnership with Teach For America Greater New Orleans to create continued volunteer opportunities for TFA’s corps members and give them the opportunity to learn more about the work she does. Jackie has been working in criminal justice since 2001 when her journey began with her elder, Herman Wallace, from that work birthed the project The House That Herman Built (Herman’s House). Herman was a Black Panther and political prisoner and spent 41-years in solitary confinement in the state of Louisiana. The House That Herman Built (Herman’s House), is an ongoing exhibition, book, advocacy campaign, and Emmy Award winning documentary (Best Artistic Documentary, 2013).  On October 1, 2013 Herman Wallace’s wrongful conviction was finally overturned and he was released from prison. He died 3-days later from the complications of advanced liver cancer.  Through her work with Herman, jackie met John Thompson. Their relationship strengthened through their Soros Justice Fellowships and commitment to criminal justice in New Orleans. RAE hosted a version of the exhibition Herman’s House and JT was one of the first to visit Herman upon his release.

The work: Fueled by the desire to keep Herman’s legacy alive, jackie began the Solitary Gardens. The Solitary Gardens are a collaborative social practice project that seed important conversations around alternatives to incarceration. Centered around abolitionist pedagogy, this project directly and metaphorically, asks us to imagine a landscape without prisons. Utilizing the tools of prison abolition, art, permaculture, and transformative justice to facilitate exchanges between incarcerated persons and volunteers on the “outside.” Solitary Gardens are built from the largest chattel crops (sugarcane, cotton, and tobacco) and are the same size as a standard solitary prison cell, illustrating the evolution of chattel slavery into mass incarceration. The contents of the beds are designed by currently incarcerated individuals, known as Solitary Gardeners. As the garden beds mature, the prison architecture is overpowered by plant life, proving that nature—like hope and compassion—will ultimately triumph over the harm humans impose on the planet.