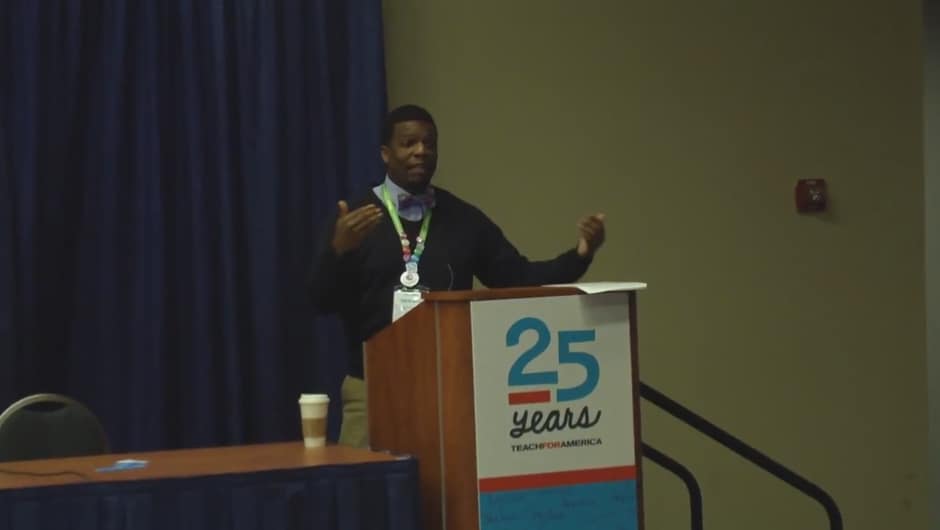 Teach For America’s LGBTQ initiative celebrated its one year anniversary in October, and its goals and mission were discussed at length at our 25thAnniversary Summit. But it wasn’t just the challenges LGBTQ students face who were at the forefront of the conversation, the resiliency of these students was also exalted.

Raught shared the story of her student Skye who researched LGBTQ youth and homelessness, connecting it to the content Raught was teaching in order to enact social change.

"Not only did she research it and argue for policies and practices that would end this [issue], but she and her mom are currently researching how to start a non-profit to attack this problem," Raught said.

Inspired by this beautiful example of resiliency, Raught is amazed by her students’ sense of empowerment and their instinct to continue their work outside the classroom.

“They truly want not only to think about these issues and learn more about them,” she said. “They want to change them and fix them."

Wodatch recalled the story of a 4-year-old child transitioning from one gender to another and how the child’s parents came to speak with Wodatch about how Two Rivers could support their child.

"This kiddo is such a bright, spritely, wonderful little human being," Wodatch said, admitting that LGBTQ youth and adults have to have an amazing sense of self-awareness and self-confidence to realize who they are, when often, they are told they are wrong.

“And that just seems like an incredible resiliency,” Wodatch said.

Ling shared her experience in the small town of Lake Village, Arkansas, where students at the local high school became fed up with the bullying of LGBTQ students. Frustrated and wanting to see change happen, the students figured out how to support their LGBTQ peers in such a way that their classmates wouldn’t face further bullying.

"What was amazing to see was how the students navigated the constraints that they were within, being in a town of 2,800 people,” Ling said, noting the nearest gay-straight alliance was over seven hours away in Northwest Arkansas and no LGBTQ organizations had a foothold in their community.

Despite the barriers, students to the initiative to form a GSA and hold meetings off campus, and even organized a Pride Week leading up to the Gay, Lesbian and Straight Education Network’s Day of Silence.

Check out the video below for the full seminar and more on what these educators have to say regarding safety and empowerment in the education of LGBTQ youth.

Beyond Marriage Equality: Safety and Empowerment in the Education of LGBTQ Youth