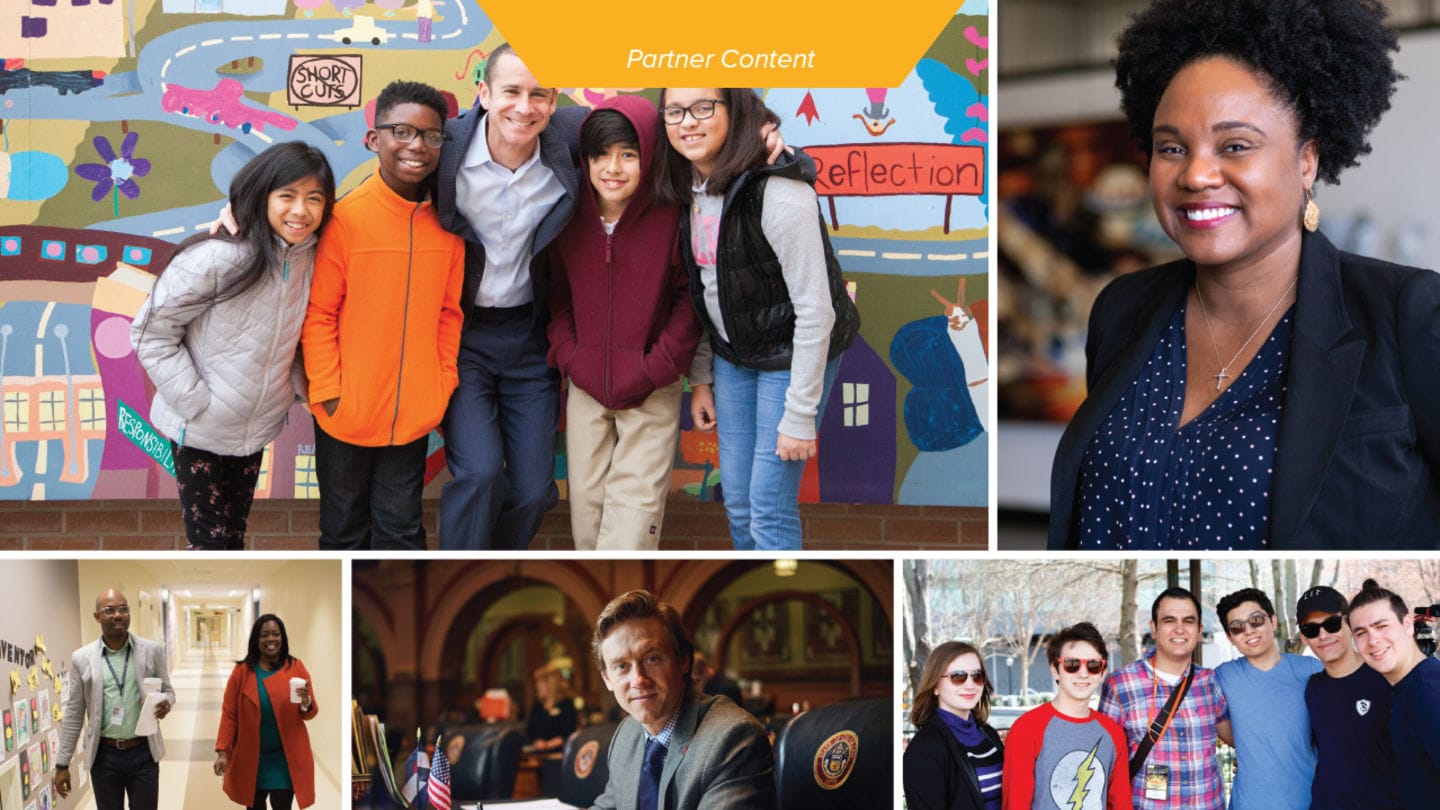 Teach For America: 25 Years of Impact

Teach For America’s network of 50,000 corps members and alumni is leading change for kids.

This story, provided by Teacher For America, ran as a special advertiser supplement in the April 20th, 2016 issue of Education Week.

These are the responses Teach For America alumni give over and over when they are asked why they continue to work toward educational equity.

Many alumni grew up in families that struggled to make ends meet. They had managed to make it to and through college, but many of their peers did not. They wanted to give that chance to others. Other alumni recognized that, since preschool, they had been on a path that could take them as far as they could imagine. They wanted to ensure that all children were positioned to dream big and had the freedom, opportunity, and know-how to realize those dreams.

Regardless of their backgrounds, alumni talk about the inspiration they found in their students, families, colleagues, and the greater community, and how that informed their own paths.

“Our people are bound by an unbreakable belief—a fierce, unwavering belief in the potential of all students and in their right to an excellent education.”

When Kathy Hollowell-Makle (D.C. Region ’98) joined Teach For America nearly 20 years ago in Southeast Washington, D.C., she was told to expect that her students would be “very poor, that they’d be significantly behind, that their families wouldn’t have resources, and that they wouldn’t care.” Instead, she said, “I found the total opposite. . . They cared so deeply about what was to become of their children. I saw a passion in other teachers and in parents that I was not prepared for. . . and that, in turn, lit a fire under me and a recognition in me that I was responsible for this community of children.”

As a result of these experiences, Teach For America alumni seize opportunities to make a difference and become lifelong agents of change inside and outside of education. More than a quarter of alumni continue to teach, like Hollowell-Makle, who was the District of Columbia Public Schools’ Teacher of the Year in 2013. Nearly 1,500 serve as school leaders, system leaders, and union leaders. Teach For America alumni create and lead nonprofit organizations and other social ventures, advocate for low-income communities, serve as community organizers, hold public office, and work for change as doctors, activists, lawyers, and entrepreneurs.

Wherever they live, whatever they do, Teach For America alumni have something in common: They are “bound by an unbreakable belief—a fierce, unwavering belief in the potential of all students and in their right to an excellent education,” says Teach For America Chief Executive Officer Elisa Villanueva Beard (Phoenix ’98), the first alum to lead the organization.

In commemoration of its 25th anniversary, Teach For America commissioned a team of journalists to speak with alumni in five of its 52 regions to find out how they are working toward the day when the organization’s goal becomes a reality and “all children in this nation have the opportunity to attain an excellent education,” and to piece together the impact a long-term TFA presence has on a community as a whole.

The five regions selected—Denver, Colorado; Washington, D.C.; New Orleans and South Louisiana; Oakland, California; and the Rio Grande Valley in South Texas — differ geographically, demographically, and politically. Yet in each community more students are graduating from high school, going to college, and finding success. At the same time, TFA alumni recognize that more work needs to be done—proficiency rates are still low and dropout rates remain unacceptably high—and are working in partnership with communities to change these outcomes.

Many lessons emerged from these conversations: the importance of empowering students, families, and community members to bring about change; of having high expectations for students and creating experiences and pathways to help them realize that fantastical ideas, like graduating from college, are entirely possible; of collective action, including working with those with differing points of view; of approaching the challenge of educational inequity from multiple vantage points; and of consistency in leadership to give policies and practices a chance to show results.

These lessons are explored in greater detail in each region’s individual profile. There are two overall conclusions, though, that can be drawn from the series as a whole.

Teach For America has had an impact on the education landscape of the communities it serves.

It is unwise to claim that progress in education is catalyzed by any one factor when the elements of success (or failure) in education are many and interact in complex ways. However, while reading these profiles it is useful to consider the counterfactual: What if TFA alumni were not working to increase educational quality and equity in that area?

What if JoAnn Gama (Rio Grande Valley ’97) had not founded IDEA Public Schools, a charter school management organization that operates 30 pre-K to 12th grade schools in the Valley? Would the more than 1,900 IDEA graduates from the Valley who are attending or have earned degrees from four-year colleges across the country have found their way?

“Part of the reason R.G.V. is on the cutting edge of education reform is that TFA helped get that conversation started over 20 years ago,” Torkelson says in the profile on the region.

Would D.C., where TFA alumni help shape policy and practice in the school district and charter school systems at every level, still be the fastest-growing urban school district in the country, according to the National Assessment of Educational Progress?

Jennifer Niles, who oversees D.C.’s schools as deputy mayor for education, attributed the gains to hard work, strong leadership, and city and school district policies that have remained in place for more than a decade. “Consistency is one of the key components for making big gains, and TFA has been a consistent partner throughout all of this,” she says. “Every piece of the puzzle has had TFA connections.”

TFA provides schools with a hiring pool they might not otherwise be able to access. “Our success in education is dependent on the quality of our educators and school leaders, and TFA is first and foremost a source for bringing talented people into teaching—because we can’t possibly recruit on every college campus like TFA,” Tom Boasberg, superintendent of Denver Public Schools, has said.  “Many TFA alumni go on to important leadership roles in schools and government. So TFA extends our reach.”

Teach For America believes that collective action and community empowerment are fundamental to systemic changes.

Teach For America remains controversial in some areas and with certain groups. This is in part because change sparks disagreement. This is especially true when change involves schools, which are central and often deeply personal to communities and families. Additionally, Teach For America staff, corps members, and alumni have made missteps. Too many times they have acted as outsiders who did not fully understand and become part of the community they were trying to serve.

Kira Orange-Jones (South Louisiana ’00), the executive director for TFA’s Greater New Orleans region, notes in the Louisiana profile that the “heroic work of individuals” can take the system only so far. “Public education in the city has moved only from a failing system to a C system, when what we want to create is an A system.” To get there, she says, will require collective action, meaning corps members and alumni working more closely with one another and with the community.

Teach For America alumni are leading the charge for greater and deeper community engagement. Kristin Ehrgood (South Louisiana ’92) knew early on that “I couldn’t be a good teacher unless I knew [students’] families, because they knew their children better than I did.” She founded D.C.’s Flamboyan Foundation to train teachers to work effectively with parents. “It’s going to take more than TFA. It’s going to take us reaching beyond one another and really partnering with others to provide the web of support kids need.”

Other alumni are forming advocacy organizations—such as RISE Colorado and Great Oakland Public Schools—to inform, educate, and mobilize parents and communities. Ron Snyder, former executive director of Oakland Community Organizations, has said that the bonds Teach For America corps members and alumni have forged with the community have been vital to its educational improvement. “They began to work with teachers and parents,” he says of their efforts, “house to house, school to school, church to church—creating an appetite for improvement.”

“Some people think TFA is about two years of teaching, and it’s really not,” Teach For America founder Wendy Kopp says. “This is about channeling the energy of our country’s most promising future leaders toward what I think is the most fundamental issue we face as a country: the fact that, despite our aspirations to be a place of equal opportunity, where kids are born still predicts, on average, not only their educational outcomes but their life outcomes.”

“This is a big, systemic problem, and what that means is that we have to come at it with an enormous amount of talent and energy and leadership at every level of the system,” she says.

As these profiles show, this is happening. 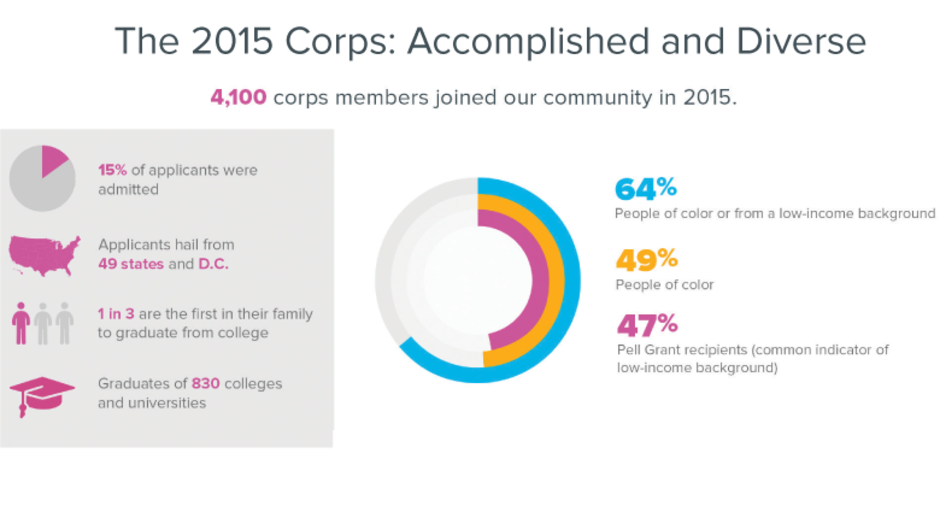