The Sue Lehmann Excellence in Teacher Leadership Award recognizes outstanding teacher leaders. Read on to see how this year’s winners and finalist embody anti-racist leadership for all children. 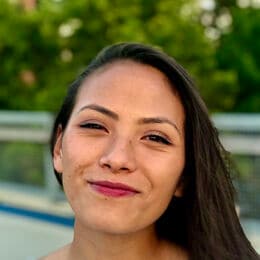 Anna Li Bryant is a bright light for students and the future of education. As an ELA teacher focused on extracurricular enrichment programming at Catalyst Maria High School in Chicago, Anna is passionate about language and writing. And, as a part-time curriculum development specialist to more than 20 teachers in over 30 classrooms in the Chicago Public School system, she knows the power language can have on advocacy.

Her own use of language tells a story of power in America. Her father was forced to assimilate and speak “standard American English” when he was in school, and it’s a reason why Anna  cannot speak Mandarin, the language of her Chinese grandparents who immigrated to the U.S.

As an anti-racist teacher leader, Anna often shares this story with students. They discuss the implications of identifying a "standard English" and how a "new English" reflective of shared ancestry and community can foster change. It’s why Anna begins every class with the mantra, “Write to Ignite”—a rallying cry for her students that embodies the idea that community, equity, and language must be inextricably linked.

“To write to ignite means to use your voice, power, and creativity to enact social change,” she explains. “I want students to know about the power within themselves, but also their community cultural wealth—the inheritance of Black and brown innovation that is coded into their DNA.”

This emphasis on community carries over into her classroom where Anna encourages her students to actively participate in curriculum-creation and take ownership of what they learn. When asked how she comes up with great curriculum ideas, she cheerfully replies, "Ask your students!"

In fact, Anna finds that the less she speaks in a class, the more her students learn. She lets her students select new units to learn for the school year, research and invite community organizers, and even facilitate student-centered discussions. Her students are often engaged in discussions about writing without her facilitation. She believes by allowing students to take ownership of their education—they realize what they have to offer as individuals and as a collective.

Anna sees her role as an anti-racist educator to amplify opportunity for all. It’s an approach with a proven record of changing policies with lasting impact. After noticing high numbers of linguistically diverse students, Black males and students with disabilities receiving one or more failing grades at mid-year, Anna led the Grading for Equity initiative at her school. This multi-year initiative has redesigned the school's approach to grading, ensuring that student's grades truly represent what they’re achieving in class.

With Anna’s vision, teachers began to shift to a reward-based grading for equity model, allowing for true mastery of material through retakes of failed or missing assignments. This shift, along with a change in the passing grade minimum to 50%, incentivizes students to tackle more difficult content and has enabled the school to reduce the percentage of failing students by 71%. It’s a successful initiative that represents the embodiment of Anna’s “Write to Ignite” mantra and utilizing one’s skills to act as an agent of change.

It's clear that Anna learns from her students just as much as they do from her, and she taps into open classroom discussion to put her anti-racist leadership into action. For example, she was so inspired by the entrepreneurial spirit of one student that she started Catalyst Maria High School’s first ever Investment Club—a program she’s excited to grow as a 2021 Sue Lehmann Award Winner. She also spearheads interview day as well as college essay and SAT bootcamps.

When asked about the impact her teaching philosophy has made, Anna says, “During this era of resistance in American society, our students need the space to hone and develop as agents of change. In education, there's an emphasis on the future tense for what our students ‘can be’ or ‘will be.’ The reality is that our students are already in the present tense, actively creating change in the community. They do not need empowerment—they are already powerful. This is what it means to ‘write to ignite.’" 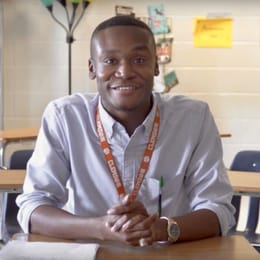 Deion Jamison began teaching in the fall of 2017 with the goal to cultivate a learning environment conducive to producing productive citizens of our world. As a homegrown, Black, queer male from low socio-economic status, Deion shares various identities with many of his students. And still, the ongoing pandemic has highlighted that his approach to instruction did not cater to his students, nor was it authentic to who he was in relation to them.

“The pandemic allowed me to become critical of my own teaching philosophy and practices,” explains Deion. “I wanted to shift my approach to teaching and learning from one of compliance to community; my students needed my classroom to be a place where they were affirmed in their own cultural selves and could learn more about those that are different from them.”

Deion recognized that sharing multiple social identity markers was not enough to relate to his students nor was it culturally responsive teaching—an intentional approach to learning that connects students’ culture, experiences, and languages to what they learn. To achieve his goal of creating his desired learning environment, he needed to provide his students with an educational experience that went beyond the borders of the classroom.

With the encouragement of his Teach For America mentor, he began by implementing the Forty Book Challenge and noticed a large percentage of students reading and engaged with Black- and Latinx-centered books, even after independent reading time had concluded. It inspired him to immerse himself in literature that centered antiracism and culturally responsive teaching. “I knew that in order to be an effective anti-racist teacher-leader, I must first do the work myself,” he explains.

Although increasing student achievement through quantitative measures was important to him as a young educator, what Deion felt was most important was allowing students to become scholar-activists who can identify a problem and advocate on behalf of or solve it intelligently. He knew his approach conflicted with expectations to teach a prescribed, scripted curriculum. Nonetheless, he embraced culturally responsive teaching and reshaped his approach because he felt it was in the best interest of his students and in alignment with his vision for impact.

Now, Deion has his students engaged with relevant works and asks them to synthesize knowledge and examine informational, literary, and visual texts critically. Their conversations go beyond the nuances of ELA standards and they participate in an inquiry cycle that allows them to explore the content deeper and make text-to-text, text-to-self, and text-to-world connections. Deion also knew that there was a chance some students would have difficulty transferring these skills to state mandated tests due to lack of test prep time. But even during an unprecedented year like 2020, 85% of his students passed the End Of Course assessment, with a 77% passage rate of students with disabilities or who are multilingual learners. In fact, his students scored on par with the district and state and demonstrated the highest growth across all tested subjects despite the restricting modality of remote learning.

“As my students move on to the upper grades, I am worried that they could lose the momentum due to teachers who are fearful of deviating from the curriculum,” says Deion. “I know that as an antiracist teacher-leader though, it is my duty to ensure that culturally responsive methods sustain this progress and reach all learners.”

It’s this commitment that propelled Deion to found and chair his school’s Diversity, Equity, and Inclusion (DEI) committee. This group of staff members support one another as anti-racist teacher leaders in a school that predominantly serves Black and Latinx students. Although he admits the process was, at times, uncomfortable and frustrating, the DEI committee has led to the restructuring of roles and expectations of school leaders to prioritize multiculturalism and diversity, so students see themselves represented in the classroom.

Deion’s commitment to his students is unmistakable. When offered the Chair of the English department he turned it down because it would take him out of the classroom. What’s more, he has recently relinquished duties as the DEI Committee Chairperson. “I recognized that I was upholding the same systems and structures I wanted to dismantle,” he says. “For example, I was the only male on the committee and leading the committee. Still, I am working to bring about positive change and I am excited about where our work will take us in the 2021-2022 school year—and beyond.” 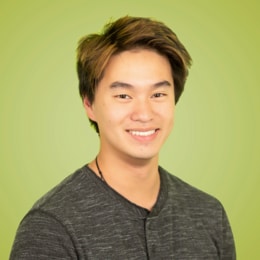 Like all teachers, Glenn Huang takes his responsibilities to provide opportunities for academic, emotional, and social growth seriously. But he has a particular vision for impact that centers on teaching advocacy so that students may develop into leaders and changemakers in their communities.

Glenn has positioned his curriculum to push students to think more deeply about their place in their local and national communities, fostering personal awareness and their sense of social responsibility. Building social agency is one of the most fundamental pieces of his teaching—giving students that revolutionary confidence that their actions truly can make a difference in their communities.

He created the first student government at his school, letting students advocate on behalf of their classmates on the issues that mattered most to their daily life. From there, he expanded to a series of projects that students across grades 1-7 have participated in, advocating in the 2020 Presidential Election and on DC Statehood as primary examples. In these projects, students begin to see how their daily learning in math, reading, and more can integrate with real world issues, and build the all-important confidence that their actions, and they themselves, matter.

He says that from the moment he stepped into the classroom, two things regarding anti-racist teaching quickly became clear: first, that it would be a commitment and journey that would never truly be “done” or “completed,” and second, that it was absolutely nonoptional. “As I continue to develop my identity as an anti-racist educator now and for the rest of my career, my immediate goal is to continue to support my students as advocates, building in more opportunities for them to work towards liberation for themselves and their communities.”