Language: Both Learned and Loved

Jonathan Hall (OKC ’17) writes about the impact of certain students, and why this work must continue.

As part of our New Power Fellowship Program, Teach For America Oklahoma City asked corps members to share stories of impact in their journey to education advocacy. 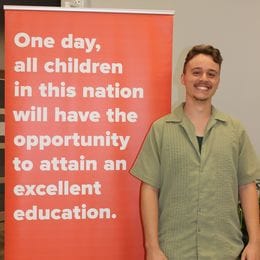 I shall be brief. And yet to state anything less, would suggest that this experience hasn’t been the most trying of my mettle. Many a day I doubted.  My efficacy. My resolve. My worth. And, no, there is not some defining moment of epiphany in which all turned around and was made well. It was rather in the example and resolve I could draw from but a couple students that constructed the fortitude and actualization thereof to continue on and improve.  My first year—writing this now in the midst of my second—I had a student I refer to here by the pseudonym of Jay.”.

Jay was troubled, to say the least. Wrestling with mental illness, uncertain self-esteem, harm of many breeds, and trauma (with more to be sure) his endurance thus far into elementary school was nothing short of Herculean.  And so he would defy; he would provoke; he would display his pain. As one might have surmised, Jay tested me daily. Yet in our own way, such initial strife turned in to a dynamic of mutual understanding. Ours was initially just a gap of knowing one another, and before likely Jay or I planned on it, we got to know each other very well sitting on the hallway floor, he in tears and I beside him, rigid in uncertainty of how to help, in the fall of that year. That conversation that student and I traversed that day and many other when he would suffer from breaks and episodes beyond control shall ever remain between us, and though we likely cannot recount word for word what was said or not said in the space between, a gap that was before was no longer when we got ourselves off that smooth, speckled tile.

What bridged that gap, ultimately, was language, of a sort. And no it was not that there was some language barrier in the traditional sense but rather voices of care and respect take much time to translate. To use the concrete form of traditional language as an example, I myself grew up in a bilingual household. Even though the languages I spoke were somewhat related and one being the common tongue in this country, there was always a part of me underserved. To have one’s brain split by the experience of only, at best, ever telling a partial story with a partial vocabulary, agonizingly holding one’s other tongue when the dominant language solely is called for, inevitably tells a young person that the very sounds they are composed of bear no resonance in the wider world.

Working now especially in a school where a student that I have come to know (at a different grade level; we shall call him Oz) has spent only months in this country around the English language and yet is expected to understand all the cultural and normative nuances, simply confounds me. Oz’s understanding of personal space has landed him in more trouble than he has been led to know. Sure, some of his more touchy tendencies have come from the environment of his upbringing and the trials thereof, but still to correct a wrong without even using the very language a child knows is tantamount to trying to teach someone to type a full novel: conceivably possible, but not probable. Thankfully I have the fortune to speak Oz’s native language, and he tolerates my cumbersome syntax. I only hope others over the years may get to communicate with him in like manner. As such, whether language and expression is inhibited by trauma, as with Jay, or with speech, as with Oz, the same potential to, far too often, silence represents a profound risk, one which we all have a calling to subvert. To not be heard for those two students and so many like them is to walk into the deepest and most unsure of valleys.

Education shall likely be ever more trying as the years roll on, but roll on they shall; for if I can have the fortune to know those like Jay, like Oz, and like all the other that come yet since, then all shall be well for us both.