Indy’s Leading Changemakers: ‘Bringing My Full Truth To My Classroom’

For Pride Month, 2017 corps member Abi Bouwma speaks to the challenges she's experienced as an LGBTQ+ educator and the meaningful ways she's working with students and our community to foster a more equitable and inclusive future. #OneDayIndy 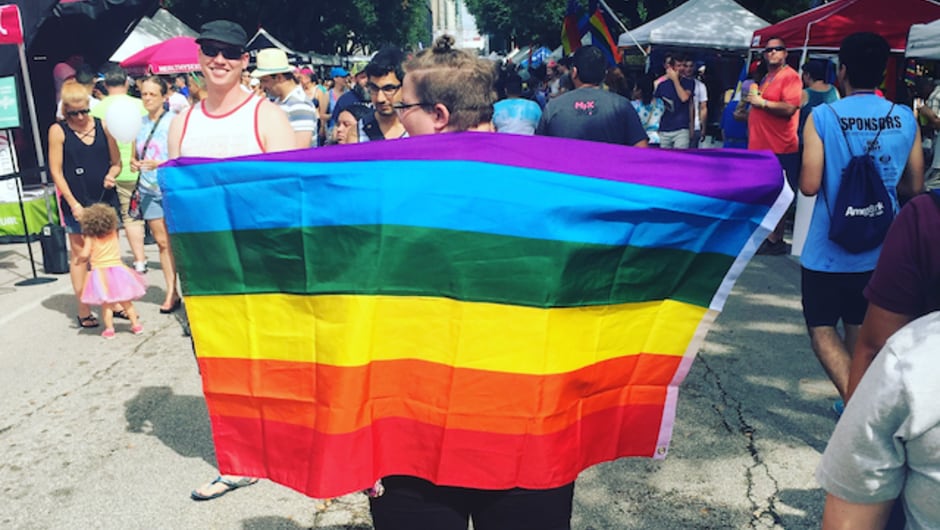 This year has been a study in navigating identity in the classroom and the one identity that I didn’t always explore in my classroom was my sexual identity.  Identifying as queer and working with children, in my experience, do not coexist peacefully. When I was growing up, it was frequently a topic of conversation at family parties which educator, administrator, school board member, doctor, or any other professional was now facing criticism because of their sexuality.

All year I’ve watched a story of a Texas art teacher who was forced on administrative leave from her position in a public elementary school for sharing a picture of her and her now-wife during the first few days of school. According to the Daily Beast, the school district told this teacher that she could not “promote her lifestyle in the classroom."  This teacher was shamed for being a queer role model for her students, and this nationally-publicized story sent a message to LGBT+ teachers across the country that we are not acceptable for students.

If I have spent my whole life hearing and witnessing these painful attitudes, how was I supposed to overcome them to bring my full truth to my classroom?  I’ve wrestled with this question all year and, in full honesty, I am far from having an answer. One of the major issues I dealt with in my classroom and in my school this year was the balance between speaking my truth as a queer woman weighed against the sense of self-preservation.

In college, it was always my goal to be this awesome teacher who lived out her queer identity and helped students discover the beauty of difference in the world.  Rainbow flags on my classroom walls and all. As I stepped into my classroom and out of the ideal growing space that was my university, I realized that it was not going to be quite that simple.  I had to confront how my identity was going to live in a classroom where students were coming with ideas ranging from open and accepting to downright homophobic. On the first day of school, I stood in front of a microcosm of the world with every possible opinion on my sexuality represented.

I worked my way around this by starting at square one.  For weeks, we worked on speaking to one another with basic respect for humanity.  I learned the hard way more than once that if you ask a 14-year-old, “How would you feel if someone said _______ to you,” they will reply with something off-the-cuff and not what you intended.  I found a creative way to use What Would You Do? videos and PSAs to bolster classroom discussions about the way we talk to one another. In the end, my biggest challenge was not in my classroom.  At the end of the school year, whole classes of students would jump to correct disrespectful and homophobic language with perfect synchronicity before I could respond. It was the most ideal situation I could dream of, where my identity was respected because my humanity, and the humanity of students in my room, was respected.

My biggest challenge was adults who, while not being outright hateful, perpetuated bigotry daily.  Other adults told me to my face that they would not interrupt homophobic or disrespectful because of their personal beliefs about sexuality, language, or who deserves respect.  Ultimately, this is a challenge I am still dealing with.

“If I have spent my whole life hearing and witnessing these painful attitudes, how was I supposed to overcome them to bring my full truth to my classroom?  ”

My membership on the board of PRISM is actively helping me deal with those challenges.  PRISM works to make our schools safer places for LGBT+ youth through three foundational pillars: advocacy, community and network building, and leadership development.  Through PRISM, I have gotten the opportunity to lead three Safe Zone trainings (two at Teach For America and one at my school) and have access to the network of growing community partners in Indianapolis committed to making our schools places where all children, regardless of gender or sexual identity, have access to a quality education.

Ultimately, this year has provided opportunities for me to learn about how my identity lives in my classroom just like I tried to provide the same opportunities for my students.  At the end of the day, what is most important to realize is that the work is not done. We have taken so many steps forward as a community in embracing people of all gender and sexual identities, but even as we step forward, there are so many powerful people pulling us back.  It is critical that we as community members and coalition-builders remain steadfast in the work of affirming all students in their identities and bring the vision of One Day to fruition for all of them.