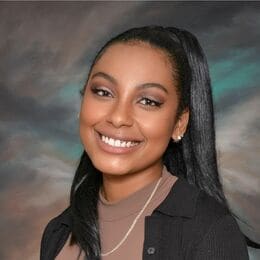 It’s no wonder Devanee Matcham holds the honored title of favorite teacher for many of her 5th-grade students at Arts in Action Community Charter Elementary School in East Los Angeles. As a Resource Specialist Teacher, it’s her job to “make sure that students enrolled in the general curriculum have access to what’s being taught,” she explains. Her role involves working in small groups or one-on-one with students with mild to moderate learning disabilities. Sometimes this means “pushing in” to provide individualized support in general education classes, but more often, she pulls learners out to work on specialized lessons in her shared classroom. The change in setting allows a more personalized learning experience tailored to each student’s needs.

Devanee’s classroom is exceptionally organized and packed with colorful trackers, learning aids, and educational visuals making the space both energizing and exciting. Over the years, she collected best practices for creating engaging learning environments as a teacher’s assistant and tutor for a Special Education course in college and through Teach For America’s summer teacher training program. For Devanee, it’s all about using every tool available to ensure students can learn according to their needs and strengths. “I respect the way that special education students are taught in many different formats at the same time,” she shares. “The work is differentiated; it follows Universal Design for Learning (UDL).” UDL, which she heralds as the gold standard for instruction, is a teaching framework where educators develop customizable goals, assessments, instruction methods, and materials to meet individual needs. “I believe all teaching should be based on using students’ strengths to teach them the content, and that's what we do as special educators.”

“I believe all teaching should be based on using students’ strengths to teach them the content, and that's what we do as special educators.”

Devanee implements UDL in her classroom every day. Her 13 students have different “superpowers” and her highly-differentiated lessons enable them to lean on their strengths to enhance their learning. She offers students the chance to choose how they engage with the material, whether it’s a custom worksheet, following along with an activity on the Smartboard, or using tactile objects to grasp a new concept. Devanee is well acquainted with the statewide grade-level standards her students work hard to meet. While the list is long and daunting, just like in her lessons, she breaks each standard down bit by bit to set achievable goals for her fifth-graders. “I didn't realize how much K-12 students learn in one year, actually in just one day!” she exclaims, “There are so many standards. I know we need to slow it down for these students. I have all year with them.” When it’s time to test students who show signs of being able to meet or exceed a statewide standard, she allows them “different options and ways to demonstrate learning.” It’s not “one size fits all,” she notes. 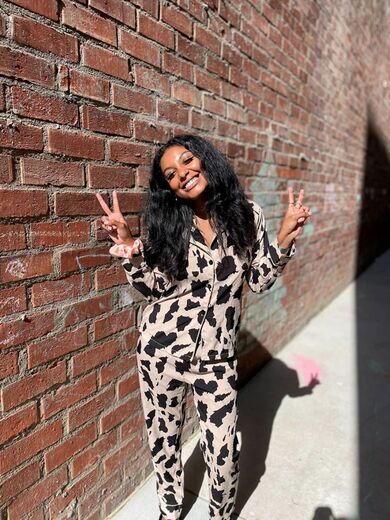 Devanee showing her spirit during her school’s pajama day!

Although it’s only her second year in the classroom as a special educator, Devanee has tried and true methods that contribute to her students’ success. The most valuable tool in her bag of tricks? Incentives. “I believe students should be rewarded for the work that they do on a daily basis. I go to work; I get paid,” she explains. Traditional teaching methodology still follows the same pattern it has for over a century–an educator teaches a new subject, there is some sort of assignment, and eventually, a test. Devanee thinks this method does not always spur students’ interest, especially children who are struggling in school. “There's no motivation, especially when you're working with groups this young. They're not thinking about college. They're not thinking about middle school!” she laughs. Her incentive strategy is robust with daily, weekly, and monthly programs and includes a prize wheel, a monthly movie screening over lunch, a snack box, a fake money system called ‘Match Money,’ stickers, and more. Students are evaluated across several metrics, including participation, how they treat their peers, their behavior outside of class with Devanee, and if they complete their homework. “I found that negative reinforcement drives the students away. They already expect things to be taken away from them. So, I go the other direction and give them something they don’t expect. I never have problems with participation because of it.”

When she first heard of Teach For America, Devanee applied for an internship, not to become a teacher in the corps. “At first, I thought, ‘That sounds interesting, but I don’t want to be a teacher. I'm not going to be a teacher.’” However, after TFA’s recruitment team reached out to see if she’d like to explore the possibility of teaching, the idea began to grow in her. During her junior year of college, she formally accepted her spot in the 2021 Los Angeles corps. It’s a decision she’s grateful for every day. “I never thought I wanted to become a teacher, and I'm forever going to stay in teaching, and special education in particular because it's just so rewarding,” tells Devanee. “As a teacher, you have to realize how important you are to one student's educational journey. You're a whole teacher to them, so I make sure I make it count.”