I Came Out As A Gay Man To My Class

She wrote that she feels safer in school, just knowing that a Gay Straight Alliance exists. 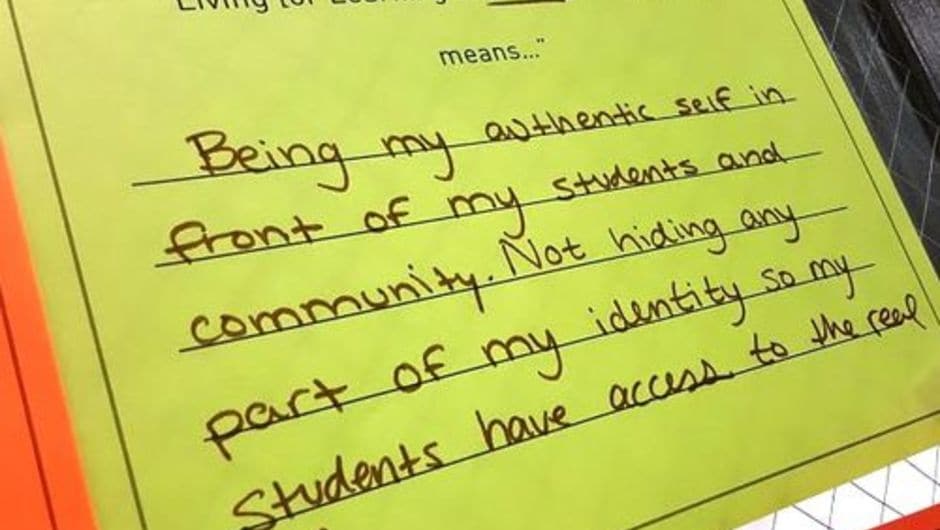 In the summer of 2014, teacher Aaron Bos-Lun wrote about the gay-straight alliance (GSA) he started at his school. Today, he continues his reflection on the path to making his school a safe space for all students.

The big moment came after I came out as a gay man to my classes.

I missed a day because I had been in a serious car accident. When I got back, someone had written: "MR BOS-LUN IS A FAGGOT" on my board and "MR BOS-LUN GAY" on my bathroom pass. I have been called plenty of things in my life and the messages in themselves did not particularly bother me.  The reason this was unacceptable is that 100 students had been in class the previous day. Whether a substitute teacher had let this happen, or whether the class was unruly and someone had done it unbeknownst to my fill in, the message was out there. These are teenagers, so there was no doubt these messages about me had already been discussed widely throughout the school.  The name-calling would be seen as ok—and then talked about as acceptable behavior—unless I responded, and responded strongly. After all, if students think that they can treat a teacher this way, then think of what they might do towards other students.

According to research by GLSEN, the number one reason LGBT students of color report feeling unsafe in school is being LGBT.  Nearly one in three LGBT youth attempt suicide – not think about, but attempt—before age 20. Once people are allowed to call a teacher a faggot, it puts all students at risk. I, therefore, had no choice but to treat this as an opportunity to get an even bigger story out there about how bullying and slurs are unacceptable and use this as a teachable moment.

I spent the next two days doing a whole lesson on anti-bullying—stemming from how unacceptable it is to kick someone while they are down as this student had done.  I also shared my own life experience, the strong link between bullying and teen suicide, how to respond to bullies, and the fact that a slur against anyone is a potential attack on everyone. At the end of the lesson, my students wrote a 10-minute reflection that resulted in some of the most powerful pieces of writing I've received as a teacher. I had many students write something like, "I never thought before today that I shouldn't call people faggots" or “I never realized the things I say can affect people so much” or "I can't say I'm comfortable with gay people but I respect that you're man enough to tell us the truth.”   The most common response by far was thanking me and saying how needed this discussion is in the school.

Two days later, a student I'd never met or seen before showed up at my classroom door. She had three cards for me. The first said MR BOS-LUN ROCKS, the second was a picture of a rainbow that said BE PROUD OF WHO YOU ARE, NEVER BACK DOWN, and the third was a detailed letter in which she told me that she heard about "what I'd done" from a friend, and "it was the first time in my life a teacher has ever stood up for me before." She wrote that she wants to attend the GSA, but isn't able to because her mom isn't supportive. She wrote that she feels safer in school just knowing a GSA exists. I had never even met her before, yet hearing of my talk meant enough to her that she wrote me three letters.  I’ve arranged for a 1-on-1 lunch with her every month since then.

I didn’t have one issue with bullying in my room for the rest of the year, against LGBT students or anyone else.  One of the kids who wrote "I never thought about calling someone a faggot before today" started coming to GSA meetings with his girlfriend almost every week. He’s now a sophomore and we are still in touch.  I suspect some stuff will surface in the future, but I found in coming out that my classroom culture improved because I had skin in the game. By sharing my stories, students began responding to me better, and many students suddenly felt like they had an advocate.  After all, if a student does not tolerate bullying against someone who is LGBT, they are more likely to not tolerate bullying against all people. I happened to demonstrate that through experience, but that message can be sent in many ways. When an ugly situation presents itself, teachers have no choice but to confront the situation or we must accept that we are inadvertently sending a message that bullying is ok.

The Gay Straight Alliance has flourished and continues to make a schoolwide impact on all types of students.  It is not the Gay-Gay Alliance I first started; we are a place for all students to support each other. I had no idea how much one GSA could snowball, which is part of why I've become so passionate about there being more of them. It has taught me to be genuine, something all kids need to see.  And with being genuine comes incredible power to make a difference in kids’ lives.