Nick Stefanovic (Dallas-Fort Worth '14) reflects on his path to the classroom after serving in the Marine Corps and the core values that sustain his work as a teacher. 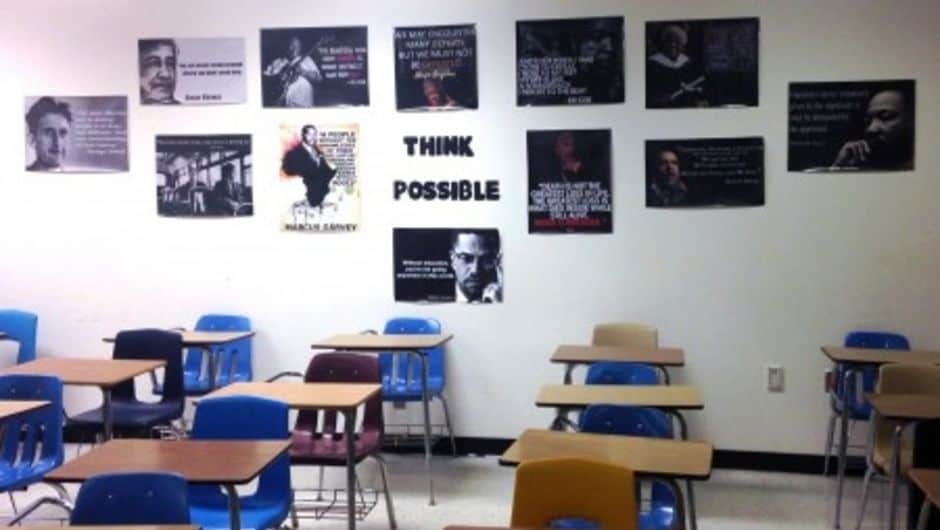 I remember the excitement of graduation as my cohort bragged about their acceptance into Ivy Leagues and prestigious state schools. However, for a young boy who graduated 597 out of 600, such lofty aspirations were not a reality. Instead, this spoiled well-to-do Canadian-turned-Texan opted to enlist in the United States Marine Corps—against my family’s will. As a 17-year-old resident-alien without parental consent, the journey to signing along the dotted line was long and arduous. Luckily, just a few months removed from high school graduation, I found myself standing on yellow footprints at Marine Corps Recruit Depot in San Diego. As a 130-pound Canadian recruit named Nikita, you can imagine how much fun the Drill Instructors had with me.

Three months later, thirty pounds heavier, and standing atop a towering mountain known as “The Reaper,” I was finally pinned with my Eagle, Globe, and Anchor…and called a Marine for the first time. All of this was achieved after besting “The Cruicible,” the culminating test at Marine boot camp, a rigorous 54-hour training exercise demanding the application of everything a recruit has learned until that point in training, including 48 miles of marching while simulating typical combat situations, strenuous teamwork-building exercises, emotional hardship, and the deprivation of food and sleep. Needless to say, I left for boot camp a boy, but came home a man.

Four years of obligated service passed, numerous hours spent training, an Iraq war troop surge, and countless hours spent thinking. Was the military life a fit for me? I had seen friends come and go…forever. I had seen our so-called enemies plead for food and fresh water. I had seen life-long relationships destroyed in the blink of an eye. My realization at the time was that I may be a pacifist at heart, and I couldn’t fathom spending another four years fighting. I decided I would have to make a difference elsewhere; war was not for me. So, in 2008, after my four years of service at Marine Corps Air Station Yuma, Arizona, I was honorably discharged and returned home to Dallas, Texas.

“It is easier to build strong children than to repair broken men.”

In keeping with my dedication to public service, I quickly gained employment as a Direct Supervision Corrections Officer at the Collin County Sheriff’s Office located in North Dallas. The direct supervision philosophy of corrections differs from the norm by literally “locking up” the detention officer inside the housing unit with the inmates. As a 22-year-old I spent 12 hours every day living amongst 72 inmates. I was afforded the opportunity to interact with thousands of people; their stories varied from heartbreaking to maddening. However, it was the unfortunate — and-not-so-rare — conversations I had with misguided teenagers that really had an impact on what I was going to do next. After one year at the Sheriff’s Office I decided to put my Post-9/11 G.I. Bill to good use and enrolled at the local community college. The goal was to obtain a master’s degree in forensic psychology. I was driven by the empathy I felt for those teens — and an ambition to help change the projected course for youth who had so much potential to become America’s future leaders but were on the path to incarceration instead.

I quickly finished my prerequisites at community college, and in 2011 I enrolled at The University of Texas at Dallas as a double-major in criminology and psychology. In one of my last classes, a Teach For America recruiter gave a small speech and encouraged everyone to apply. I had never heard of TFA prior to that day, and I was immediately intrigued. When class ended I did a quick Google search; it wasn’t promising. The results told me that acceptance rates were low, the preparation seemed inadequate, and the application process was long and difficult. Undeterred by all the negativity, I delved deeper. I read the mission, explored the website, and like the typical college student, I searched for some scholarly peer-reviewed literature on the success rate of TFA teachers and their classrooms. Soul-searching had commenced, and it wasn’t until I ran across a quote by Fredrick Douglas that I realized how dramatically my life was about to change; "It is easier to build strong children than to repair broken men."

“I don’t think I would have been successful in my first year without the Corps Values I was taught in the USMC: Honor, Courage, Commitment.”

Graduate school would be put on hold. I applied to become a 2014 TFA corps member and was accepted to teach in my hometown of Dallas, Texas. I would be teaching High School Social Studies, and I couldn’t have been more excited.

It was spring of 2014. TFA Summer Institute was upon me. I had heard some horror stories about the difficulty of Institute. It was challenging, but not nearly as difficult as the boot camp I had experienced earlier in life. I received my first phone interview from a principal at Lincoln High School in South Dallas. She introduced herself and asked me to role-play a scenario with her.

“Mr. Stefanovic, you’re passing out an assignment one day and a student tells you to shut up and leave. How would you react?”

I was shocked, but I knew exactly what I would do. My answer involved not giving up on any student and continuing to attempt to build a relationship. Within two minutes of completing the phone interview, the principal called me back and offered me a position as a Government/Economics (12th graders) and World Geography (9th graders) teacher at Lincoln High School. I gladly accepted.

I often describe my first year of teaching as the most difficult thing I’ve ever done in my life. I don’t think I would have been successful in my first year without the Corps Values I was taught in the USMC: Honor, Courage, Commitment. I certainly believe that my military service taught me more than just the Corps Values though. The Marine Corps taught me empathy, it taught me compassion, and it taught me responsibility. As an educator, I often reflect on my time in the service, and on my childhood as a whole. As a white male raised in an affluent community, I squandered so many opportunities—opportunities I assumed every child had. As I begin to reflect further on my journey to becoming a teacher, I become even more passionate of my role in TFA and my role within my new community in South Dallas.