Barry Glasser (Rio Grande Valley '14) left the entertainment industry to join Teach For America. He soon discovered his next cast and crew were hiding in plain sight. 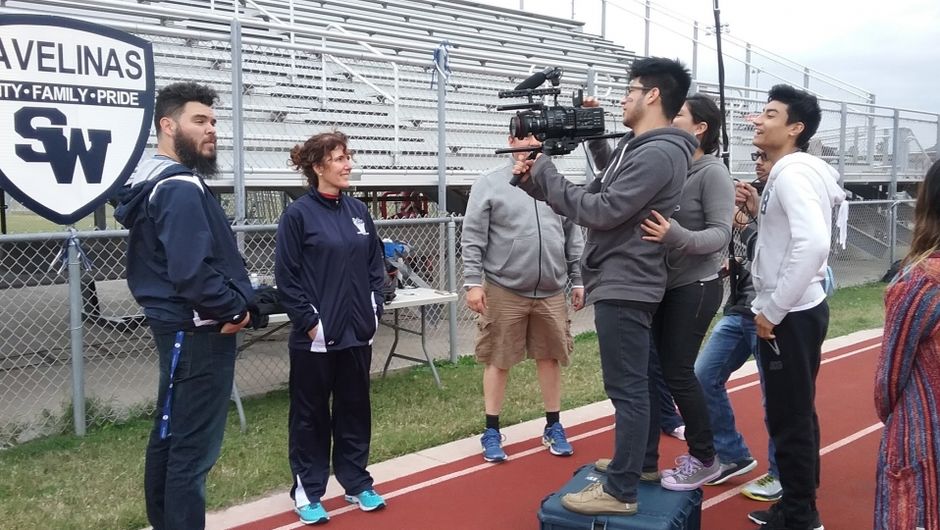 The Rio Grande Valley is a long way from Hollywood, but if you ask veteran screenwriter Barry Glasser, the two settings aren’t that different.

“The first time I got here, I actually thought it was like [Los Angeles],” he remembers. “The climate’s like L.A., with the palm trees and sun. The Hispanic culture is strong here. Everyone drives, and it’s one mall and drive-in restaurant after another. I didn’t feel out of place at all.”

“Later on in my career, I learned about Teach For America, and I met a couple of people who had also told me about the program,” he says. “Initially, I applied to TFA and was accepted [in 2014] thinking in the back of my head, ‘I’m going to write about what it’s like to be a teacher.’” 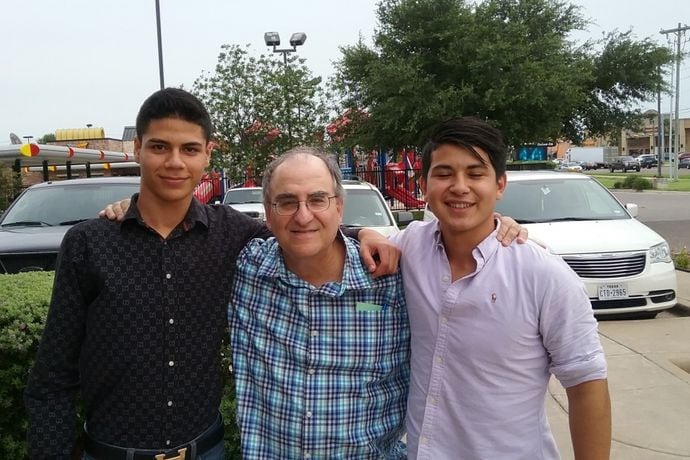 Of course, as any educator knows, adjusting to your first year of teaching in a new community doesn’t leave much time for leisure. Glasser, who was assigned freshman English in his first year at Pharr-San Juan-Alamo (PSJA) Southwest Early College High School, quickly learned he was not the exception to the rule.

“As I got more into it, I loved teaching for the sake of teaching and realized that I wouldn’t be writing anything about it because I was so consumed by the teaching,” he admits. “It’s a lot of work. But gradually, I said to myself, ‘There has to be a way to combine my film background with what I’ve encountered on campus.’”

In Glasser’s second year of teaching, he met fellow faculty member Sarvelio Carreon, who just happened to be a former research director for Univision and production manager for TV Azteca. Almost fatefully, Carreon was teaching an audio and video production class three doors down from Glasser’s senior English class.

“He showed me all the equipment he had,” Glasser recalls. “They had been doing some short films, and he had cameras with lenses that were the equivalent of anything I had ever seen in Hollywood or in my own films. And he had the most modern post-production equipment so you could do all sorts of editing right there.” 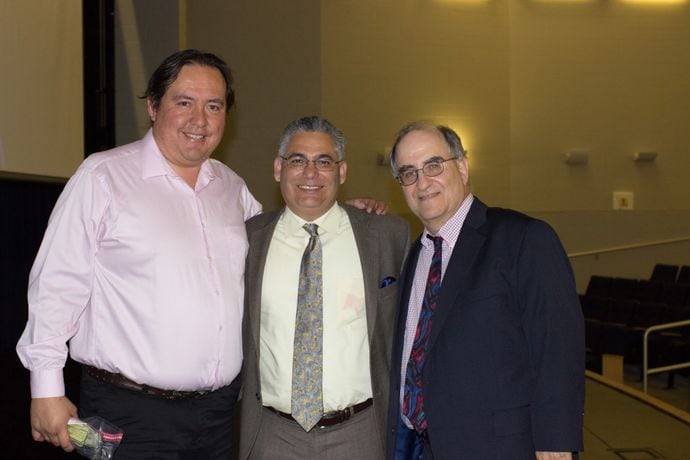 Carreon and Glasser fortuitously joined forces. With 80 students joining the pair’s newly founded PSJA Southwest Film Society, the stage was set for an audacious endeavor—a full-on feature film with an all-student crew for professional distribution by a Hollywood company.

It wouldn’t be easy starting from scratch with such a green cast and crew, but Glasser drew inspiration from his own teenage days in Syosset, New York.

“The most influential person in my career was my high school English teacher, James McPartlin,” Glasser notes. “He told me, ‘Barry, you’re not going to be a lawyer. You’re a writer.’ He saw that in me. He told me it was OK not only to have that dream, but to pursue that dream, and because of him, I got my graduate degree in English rather than go to law school.

“I never forgot that, and I always realized that the role a teacher plays in a young person’s life can be a monumental, and as TFA would say, a transformational role. I knew in taking this job in the Rio Grande Valley, I’d be uprooting myself, but if you don’t take risks in life, you won’t achieve big dreams. I wanted to pass on that mind set to my students.” 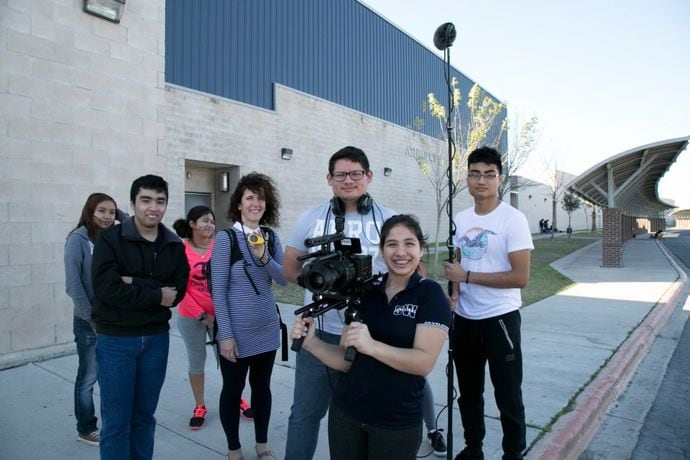 Since the project began in December, Glasser has witnessed signs of that same impact on a collective level.

“They’ve become a well-oiled machine, and they’re as capable and prodigious as any group of crew members that you would find on a Hollywood sound stage,” he raves. “They now see that it’s possible. They wouldn’t have thought before that they could have a dream like that. It’s too big; it’s unrealistic. Now they have the experience of making a film.

“They’re not the same kids when we started. Instead of us calling the shots, now we ask them how they want to stage the scene and which lenses to use. Now they don’t see themselves as followers, but leaders.”

Another example of this change occurred when Glasser, through a program sponsored by the Academy of Motion Picture Arts and Sciences, organized a Skype conference call for the students with critically acclaimed actor Edward James Olmos.  Olmos is well-known in the Rio Grande Valley community for his roles on the silver screen as legendary math teacher Jaime Escalante and Abraham Quintanilla, father of the late Tex-Mex music icon Selena.

“They talked for well over an hour, and he was so impressed with our students because they were asking him such intelligent questions about the filmmaking process,” Glasser says, proudly. “They engaged him as a colleague, and I wanted them to feel they were on the same level as a Hollywood professional. They hung up and were on cloud nine.”

The end result, now in post-production, is the full-length feature “Time for a Champion,” which is based on Glasser’s original screenplay. The story is about a homeless Latina high school student who overcomes poverty and neglect with the help of an adoptive family. Eventually they steer her toward the sport of track and field—and discover her uncanny gift.

“I think it’s a story that any student will relate to,” Glasser opines. “Also, because it’s set at a high school, where all the parts are played by actual high school students, and the crew is made up of high school students, we think it’s going to resonate with teenage audiences who will see themselves on the screen in a way they previously haven’t. There’s nothing Hollywood about this. It’s entertaining, but it’s very real.” 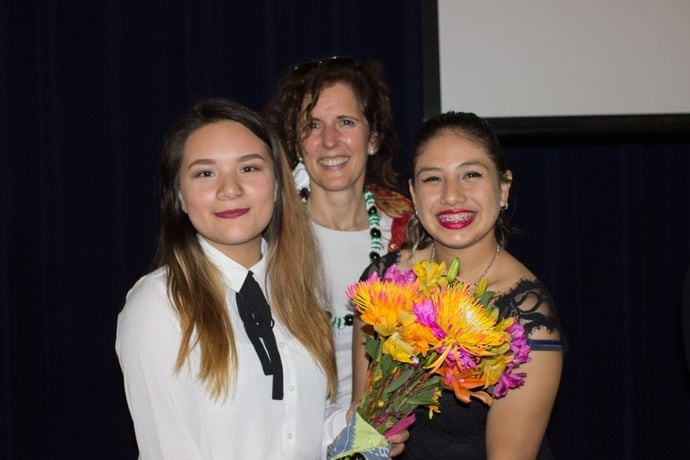 From left to right: Stars Sheila Martinez and Maria Del Mar Fresno, and cinematographer/editor Jackie Martinez at the post-screening reception.

“Our school district is solidly behind us,” Glasser continues. “They see this as a flagship program that can become a model for high schools and colleges everywhere.”

In other words, the members of the PSJA Southwest Film Society aren’t stopping with “Time for a Champion,” which now has its own IMDB page. Rather, the plan is for it to be the first in a series of feature films with the students. Glasser has already found a distributor, World Wide Motion Pictures Corporation, for their maiden voyage.

“The distributor will decide which theaters to go into, and which streaming companies to approach,” Glasser says. “We also made a co-production deal with the school district so that they’ll share in the profits, which is only fair. When the profits come back to students, it will come back in the form of a scholarship fund.” 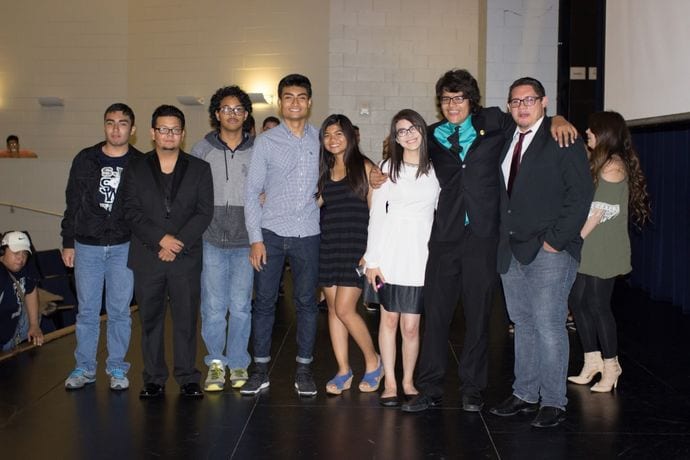 The present and future at PSJA looks promising, and such outcomes would not have been possible without Glasser, who feels fortunate that he had the opportunity to join the teaching profession this late into his career.

“I was always mystified why there was an impression out there that TFA was only for people who were beginning their careers,” Glasser says. “It’s a great way for people like me who have had some success in other sectors and now want to use that wealth of experience and wisdom to help kids who not only want to be inspired, but will inspire. It’s given me a second wind. I can’t wait to start on the next film." 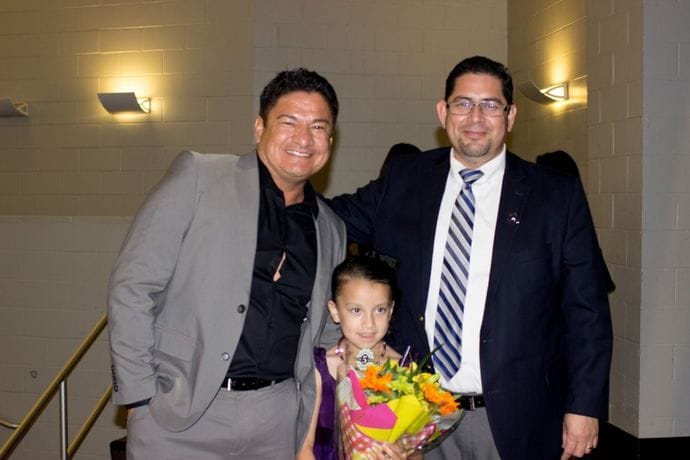 At the post-screening reception, from left to right: Richard Lucero, assistant principal of PSJA Southwest High School who plays a leading role; his daughter Laurenne, who also appears in the film; and Southwest principal Ranulfo Marquez.