From the beginning, part two: Corps members share their first year of service

An interview with Citlalli Celis (Idaho ‘21) 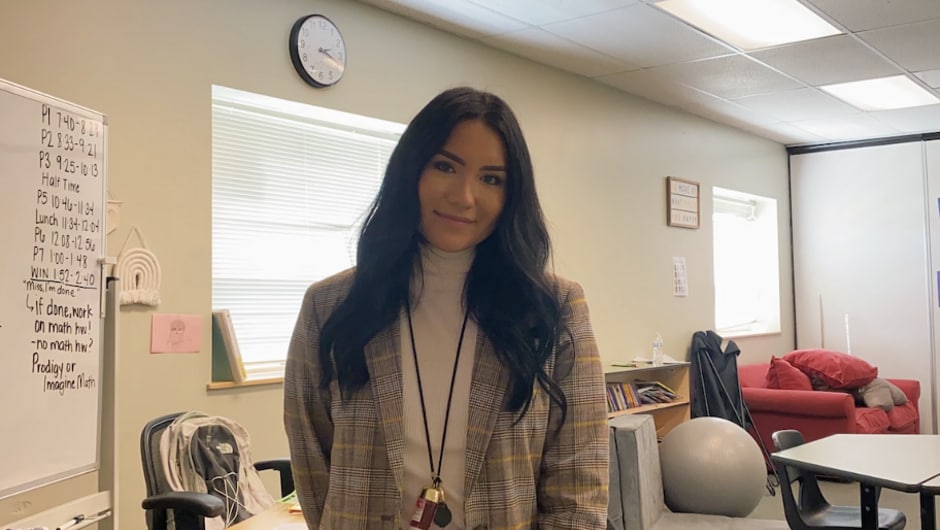 Over the course of this school year, Teach for America Idaho is featuring interviews with two entering corps members, to track in real time how their experience is progressing as they begin their teaching careers.

The first interview with Citlalli Celis took place shortly before the school year started. You can read it here. The interview below took place in January, after Citlalli had completed her first semester as a TFA corps member and had some solid experience upon which she could reflect. She is a special education teacher at East Valley Middle School in Nampa.

Citlalli is from Phoenix, Arizona, and graduated from Arizona State University, where she majored in family human development and sociology. This interview has been edited for length and clarity.

TFA: Hi again, Citlalli. It’s good to have a chance to check in now that you have a semester-plus under your belt. When we talked last fall you said the biggest educational challenge you hoped to address was “to help break the negative stigma special education has,” and building connections with your students and their families. How has that gone thus far?

Citlalli: So far, breaking that stigma has been a challenge. Despite that, I think my students have really learned to realize their potential and that these IEPs (Individualized Education Programs required by federal law for all special education students) are there to serve them. Not as a boundary but more to help them get further in their education career. Although it has been a challenge, it's definitely a challenge that my students have been able to overcome, slowly but surely.

As for family connections, that has gone really well. I  have a primarily Spanish-speaking caseload; a lot of my families speak Spanish only. And knowing that I speak Spanish has been good for them; it’s something that they haven't experienced before, so it has been a great way to establish a connection. In a lot of cases I am the only Spanish-speaking teacher their children have ever had. I’ve gotten comments that are basically a sigh of relief. “We're happy to be able to establish a connection with a teacher who speaks Spanish and is able to communicate with us in our primary language.”

TFA: That’s good to hear. Going back to your first point, why do you think breaking that special education stigma has been a challenge?

Citlalli: It's the judgment of being labeled as a special ed kid. Especially in middle school, a lot of my kids are entering their teen years and teenagers want to be labeled as cool. They don't associate a special ed classroom as being a place where the cool kids are. So being in that classroom comes with a lot of judgment from their peers.

TFA: Now that you’re a semester into teaching, have challenges arisen that you perhaps didn’t anticipate?

Citlalli: Teaching after COVID or during COVID is challenging for sure. A lot of children came back this year from a year or so of being virtual. This year has been completely in person, so making that turnaround has been a challenge as well.

TFA: Has that created classroom management challenges, and if so, how have you addressed them?

Citlalli:  I definitely struggled in the beginning, the first two months, getting those behaviors set. That was especially true with my kids who might have ADHD or something similar. It was difficult in the beginning, having them in a classroom for 50 minutes. After those two first months or so, after establishing a connection with them and establishing expectations for the work and behaviors it definitely has been a lot less impactful in the classroom, and there haven’t been disruptions as often.

TFA did a really good job during the summer institute in helping us learn how to set expectations and norms. It was a big focus. It laid a good foundation as to what to expect and what to do to combat behavior issues.

TFA: Last fall, when we asked what your biggest worry was about starting your teaching career, you said being able to recognize your own biases and being able to call yourself out on them. How has that gone for you?

Citlalli: This experience has opened my eyes to what special education is and how it functions differently in every school. It has given me a new perspective on how to tackle special education and looking at it more as an aid for students and not as something that holds them back.

TFA:  And have you discovered worries and concerns that you didn’t anticipate going in?

Ctilalli:  I also had concerns going in about being able to establish connections with my students. I really wasn’t sure how to go about it, especially with middle school kids. There's a whole lot of developing going on physically and mentally. Being able to establish a connection is something I’m looking forward to continuing to grow, especially because I keep my same group of kids all throughout middle school.

TFA: Finally, last fall we asked what you were most excited about, and you said learning about the community and creating a safe environment where your students felt cared for. Is that something about which you are still excited? And are their aspects of the job that thrill you that maybe you didn’t anticipate?

Citlalli: I think I've done a really good job with this. It's a lot easier because I have classes that are only around 10 kids or so. It has been nice, because I get to explore those connections in school and also at home, establishing communication with the families for regular IEP meetings. So yes, it has been going really well.