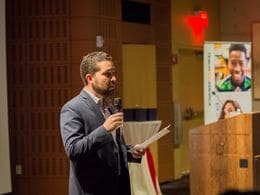 Pat Crowell, director of the Legler Benbough Foundation, was hardly exaggerating when he said the Oscars could learn something from the first annual Innovation in Education Awards held by Teach For America—San Diego. The four educators honored by TFA-SD on Thursday night for their innovative leadership in classrooms have biographies more moving than Hollywood scripts.

Cuban immigrant Aaron Acosta struggled in San Diego public schools as a foster care youth and now teaches math and science at a school with a significant homeless population. Magda Maldonado, a Mexican immigrant, attended schools that tried to rid her of her language and culture – but only provided her motivation to found one of the first dual language charter schools in San Diego.

When first-time principal Carmina Osuna was hired to lead a new school, she used her power to instill a culture of “ubuntu,” where for one student to succeed, all must succeed. Her pupils lead the state in academic growth. USC graduate Michael Tong was on the road to becoming a financial consultant, but is teaching his third and fourth graders to become entrepreneurs using the same technology that start-ups use to pitch venture capitalists.

The Innovation in Education Awards event was created this year by Teach For America—San Diego to elevate the importance of education in San Diego’s economic development and to provide best practices for new teachers.

“The awards are our way of giving educators a standing ovation for innovative leadership techniques and to inspire others to innovate their classrooms.”

About the Innovation in Education Awards
Teach For America—San Diego solicited nominees for the Innovation in Education Awards from across the community. Finalists in four categories were presented to a panel of corporate, non-profit, school and philanthropy leaders, and the winners were announced during a ceremony at the downtown library. Winners received a $2,500 cash award, and Teach For America-San Diego plans to incorporate the best practices into professional development for new teachers. The event was sponsored by ResMed, the Girard Foundation, Nordson Corporation, Northrop Grumman, SDG&E and ViaSat.

“San Diego has a robust technology reputation, and with the right investment in pre-K to college experiences for all kids – regardless of race, class or zip code – our city will distinguish itself as a global leader in the innovation economy. Our winners showcase the best of what is possible,” Lopez said. 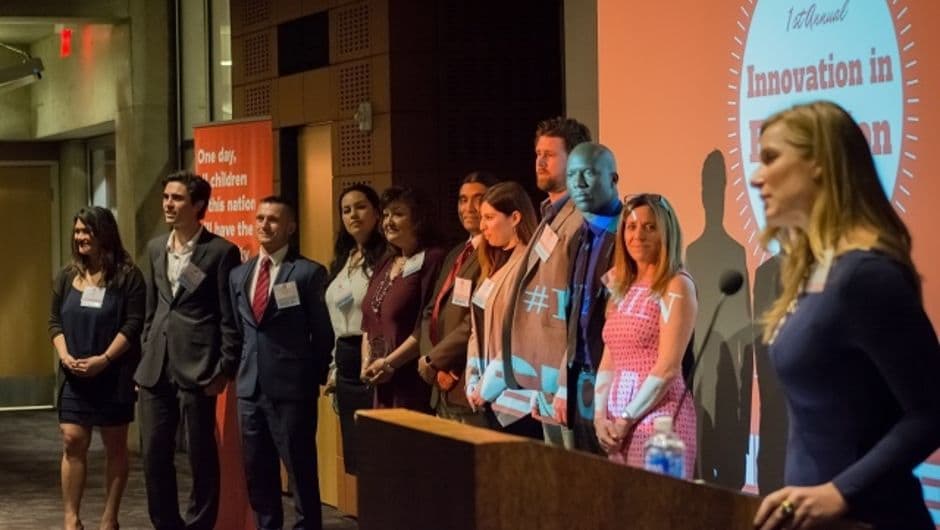 The award finalists pose for a quick photo op!

About the Award Winners

Nominated by Thrive Public Schools School Director Shelli Kurth, Michael Tong (TFA-San Diego, ‘16) won the Legler Benbough Award for innovative use of technology in the classroom. Tong is a first-year corps member at Thrive Public Schools, where he teaches third and fourth graders in a blended, personalized environment. Tong uses Chromebooks and technology to individually meet each student’s academic needs by setting personalized learning plans, which have resulted in his class proficiency average jumping from the 25th to the 34th percentile in just the first half of the school year. His students are currently using LivePlan software to design business plans for new companies that will have a positive impact on their communities. The kids will present the plans to real investors later this month. “It’s all about real world application,” he said. “If this is what college students who are just graduating are using with venture capitalists, who says third and fourth graders can’t use it?” The award was presented to Tong by Pat Crowell, director of the Legler Benbough Foundation. 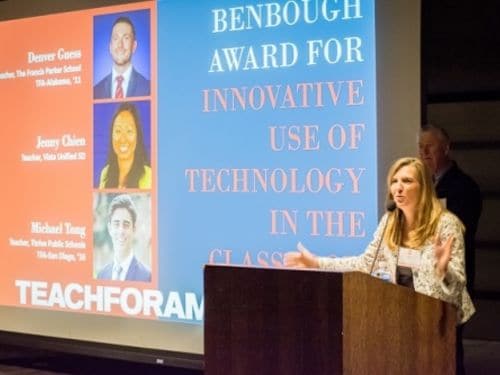 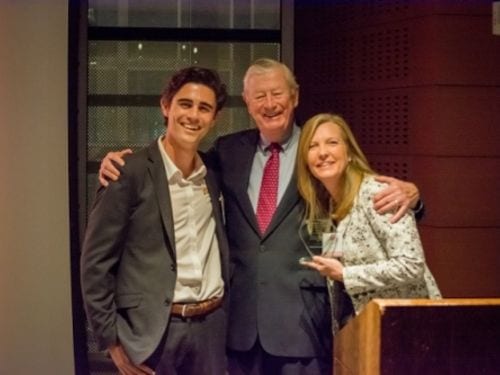 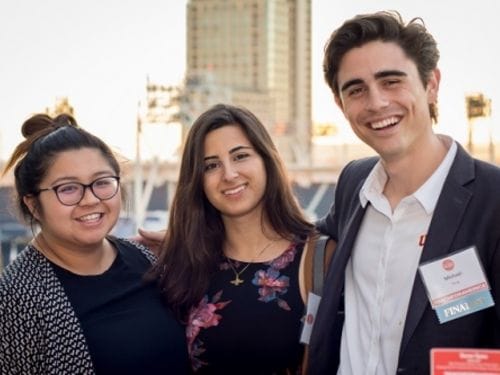 Shelli Kurth announces the winner of the Benbough Award for Innovative Use of Technology in the Classroom.

Nominated by Thrive Public Schools CEO Nicole Assisi, Carmina Osuna won the Jack McGrory Award for innovative alumni leadership. Osuna (TFA-LA, ‘09) is the founding director of Thrive Public Schools’ secondary school in San Diego. She organized her school with an ubuntu or humanist philosophy that focuses on community voice and progress, rather than competition. Her students rank in the top 98th percentile for academic growth. “When we believe success is connected to the rest, it elevates everyone,” she said. The award was presented to Osuna by Jack McGrory and his daughter, Ally McGrory Reyes. 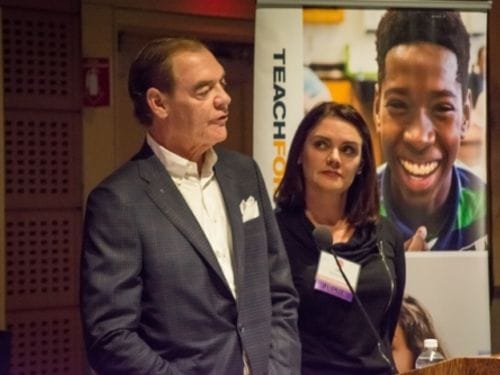 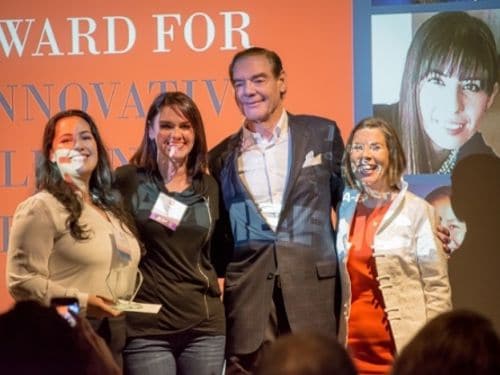 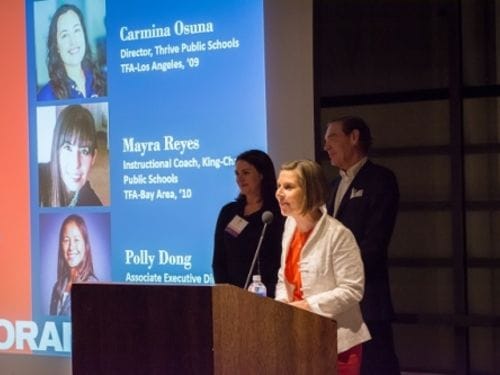 Nominated by Cindy Lopez (TFA-San Diego, ’15), Magda Maldonado won the honorary alumnus award. A native Spanish-speaker and founding teacher at Chula Vista Learning Community Charter Schools, Maldonado was at the forefront of the bilingual education movement. In 1998, amid California’s English-only education push, she helped found one of the region’s first dual language schools. Today it is among 30 dual language schools in Chula Vista. “We showed everyone that poor children and children, regardless of where they come from, can acquire a second language and that our American children can compete with European children,” she said. The award was presented to Maldonado by Patricia Sinay. 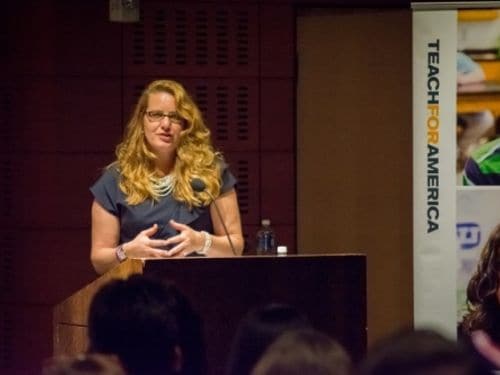 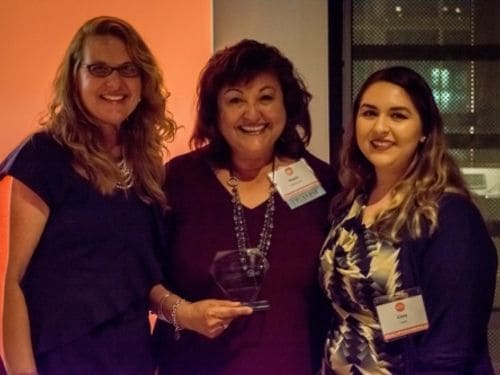 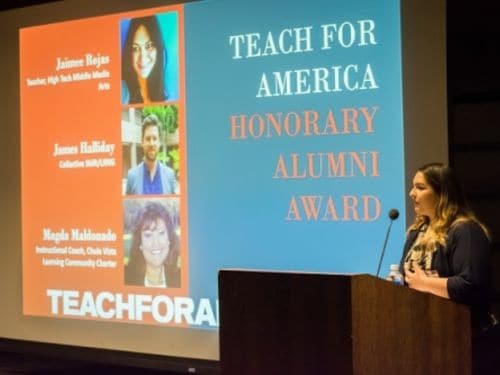 Patricia Sinay announces the winner of the Honorary Alumni Award.

Cindy Lopez shares why she nominated Magda Maldonado for the Honorary Alumni Award.

Nominated by his wife Rachel Acosta (TFA-Rio Grande Valley, ‘06), Aaron Acosta won the diversity and equity award for innovative practices to address student need. He is a seventh grade science and social studies teacher at Grace Perkins K-8 who went into teaching after struggling in school as a foster child. He acts as a mentor to homeless and foster youths. “When they can see that you have been in their shoes, they are able to open up to you more, able to trust you,” he said. “When a kid can open up to you in that fashion, they are able learn. Once you establish a safe learning environment, the teaching is the easy part.” The award was presented to Acosta by Sean McClondon. 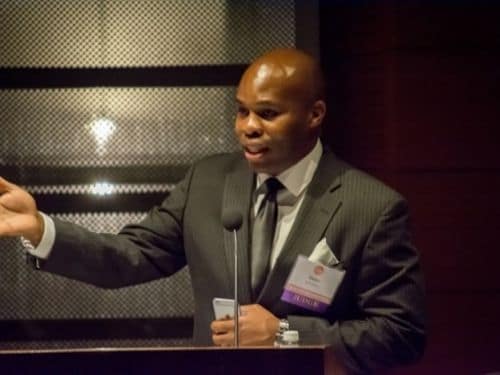 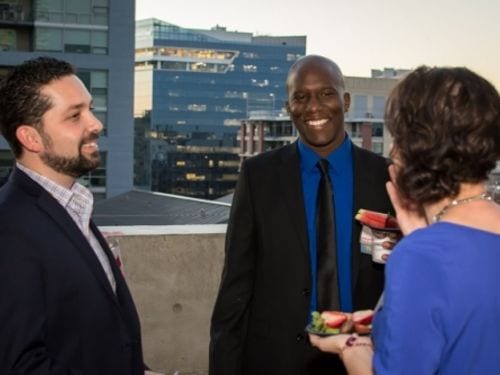 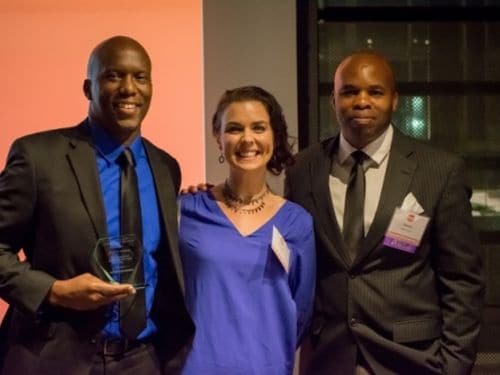 Shawn McClondon presents the award for Innovation in Diversity, Equity, and Inclusion.

About Teach For America—San Diego
Teach For America works in partnership with communities to expand educational opportunity for children facing the challenges of poverty. Founded in 2013, Teach For America—San Diego recruits and develops a diverse corps of outstanding college graduates and professionals to make an initial two-year commitment to teach in high-need schools and become lifelong leaders in the effort to end educational inequity. Today, more than 40 corps members are teaching in 20 schools across San Diego while 300 alumni work both inside and outside of schools to ensure that all children have access to an excellent education. Teach For America is a proud member of the AmeriCorps national service network. For more information, visit www.sandiego.teachforamerica.org and follow us on Facebook and Twitter.