How Sandra Carrillo (OKC ’17) is combining her Latinx history and educational advocacy to lift the voices least likely to be heard.

As part of our New Power Fellowship Program, Teach For America Oklahoma City asked corps members to share stories of impact in their journey to education advocacy. 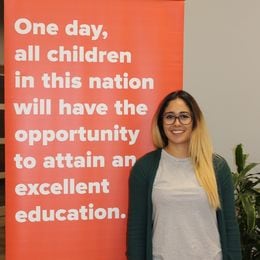 Working with children with disabilities is often categorized as noble work, but few would likely say it informs life-changing career paths, especially when that career is still particularly new.  The work can often leave one mentally and physically exhausted, and burnt out. But this wasn’t true in the case of Sandra Carrillo. In her final year at Colorado State University studying Human Development, Sandra started working with developmentally delayed children, and was transformed by the work.  “Everyday I’d see new ways each student was accomplishing whatever task was put in front of them.” Carrillo writes. Further, she’d see the extension of this effort, and how a lack of communication could warp perceptions, noting how often times other people would not see their capabilities and would overlook them because of their disabilities.

“That is the moment that I decided I NEEDED to go into education.” Carrillo said.

But while ensuring all voices were heard in classrooms set Sandra on her pathway towards Teach For America Oklahoma City, what solidified her decision to pursue it was an even more personal quest: an opportunity to be the representation she’d so valued during her own education. “When I was younger I remember vividly the teachers my parents and I had a great relationship with. Those were the teachers who were Latinx and spoke Spanish or teachers who made an effort to communicate with my parents regardless of the language barrier.”

As the Latinx population grows in the United States, there’s no doubt the need for representation is ever presence, something that’s continuously on Carrillo’s mind. “Students need to see people who look like them in the classroom.” Keeping this in mind greatly impacted Carrillo’s efforts inside and outside the classroom. “This year I’m teaching in Southside OKC, so I am very intentional of communicating to parents and sharing the successes of their child. Many responses that I have gotten from parents is how appreciative they are to having a teacher that can speak the language.”

Sandra continues to engage with both her Spanish and English speaking students and families in her community, but always remembers what truly matters at the end of the day. "Representation is huge and is often times overlooked. Students need to see people who look like them in the classroom."